Another day spent figuring out where to put things. Today’s focus was figuring out what to do for an aft avionics shelf, something that was a lot more challenging than it seemed like it ought to be. For whatever reason, I had very little success finding photos of avionics bays in RV-8. I had the idea of putting a shelf just ahead of the elevator bellcrank, just behind the baggage bay, and I found a photo of someone who’d done that, but it just didn’t seem workable to me, at least taking the simple approach of running two pieces of angle laterally between the longerons to serve as the edges of the shelf.

The problem is that doing that only gives a few inches of depth on the shelf, and both the ELT and transponder are much longer. This seemed problematic enough that I tinkered around with several other ideas, most notably putting the shelf just below the ADAHRS shelf, bridging the middle longerons. This location would provide good access through the baggage bulkhead, but it would put those avionics far too close to the ADAHRS units. Since those include magnetometers (read: compasses), they need to be away from basically anything with a power connection.

So putting the avionics here would require either relocating the ADAHRS, or else additionally using a remote mount magnetometer. Any other ADAHRS location would have been hilariously inaccessible, and the remote magnetometer seemed like obnoxious extra work, though I still considered it as a backup plan.

Finally, I came up with an idea to get better shelf space in the original location. Instead of using two pieces of angle oriented perpendicular to the long axis, I could only have the forward angle like this, and at the rear, have two angle pieces…um, angle in…from the aft bulkhead to a point forward of the bellcrank. This allows for a lot more depth where needed for deep items, even if it does look a little weird.

The piece of plywood I used to mock this up actually has the cutout around the bellcrank a fair bit overdone. More realistically, either I’ll have the two angled lines simply meet at the centerline, or else add a short lateral piece at the place where the angles meet the cutout below: 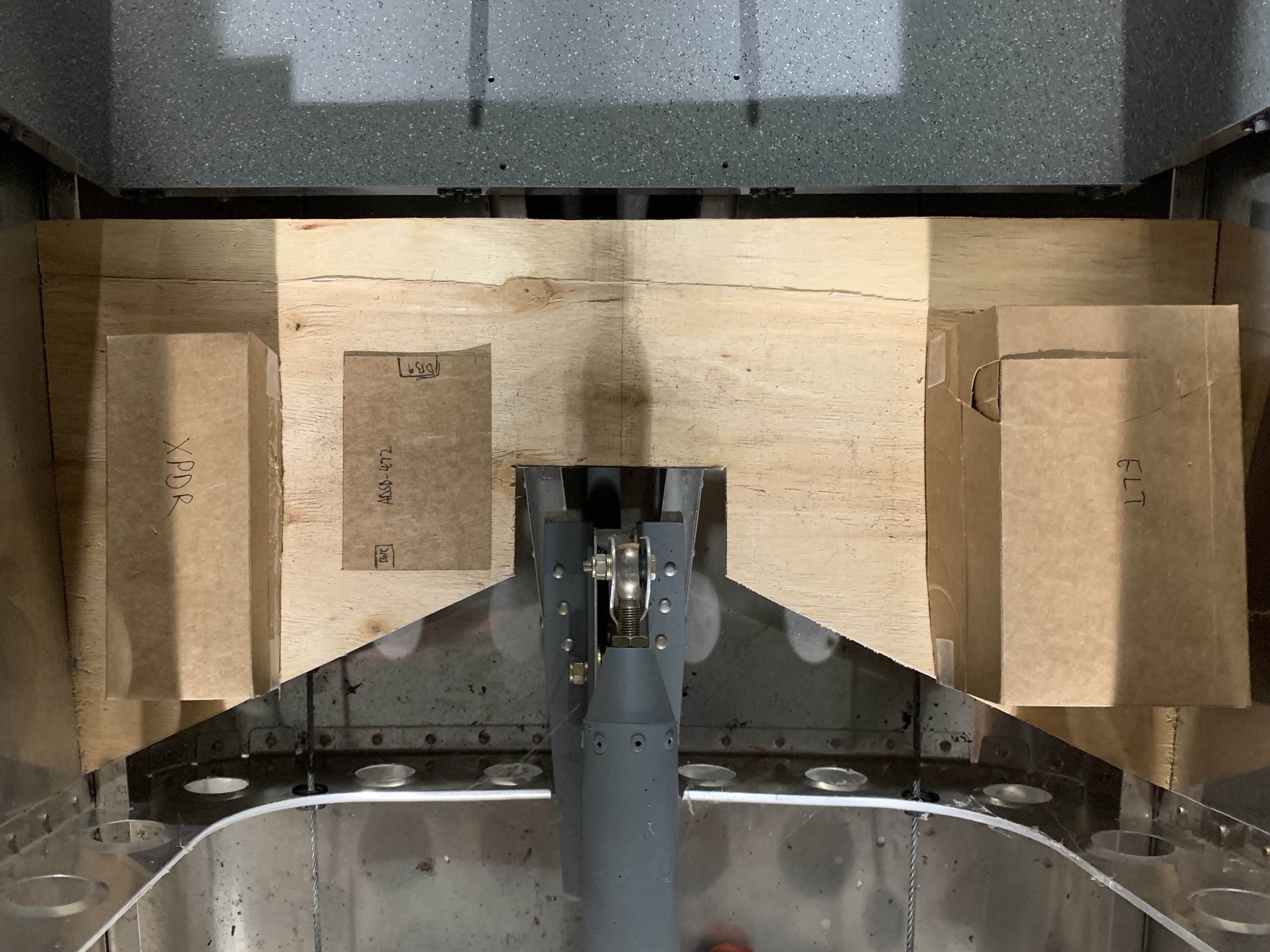 This location provides plenty of depth for the transponder (left) and ELT (right), as long as they’re located outboard. Also shown here is a 2D representation of the ADS-B receiver. This location also provides ample space forward of the units to allow for wiring connections and harness routing. Originally I was going to mount the remote com radio back here as well, but since both the control head and the antenna will be located much further forward, I’m going to prefer putting that behind the panel if possible. If necessary I can still probably fit it back here, too…maybe over beside the transponder. 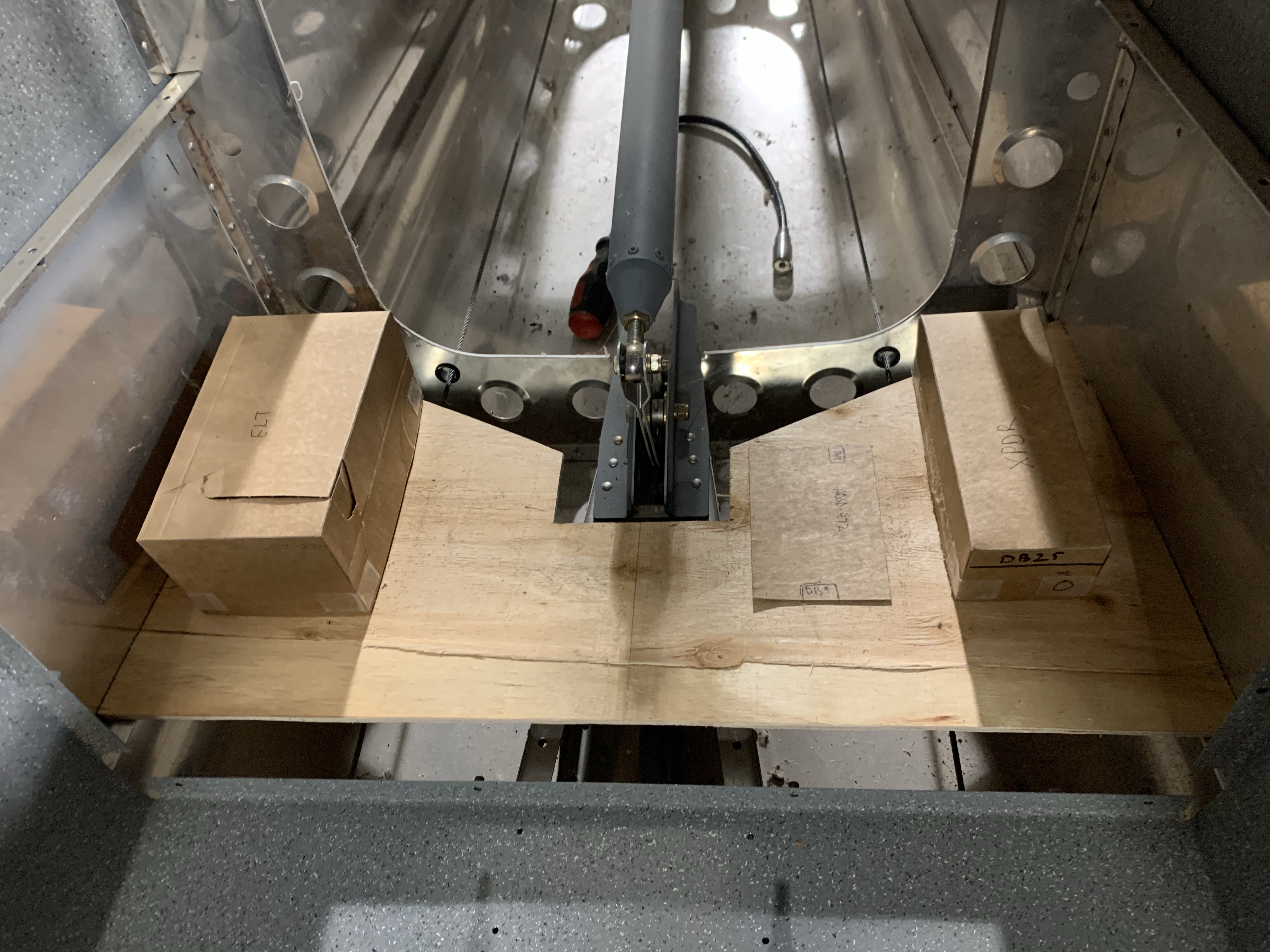 Next up will be figuring out some kind of avionics shelf behind the panel. I’ve got a couple ideas for that area, none of which I’m super enthused by so far, so that’ll probably end up being another bunch of hours spent puzzling over things. I think I’m also going to go ahead and order a few items that I’ll be finding homes for, since they’re relatively inexpensive – I’m specifically thinking of the fuse blocks I’ll be using behind the panel.