For the time being, I’m stepping away from the pitot layout stuff, in favor of a more general look at systems. As I alluded to previously, I’m getting to the point where it’d be nice to have some electrical supplies on hand for stuff like extending the pitot heat harness. But if I’m going to order wire, I’d like to go ahead and do it in bulk, so I’m pivoting to working out my avionics layout so I can then at least rough out all the harness routing and then get a materials estimate so I can order a whole bunch of wire and stuff.

So I started actually a couple nights ago with the arts & crafts portion of this program – making mockups out of cardboard for assorted boxes. At first I was just going to sorta mass-produce mockups of everything, but then it became clear that in most cases, I don’t need a full three-dimensional mock; just a flat box with connection locations identified is probably good enough.

In any case, after making flat mocks of both voltage regulators, I moved on to the ADAHRS units. For these, a three-dimensional mock was called for, since vertical clearance will matter, especially for maintenance accessibility. Then, after making these, there was kind of a pause for some documentation reading and plans changing.

Both ADAHRS units connect to the Skyview system using the Skyview network connection. My original plan was to run a single network cable back to the tail, then add a splitter cable to accommodate both ADAHRS units. However, I’ll also have the pitch servo for the autopilot back in this same area, which also accepts a Skyview network connection, albeit with a couple of pins modified. So if I use the splitter, I’ll still have two cables running back here; I could change that by using a Skyview network hub, which allows tying together up to five devices. I got curious as to how much more expensive the hub was than the splitter cable, and discovered…it’s actually cheaper. Huh.

So yeah, I’m going to put a hub back here, and then I can essentially run a single network cable for everything in the tail, and then branch out from the hub. That, in turn, gave me something else to make a mock for (though just a flat piece in this case).

Finally, I wanted to mock up the shelf on which the ADAHRS and the hub will live. Cardboard didn’t seem like it’d cut it here, but I had some thin plywood scrap that would work well. I ended up having to cut it with a hand saw, since my bandsaw kept throwing the blade (seems the lower wheel needs a new tire). But with that done, I could try laying out the units here to see how it fit together.

Here’s the shelf in place. This is just behind the aft baggage bulkhead, which is convenient for maintenance. Accessing these will only require removing that bulkhead, which is just held on with a few screws. (This glosses over the part where I’ll have to be lying inside the fuselage. The word “convenient” is kinda relative here.) 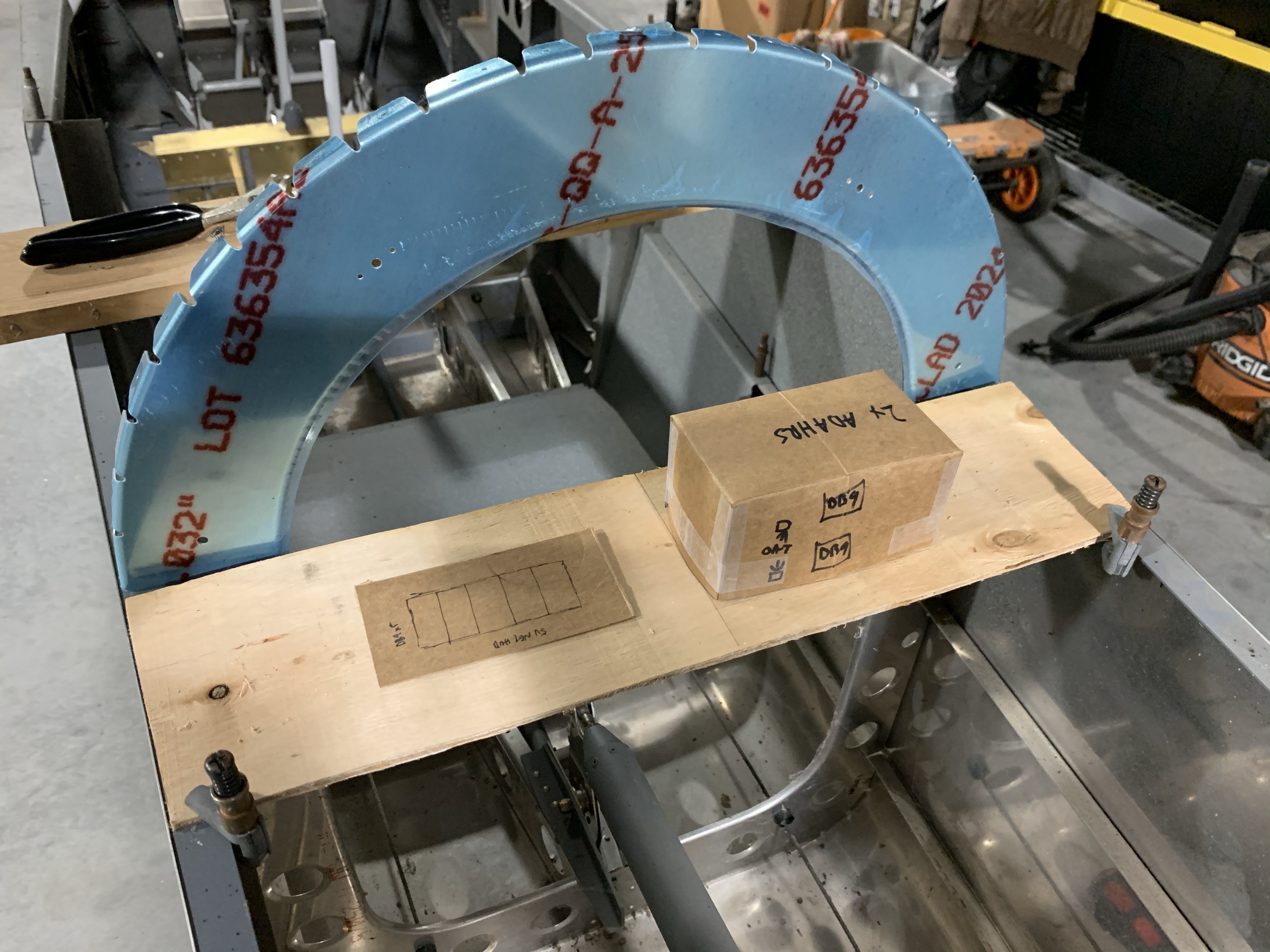 Anyway, with the bulkhead out of the way, I’ll be able to easily get in with a screwdriver to remove a unit for service, and having the hub here will make it easy to add service loops on the network cables. Since the cables attach to the backs of the units, this will allow me to detach a unit, then remove the network cable after pulling it out of the bay a bit. The next photo shows what this looks like from the baggage area, just forward: 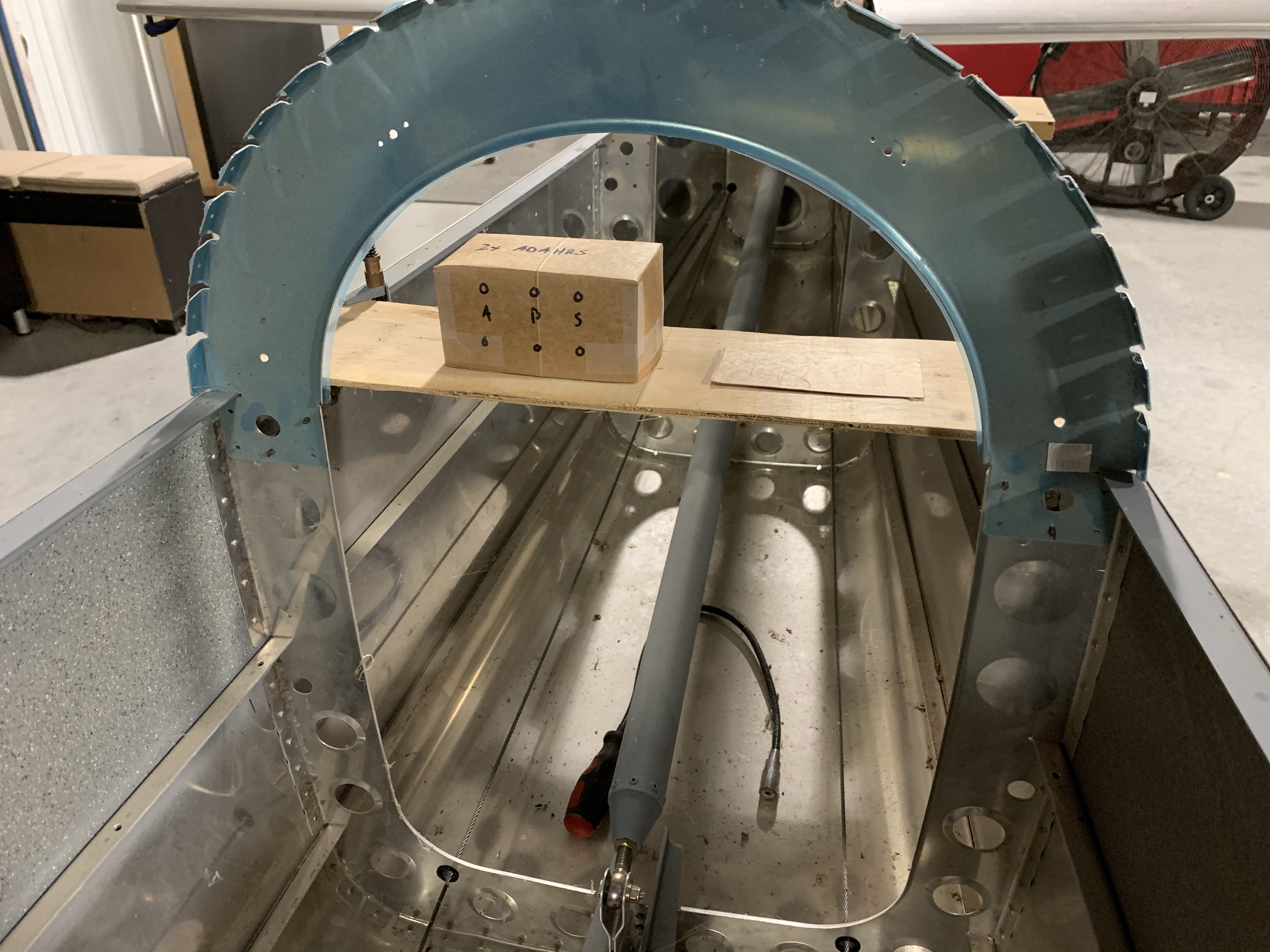 I figure the network feed cable from the forward fuselage will come back along the left side somewhere, then climb up the bulkhead to connect to the network hub. From there, another cable will descend back down the bulkhead to the pitch servo. The two cables to the ADAHRS will just have a short run.

On the front of the ADAHRS units, the pitot/static/AOA lines will connect. That’s the one thing I want to think about before I commit to this – what will that plumbing look like? Each of those lines will need to be teed somewhere in this area to connect to both units. These lines will also come from forward on the left side of the fuselage, since the pitot/AOA lines will be coming from the left wing. The static line will probably feed from aft – I need to double-check where the static ports will be located.

Next up will be planning the rest of the aft avionics. Somewhere back here will live the com radio, the remote transponder, the ADS-B receiver, and an ELT. I suppose it’s time to go look at other people’s builds to see what they did for mounting those items. A shelf bridging across the lower longerons seems like a decent approach, but it’s a long span and would need to be pretty well stiffened, especially to mount the ELT.