Nothing too exciting tonight. I decided to keep working on pitot stuff, possibly going as far as getting the soft lines routed in the wing and prepositioned. First order of business was to trim the hard lines on the pitot and get them flared for the AN fittings. This sounds fairly simple, but it’s been a long time since I did any flares, and these are kinda critical, since they’re attached to a rather expensive piece of equipment. Put simply, requiring several tries to get these right wasn’t going to fly here, and so I did several practice flares using the pieces of line I’d cut off, and only then went on to doing the real thing.

And here we go, a pitot tube with the fittings in place. They’re not final-torqued or anything, just kind of there for now: 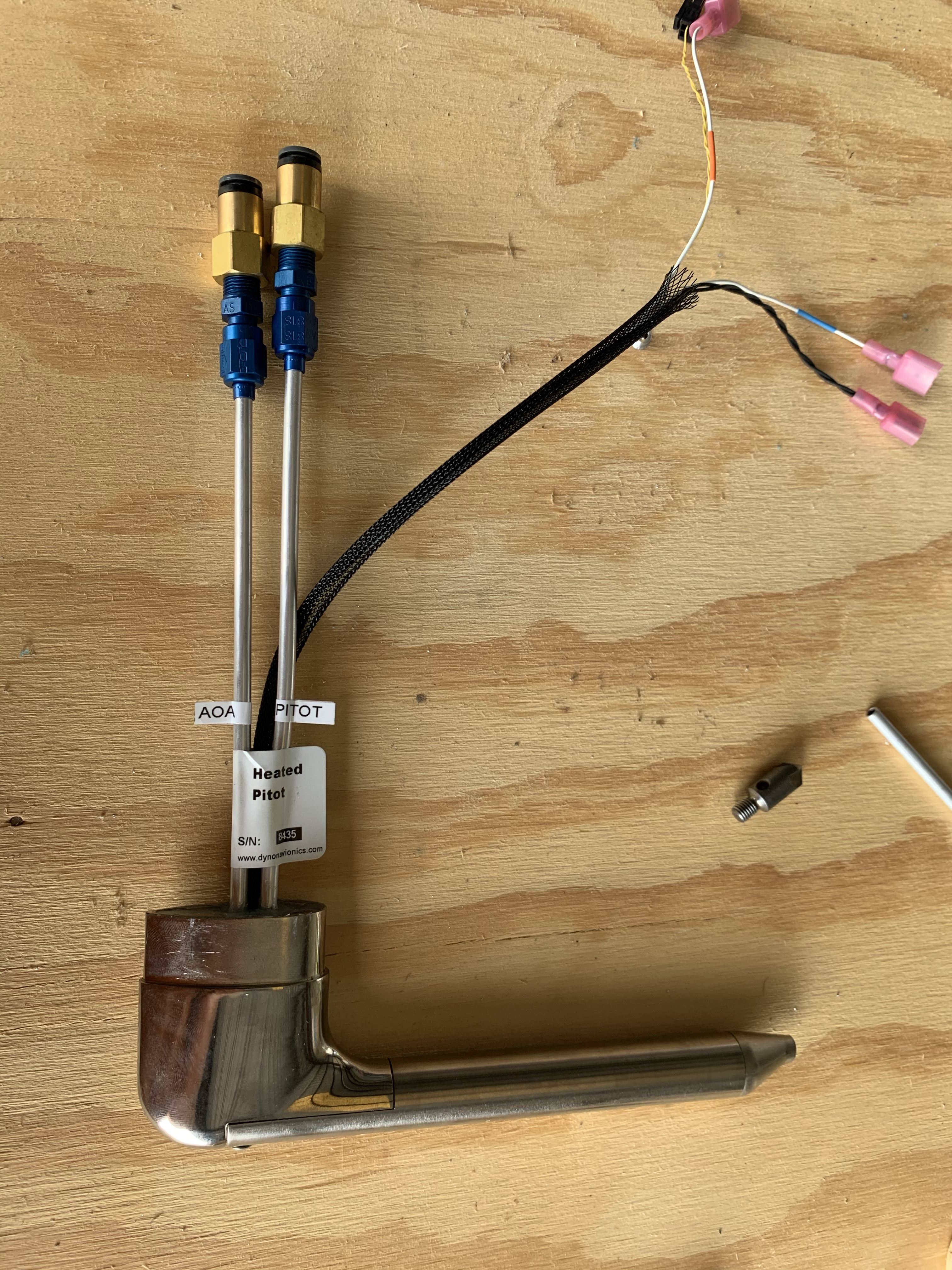 From there, I started thinking about what I’m going to do with the heater control box. The original plan had been to affix this to the outboard side of the bellcrank bay, where it’d be easy to access if necessary. That’s not quite as simple now, since I put the pitot tube one bay further outboard than planned – the wires between the box and the tube aren’t long enough to stretch across two bays. So that leaves me with a couple of choices. First, I could position the box one bay further outboard as well, retaining the ability to use the wires as provided, but making access far more annoying if I ever have to remove or replace it. Second, I could position it in the original spot, and extend the wires somehow.

If I do extend the wires, there’s the question of how I do that. Simply cut them and butt splice in wires, so I can retain the existing terminals? That ends up making maintenance still problematic, since I’d need to route that extended harness in such a way that it’s properly secured, but still removable without a ton of problem. Not quite sure those two goals can be easily reconciled.

Well, maybe I just create an intermediate harness. That does introduce more connectors, and thus more potential sources of failure, but at leas it mitigates maintainability. But using the same terminals on the harness is a problem. The spade connectors for the high-current wires are easy enough, but the two temperature sensor wires use a micro Molex plug, for which I’d need a special crimping tool.

Anyway, I’ll refrain from going through my entire thought process here, but this is pretty much where I’ve landed: I want the control box accessible, which means extending the harness. Since I’m already extending the harness, and since the pitot is now effectively at the halfway point between the bellcrank bay and the wingtip, I’m going to put the box at the wingtip. This way, it’ll be much easier to access for maintenance – I can just remove the wingtip, and have much better access to the harness routing than if I had to work through the access cover.

To extend the harness, I think I’m going to make an intermediate harness, which will be semi-permanently installed in the wing. I’ll use spade terminals for the high-current wires, and for the small temp probe wires, I’ll use a trick from SteinAir, where you put D-sub pins on each wire, and wrap them in heat shrink after connecting, thus making a secure but still detachable connection. These pins will work well for the tiny wire used for the sensor.

Of course, since I don’t really have any wire on hand, I suppose this means I won’t be finishing this harness any time soon. I’m starting to think I should pivot from wing stuff to really getting going on systems, so I can plan out harnesses and put together a big order of wire and other electrical stuff. So I dunno, maybe tomorrow I’ll start making mockups of boxes. It’s a good time to do so, we’ve got a fair amount of cardboard stacked up and awaiting a trip to the recycling center…