The fitting of the mast is primarily done with the wing skin – locating and drilling the rivet holes between the skin and the base, and cutting the hole that the mast actually pokes through. For this, Dynon provides a nice little paper template. The instructions for positioning it, though, I wasn’t a huge fan of, at least for this application. They want you to draw reference lines on the skin and use those to position the template, but the matching lines on the template don’t go to the edge. I guess I could have trimmed the template, but…well, I didn’t.

Instead, since the existing holes between the skin and spar are kind of the starting point for the location, I used those to locate the template, holding a flashlight under the skin so I could spot the holes against the template and get it taped in place: 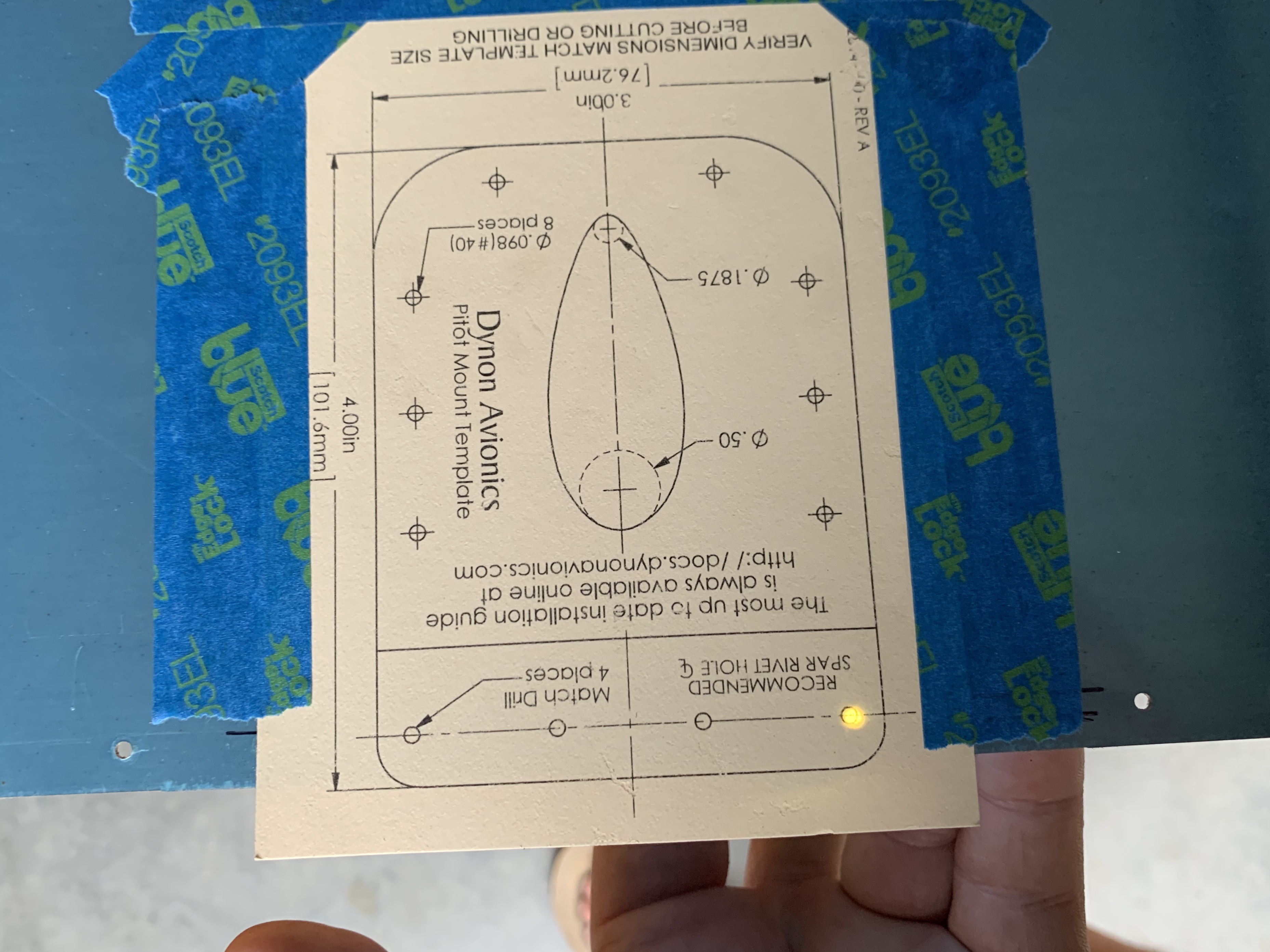 Next, I punched the rivet hole locations, along with the two holes that form the ends of the teardrop-shaped skin cutout, then used a razor to cut out the teardrop portion so I could trace it onto the skin with a sharpie: 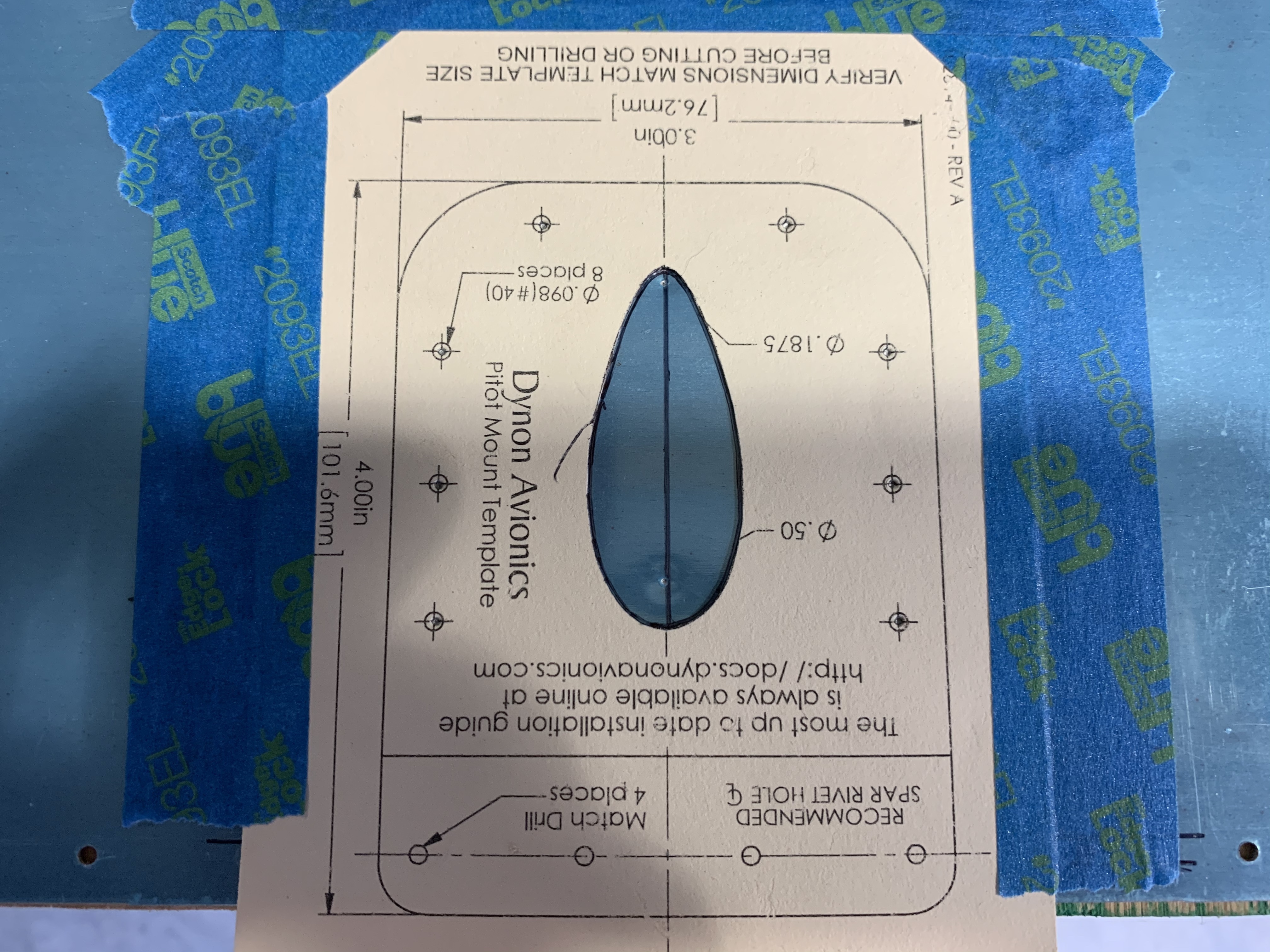 At this point, the template can come off. First, the rivet holes are drilled in the skin: 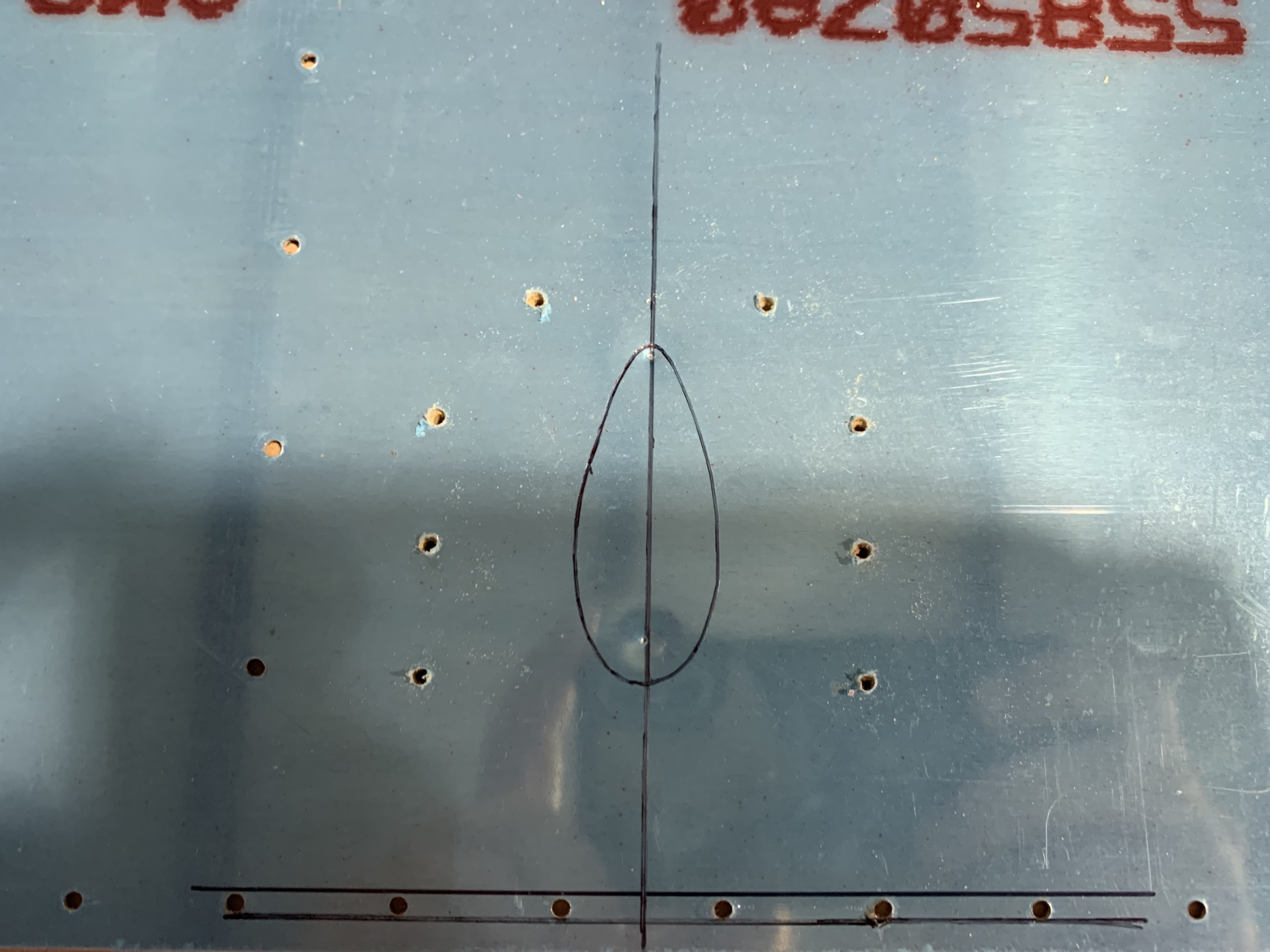 Followed by the two holes to start the cutout: 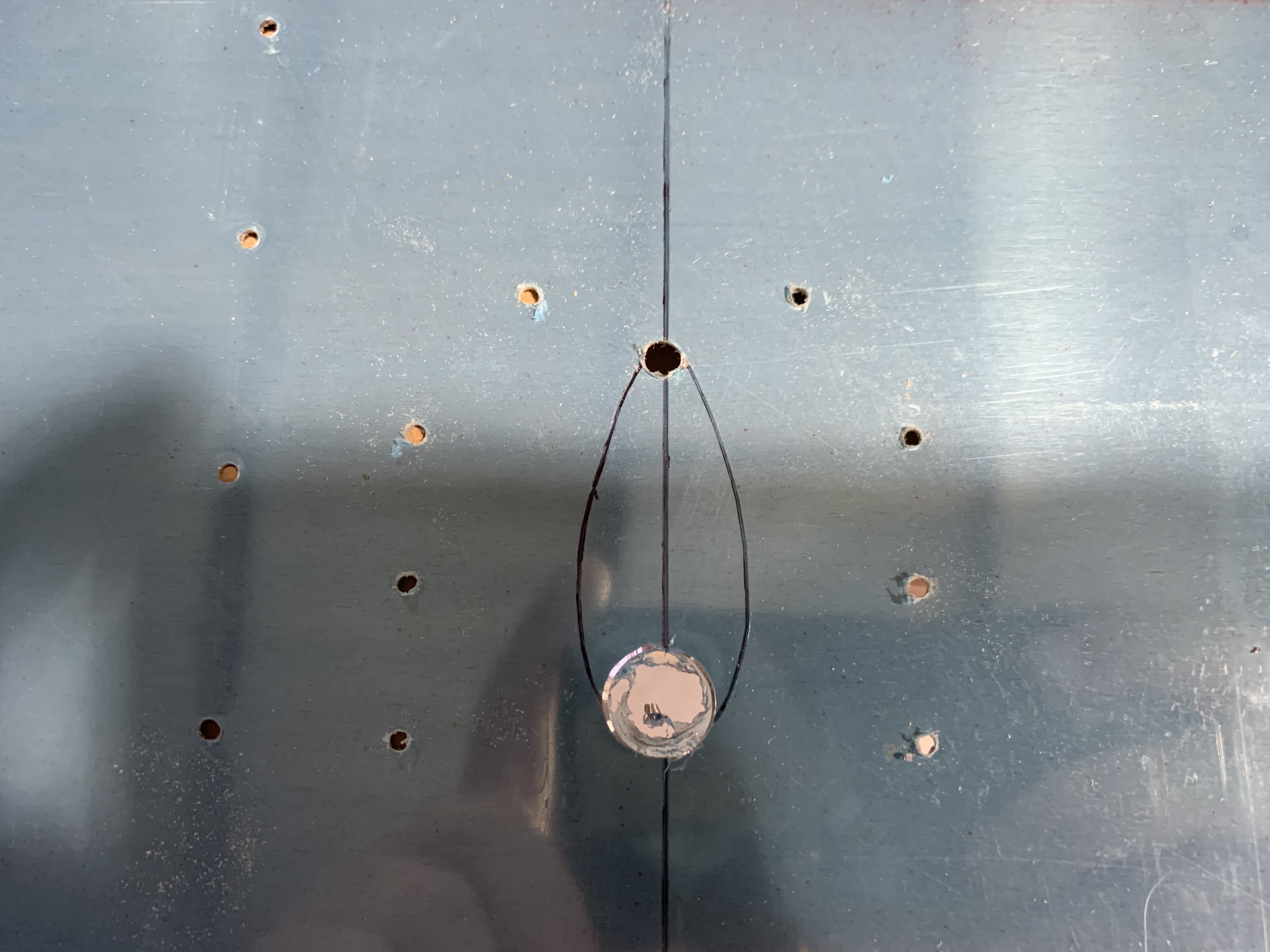 Then it was time for lots of trial and error. I roughed out the cutout with a cutoff wheel in the dremel, then switched to a cutting bit to work out to the marked line, and then spent a lot of time slowly removing material with files until the mast would just slip through the cutout.

Next up was using the skin holes to drill into the mast base itself, and this meant clecoing the skin to the wing and slipping the mount in place. And this is where things got interesting. As soon as I had the skin in place, I saw the absurd mistake I’d made. The pitot was intended to be mounted at the outboard side of the bay just outboard of the bellcrank location. But I actually cut the hole one more bay outboard: 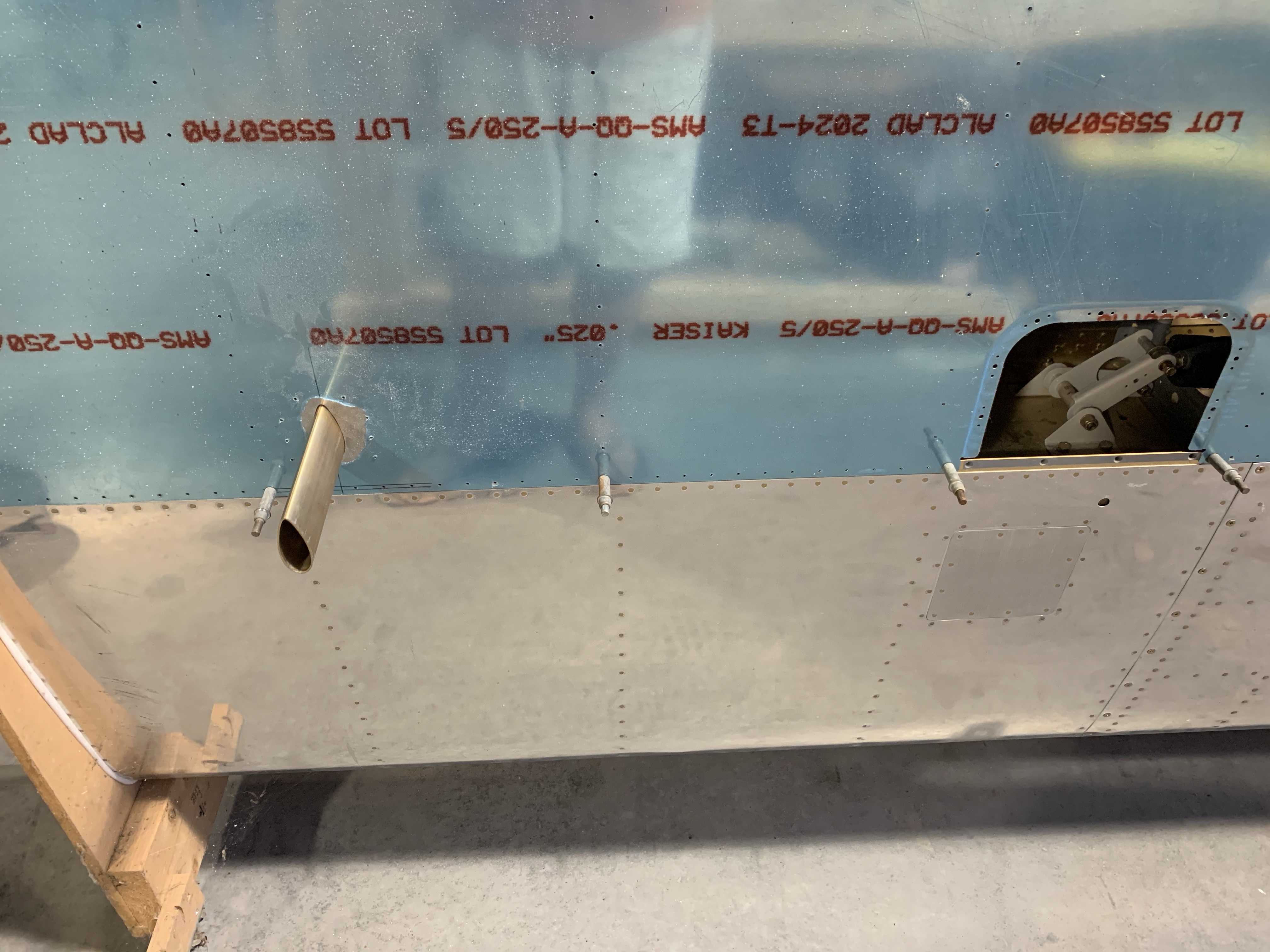 Now, you might think that I’d be pretty annoyed upon discovering this, but honestly, my initial reaction (and still my feeling right now) was amusement. All that time I spent trying to really carefully consider the location, to think through all the packaging, being really sure about it, and then cutting the hole in the wrong place. You can hardly write comedy that’s better than this.

Granted, one reason I can take this so lightly is because I decided to make the pitot attachments serviceable outside the wing. If I’d needed to service (ie connect/disconnect) those inside the wing, this would have been a pretty obnoxious mistake, as it would have been nearly impossible to get to those fittings. Here, though, my service loops for the wiring and lines will just live one bay further outboard. The only real concern is that the heat controller will still need to be mounted in the bellcrank bay, where it’s accessible through the cover. The included wiring between the two won’t be long enough to reach, so I’ll need to extend it. That isn’t a huge deal, though.

Anyway, after shaking my head ruefully a bit, I just kept on going with things. I drilled through the skin holes into the mount base, clecoing as I went, then removed the mount and skin again. The final piece of the puzzle here is a little piece of aluminum angle, which ties the mount base into the adjacent rib. This is needed to secure the mount properly against the air loads it’ll experience in flight. Simply having the mount riveted to the skin isn’t enough – the setup is pretty wobbly.

This part is pretty straightforward – the angle is first aligned with the aft most rivet hole in the base, and while held flush against the rib, that rivet attach hole is drilled. Then I just needed to drill a pair of rivet holes between the angle and the rib. To do this, I needed to ensure the mount was in place as if it were attached to the wing skin, but without the wing skin in place. No problem – I just secured a piece of angle across the ribs, then clamped the mount base to it. I drilled pilot holes in the small angle piece on the drill press, then used those as a guide to drill through the rib.

Here’s the final product, obviously seen without the wing skin: 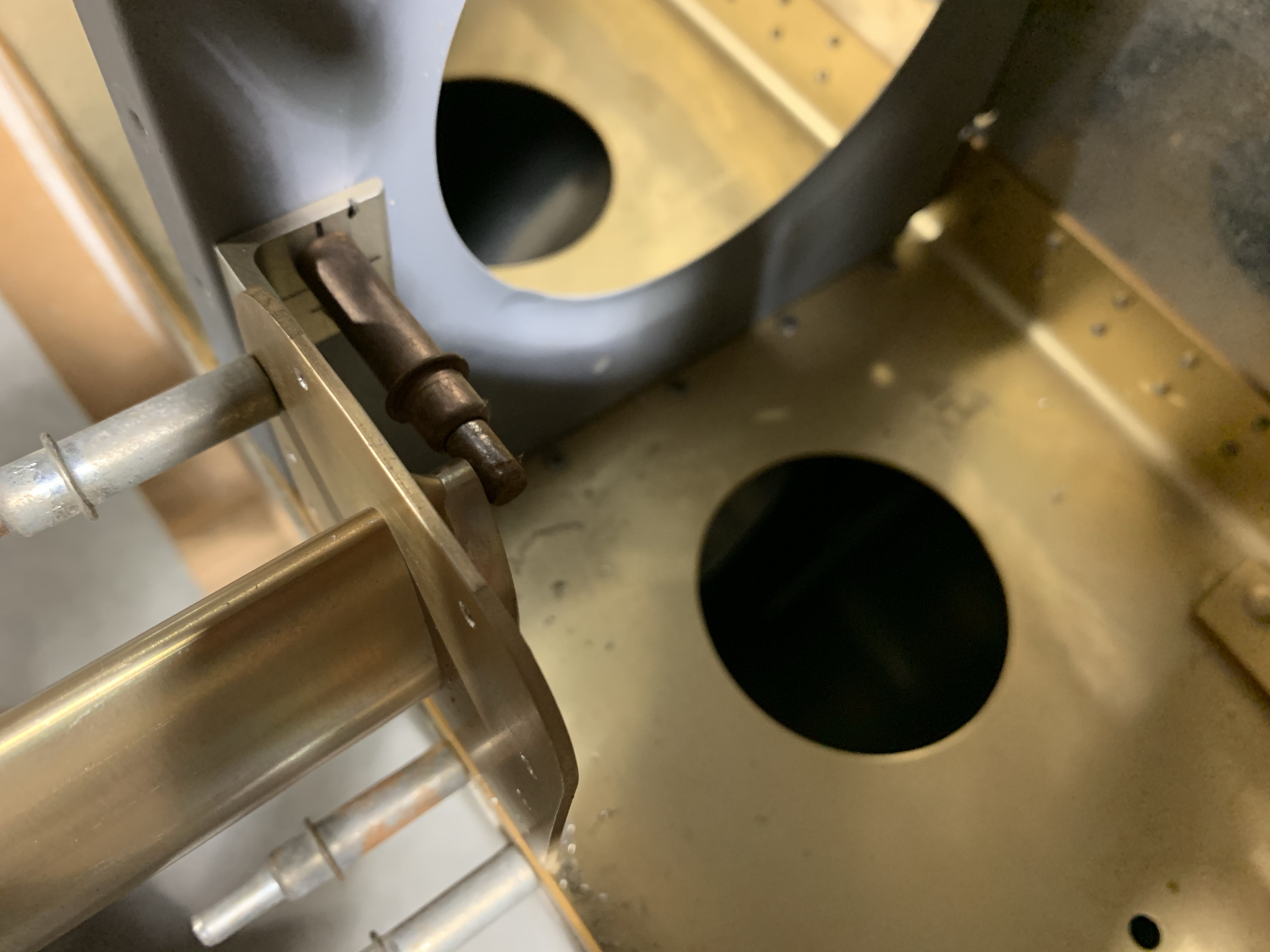 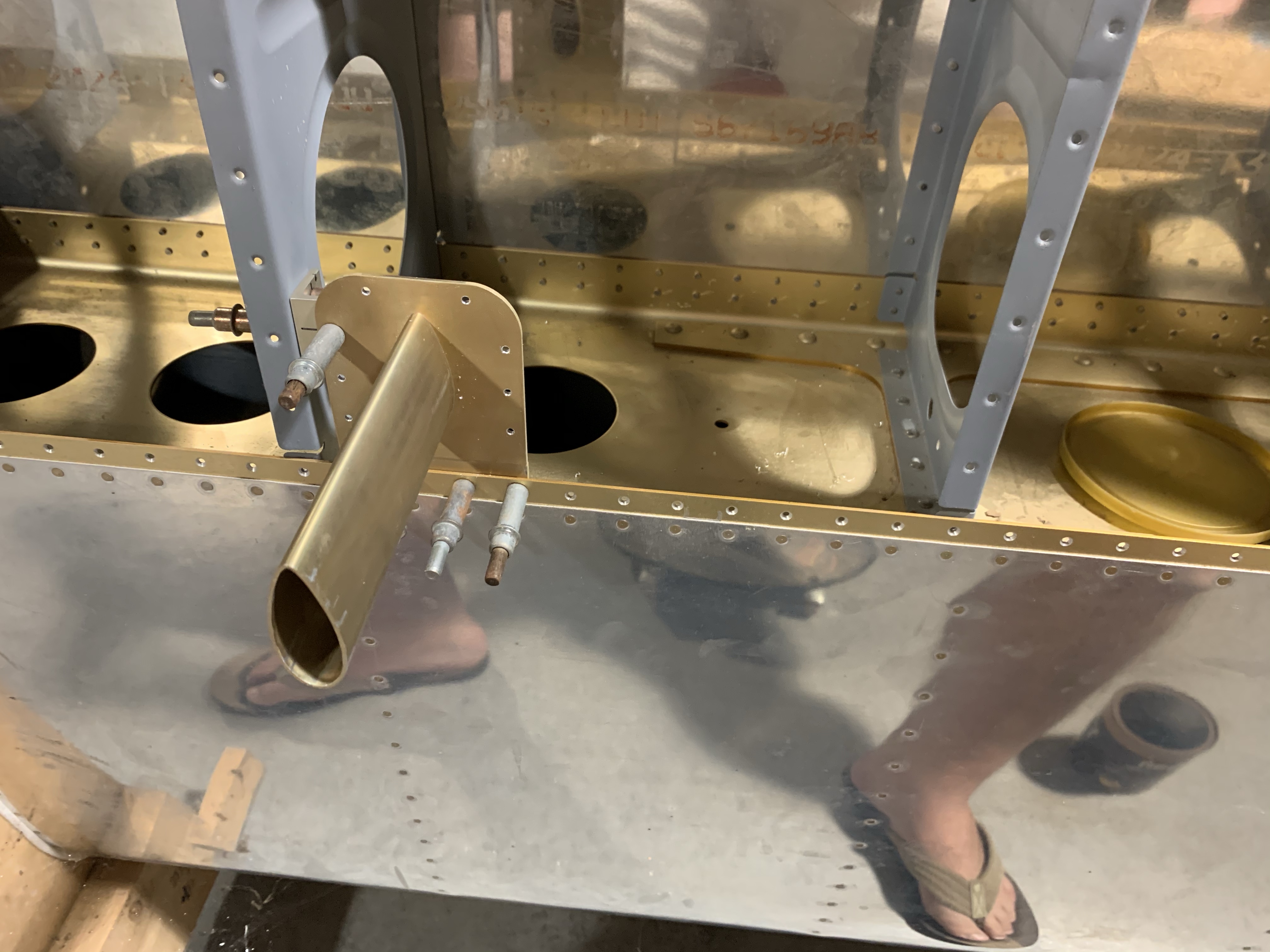 This just leaves working out the heat controller location before I can pretty well call the pitot stuff done for now. Which I suppose means I’ll be moving on to performing the service bulletin on the aileron hinge brackets. And then maybe starting to make cardboard mockups of avionics and stuff so I can start planning wiring harnesses.