As alluded to last night, tonight was the time to do some data-gathering about the pitot tube. The first step was to find a container to make a suitably large ice bath. I wanted to be able to keep the pitot tube running and heating for an extended period of time, basically to allow as much time as possible for heat to make its way up the hard lines. Eventually I settled on the removable liner from the crock pot.

Then there was the matter of a fixture to hold the pitot tube. Here inspiration struck; I have a fixture I made eons ago for holding tubing in place in the drill press. It’s just a 2×4 with a pair of 45° cut blocks attached, providing a nice V-shaped pocket for tubing to rest in – and this made it also handy for resting a pitot tube in. I just needed a way to secure the tube in place, and for that I added a piece of scrap lumber over the top, with a couple wood screws to make a clamp of sorts.

Here’s the finished setup, ice bath and all: 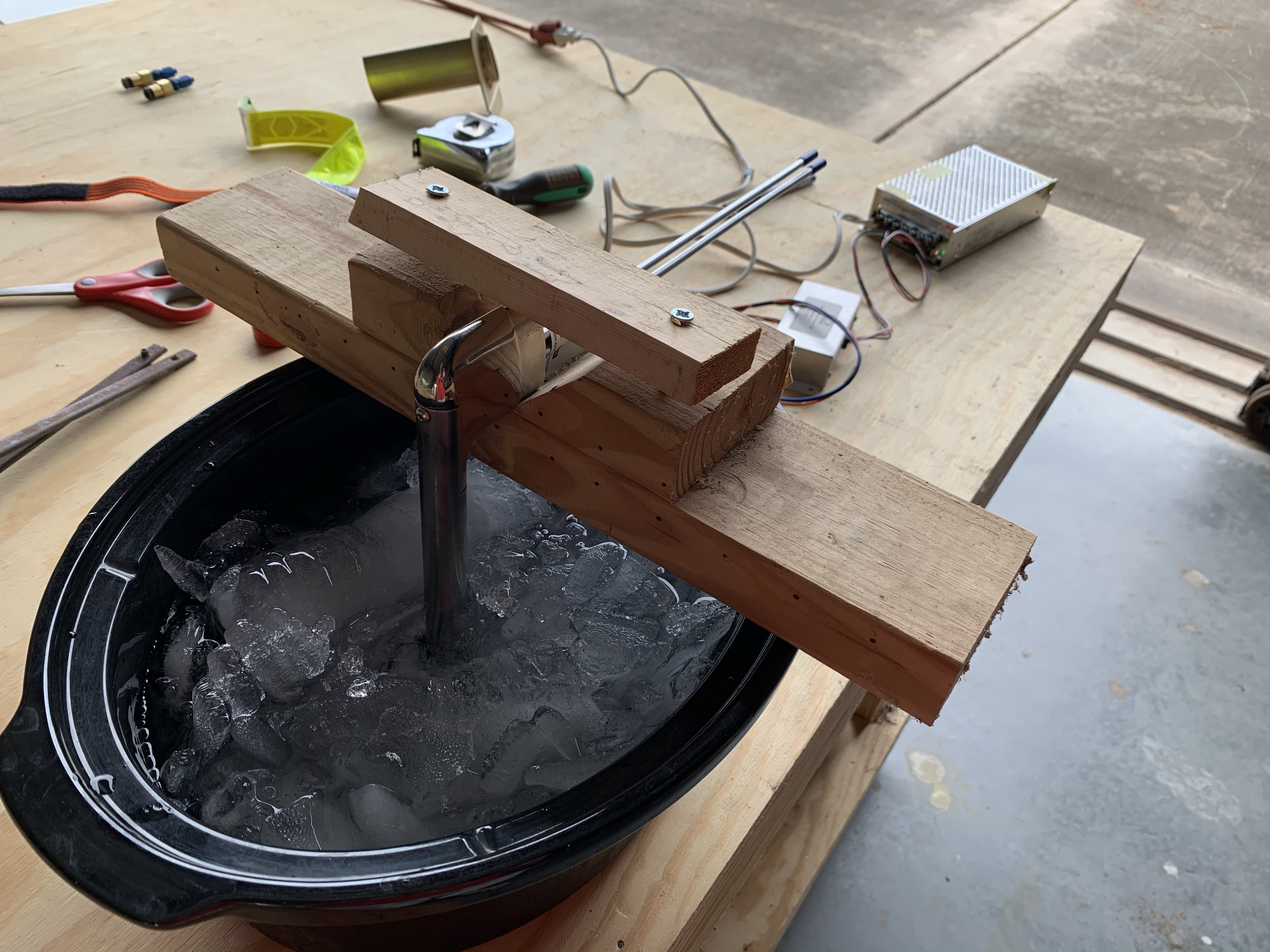 After applying power to the pitot heater box, I left this setup to run for about an hour, which ought to be plenty of time to get good heat soak. Then I measured the temperature of the hard line at 1” intervals, using an instant-read kitchen thermometer.

Now, something to consider here is whether or not I was testing the worst-case scenario here. I believe it does, since keeping the tip of the tube in an ice bath should cause the heater to run at its maximum duty cycle, as opposed to running it in ambient air, where the heater won’t need to do as much work. There is, however, the slight question of whether the ice bath would help to cool stuff upstream from the mast. One could probably have a lengthy debate about how well either of these scenarios resemble real life, but honestly, I’m not looking for real life…I want the worst-case scenario, to poke at an upper limit for heating of those hard lines.

Anyway, the end result of this is that I ran two tests: first, the ice-bath test, then a second one with the tube in the warm ambient air. The results were about as I expected, with the ice-bath test heating the hard lines more. But even in that case, they didn’t get very hot at all, barely north of 100°F even just a few inches from the pitot unit: 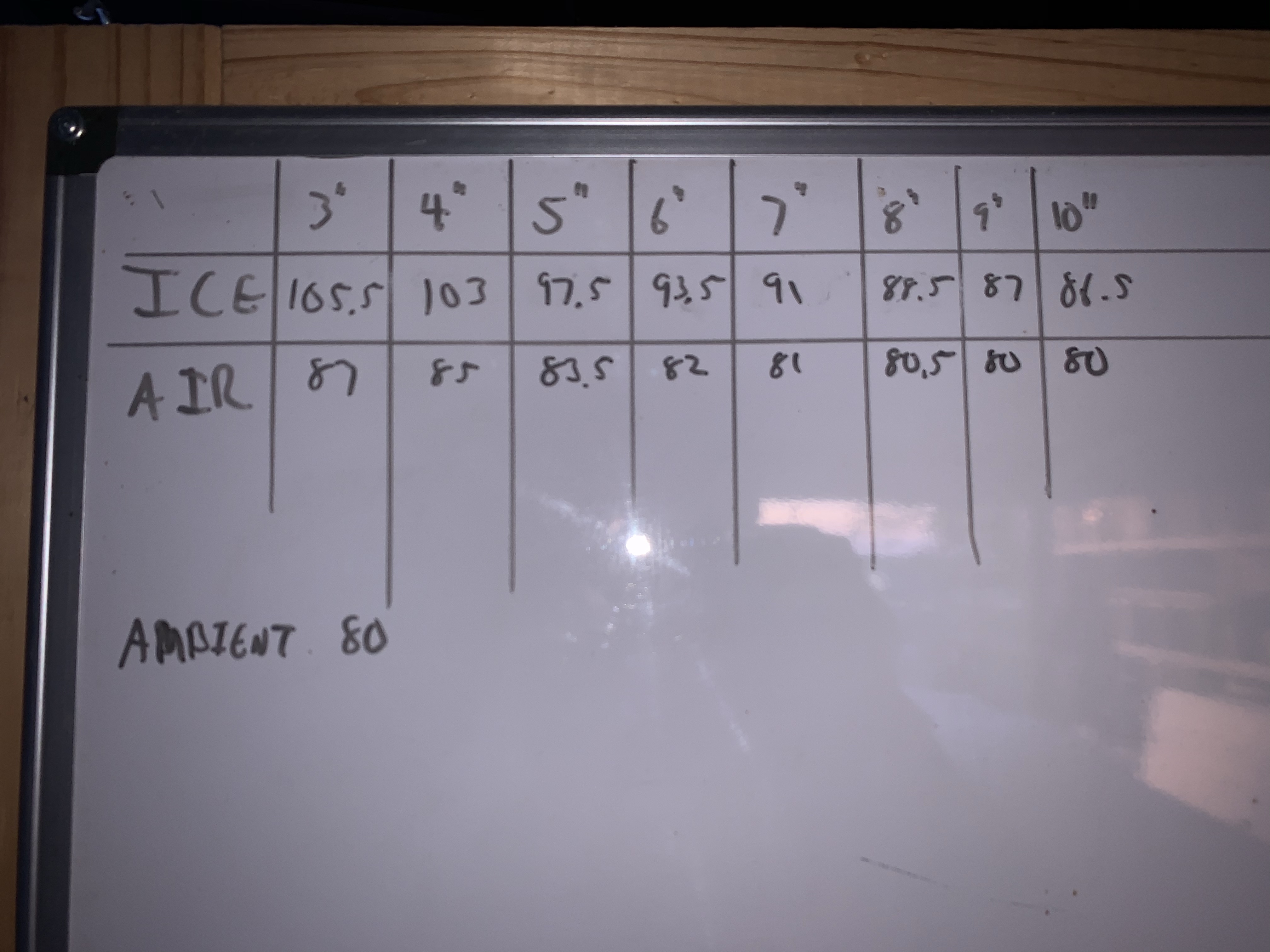 I haven’t had any luck finding a heat rating for the nylon tubing, but seeing as how 105° isn’t even outside the realm of possibility for a really hot summer day here in Houston, I don’t think it’s worth worrying about. Also, 5” is about as short as I’d possibly cut these lines, since that’s the length of the mast.

Long story short, I think I’m perfectly fine to shorten the hard lines and position the fittings inside the mast. This means I don’t have to worry about a carefully-crafted bend in the hard lines, or needing access to the transition fittings inside the wing for service. I can just provide enough slack in the nylon lines to pull the pitot out of the mast and disconnect the fittings out in the open.

That just brings us back to picking a spot. I really wanted to make this work at the inboard spot, but I just don’t like the interaction between even the soft lines and the aileron push tube. I know it’s been done, and I’m sure even if there is light contact between the push tube and the lines, it’ll be fine, but…again, I just don’t like it. I went so far tonight as to feed one of the lines out to mid-span to get an idea of what the packaging would look like, which reinforced that I’d need some tight bends to avoid the push tube.

So it looks like it’ll be outboard. I intend to secure the mount one bay outboard of the bellcrank/tiedown location. This should be far enough away to minimize potential interference from tiedowns, and still reasonably accessible from the access cover at the bellcrank.

Here’s a look at the packaging in the bay with one of the two tubes. The tubing will be routed through existing holes in the ribs, albeit protected with snap bushings in the final product. Not shown here is extra material for a service loop in this bay – I’m not sure if I’ll put that here or elsewhere. 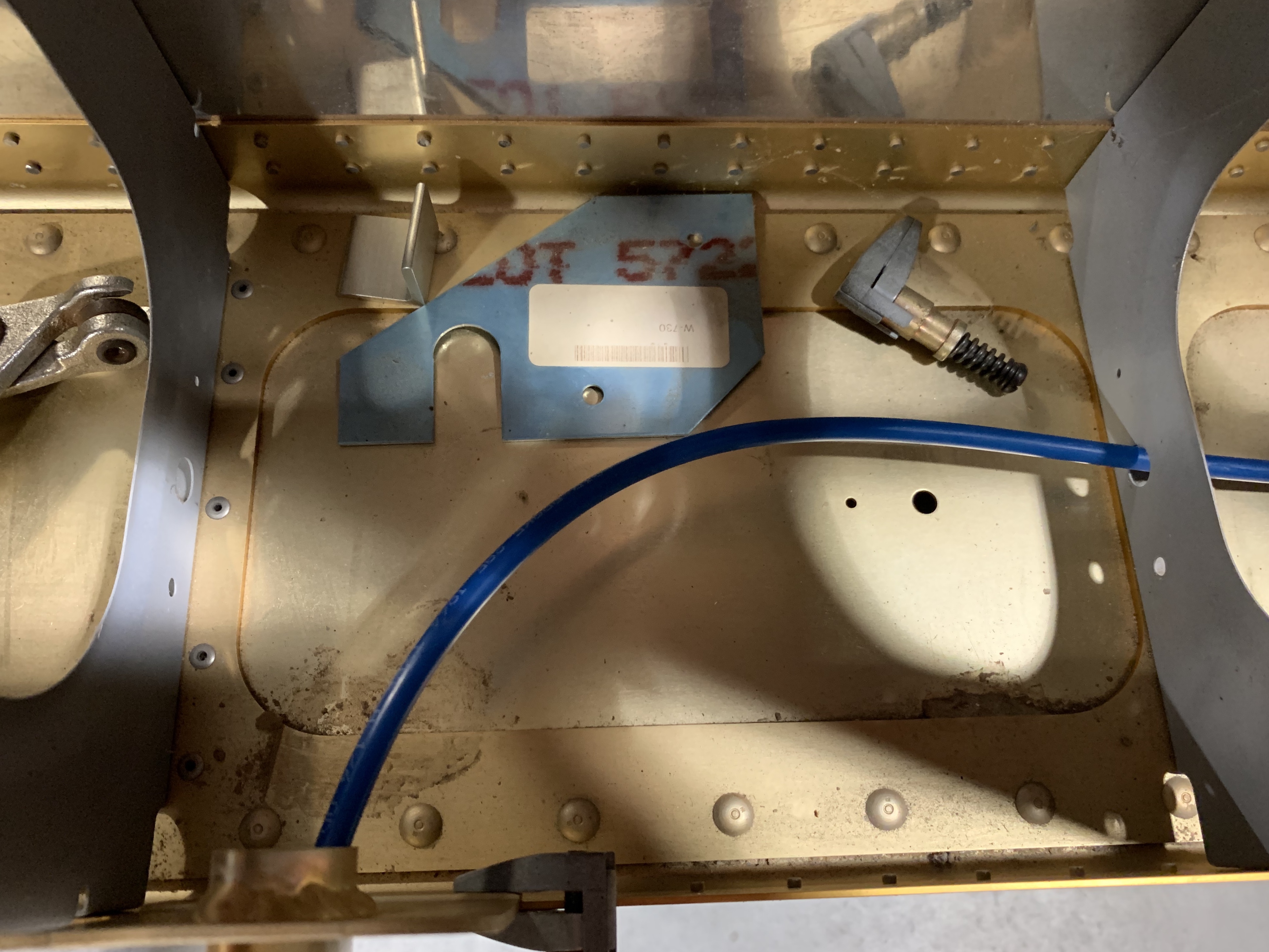 Then we move one bay inboard to where the aileron bellcrank lives. I’ll want some additional hardware here to ensure the tubes are carefully routed between the bellcrank and the spar, just to absolutely ensure they never interfere with each other. 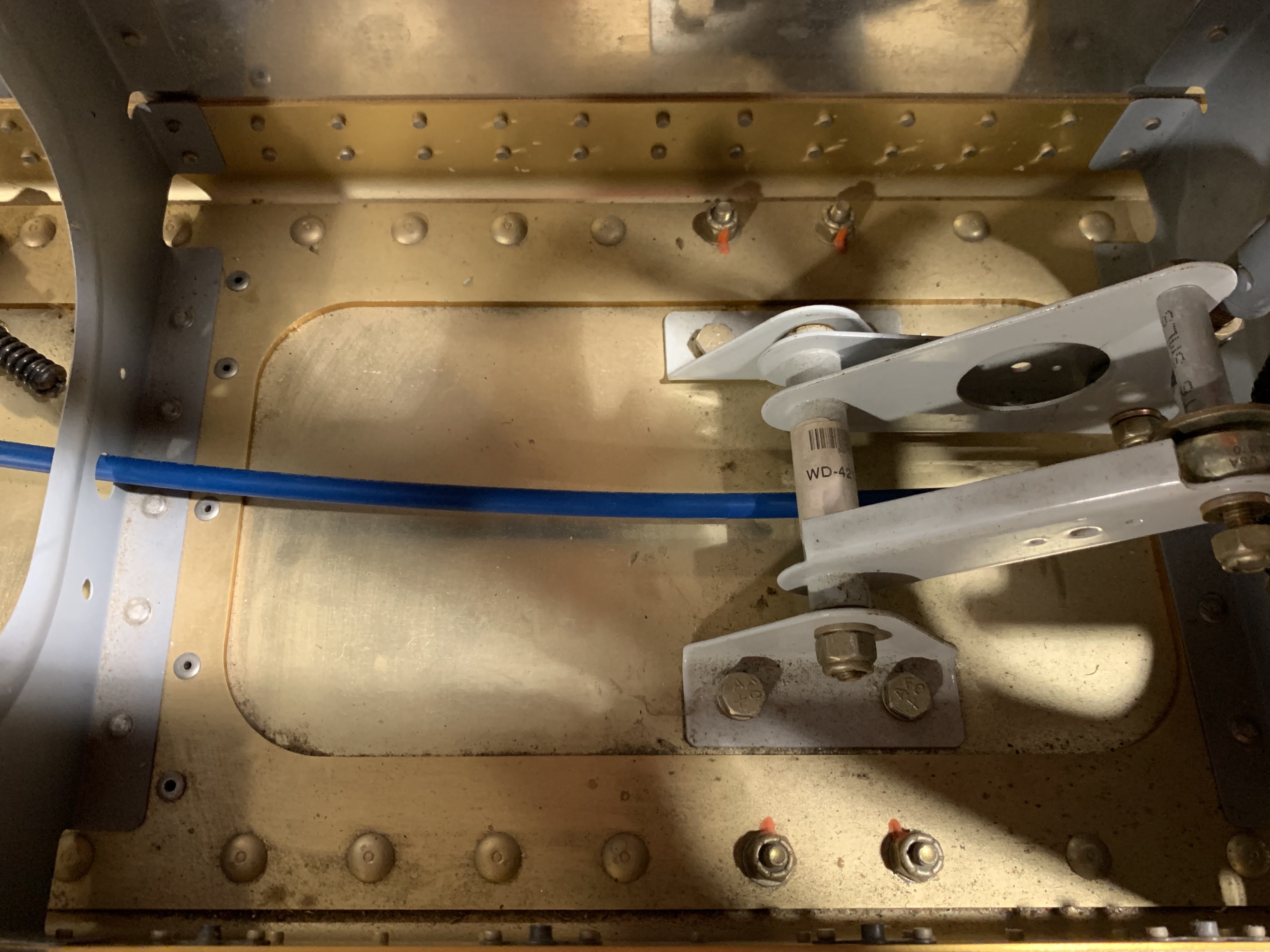 So at this point, I think this is finally settled, and I can now move on to the somewhat scarier – but less ambivalent – task of fitting the mount and cutting the hole in the wing skin.