Title mostly sums up tonight, the tweaks all around to accommodate the new three-lever throttle quadrant are now done. I ended up managing to do it without having to do any major rework on the bulkhead passthrough holes at all, which was nice.

Last time out I’d verified that using clevises on both ends of the linkage would work, but would require some work on the passthrough hole in the bulkhead near the rear throttle. I’d also come up with the idea of maybe moving the rear throttle outboard a bit, and it was that idea that I tried out tonight.

Back when I decided to use rod ends on the linkage, I had to modify the quadrants a bit – since the rod ends put the linkage further outboard, I had to add spacers to move the outboard framework out to provide adequate clearance. But If I’m using clevises, I don’t need that space any more, and I can repurpose those spacers to move the quadrant itself outboard in the frame. I just had to disassemble the works and move the spacers from the outboard side of the quadrant to the inboard side. Then came the moment of truth – would the rear quadrant still line up OK with the hole in the armrest? Well, mostly. If I look straight down and kind of squint, I can make out a bit of a gap at the inboard edge, but it’ll never be noticeable outside of that.

Good news, but now how does the linkage fit? Turns out…great! There was a bit of light rubbing at the aft center section bulkhead, but just a little bit of filing took care of that issue.

The aft center section bulkhead is a bit tight but still clear. This is where I can’t expand the hole any more without running into edge distance issues with the rivet holes for the caps: 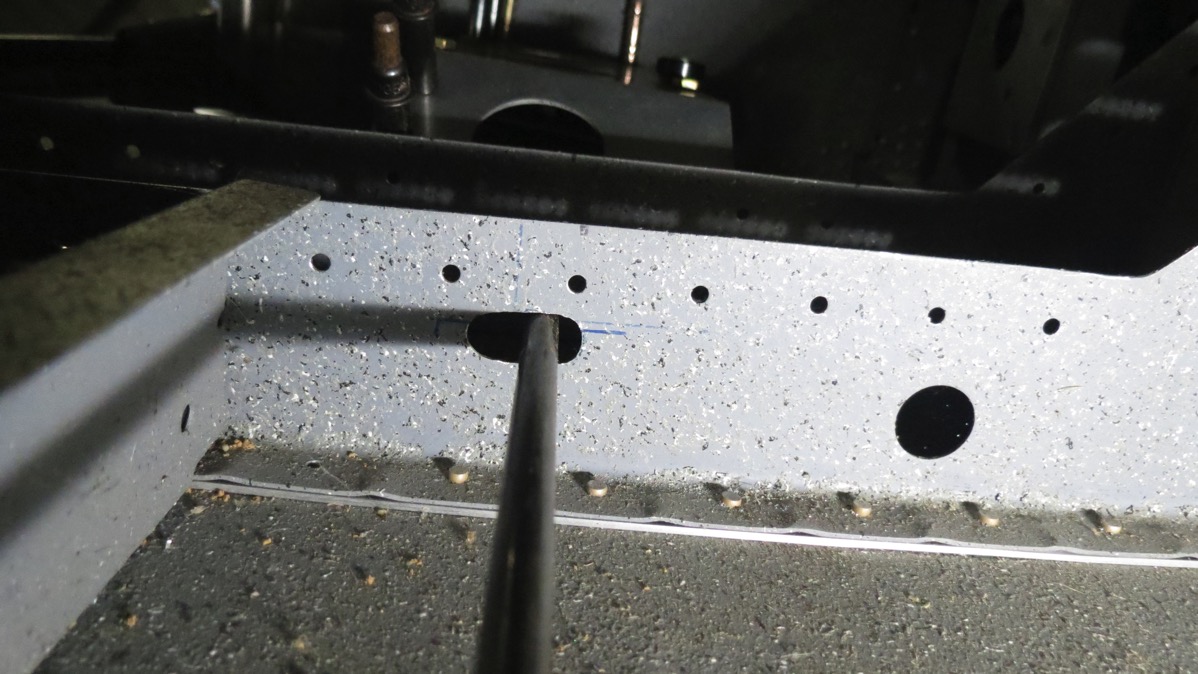 The rear bulkhead is A-ok, no concerns here: 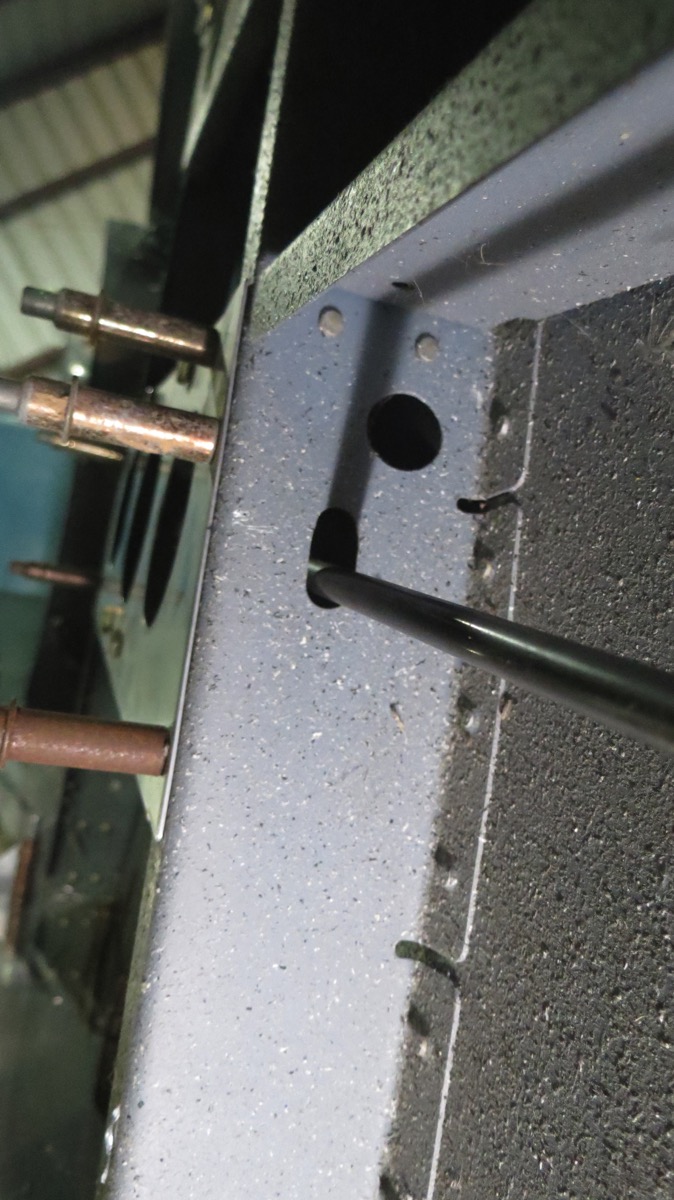 To finish up the night, I removed the stainless bolt shafts I was using for the clevises to attach to, and then reinstalled them with red Loctite. They won’t be going anywhere.

This mostly wraps up the rabbit hole I went down before riveting some nutplates to the forward quadrant cover and moving on to other things. There’s just one thing I need to decide if I want to deal with, and that’s this gap between the cover and the quadrant itself: 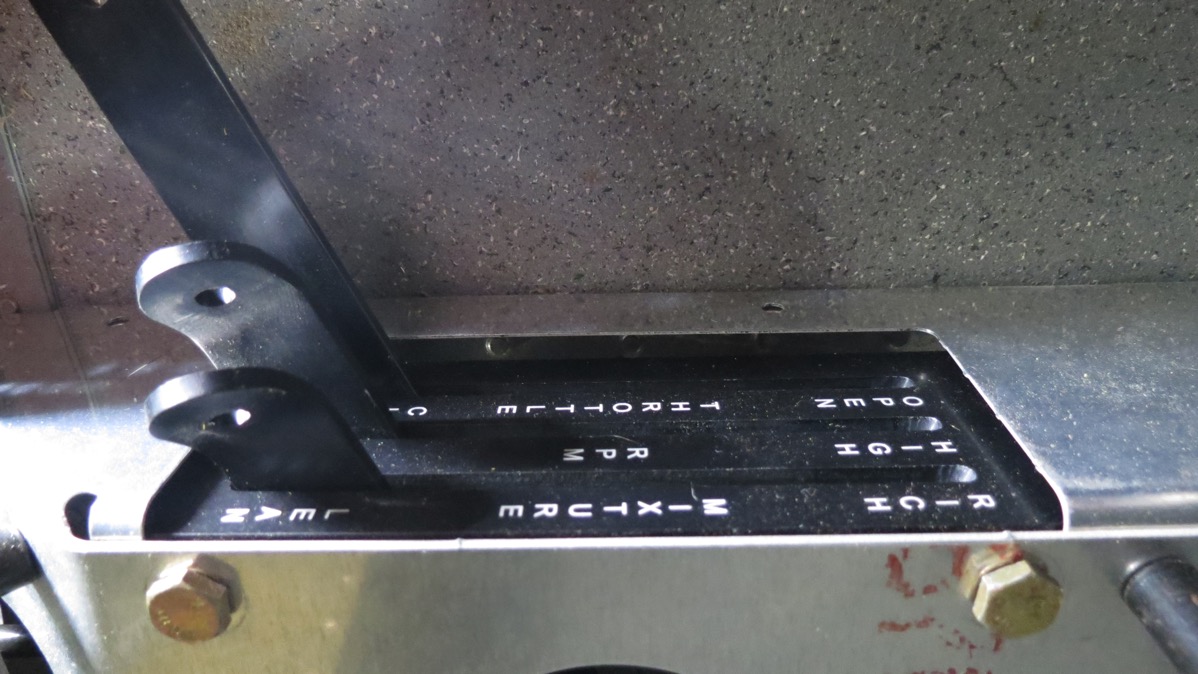 The top of the quadrant sits flush with the top of the mount bracket (bottom foreground), but the cover plate necessarily has a radius to the bend, which results in that fair bit of gap between the two pieces. With the two-lever quadrant, I made my own cover that fit flush, with the three-lever the factory piece fits, and I’m not sure I want to make my own cover again. So I have to decide if I can just let the gap be or not. I’m considering making a filler piece to go in here; I can probably get some thick aluminum material that will fill the gap, cut it to fit around the quadrant, and just rivet it to the over plate. I’ll probably see what the VAF folks have to say about this, I can’t possibly be the first person to deal with this (since I’m using a factory piece and a super common quadrant).

In other news, at the local RV lunch today I got to talking with another builder about the service bulletin modifications to the horizontal stabilizer. This bulletin involves inspecting for cracks at the forward spar of the h-stab, and if they’re found, adding reinforcements to the area. Doing this is fairly invasive, and would mean really messing up the paint on a finished plane, so I’m strongly considering just going ahead and doing the reinforcements now, when there’s no paint to ruin. Not doing it now would basically be gambling that my plane would never have cracking. It seems to me that there’s no better time to do this work than now, so I think I’ll order the SB parts kit from Van’s soon. After all, before too much longer I’ll be mounting that horizontal stab to the fuselage…