Some more playing with the throttle linkage tonight. Last time I was thinking that replacing the rod end bearing on the forward end of the linkage with a clevis might solve my alignment issues without needing any bulkhead passthrough hole tweaking. Well, I got to thinking about that even more and decided that what would really be nice would be being able to use a clevis on both ends. It’d be way easier to hook up than the rod ends, and in fact the clevises were my original plan when I first played with this stuff.

So tonight I wanted to do some trial fitting with the clevises to see if it looked like my idea would work out. But first there was the issue of needing some threaded rod to connect the clevises to the linkage (both have female threads). Well, I stopped by the hardware store, and they didn’t have any 10-32 threaded rod. So instead I just bought some 10-32 stainless bolts and cut the heads off them. These might or might not end up being the final pieces here, but they at least let me get things mocked up.

One problem with this is that the clevises are significantly longer than the rod ends, so even with them threaded down as far as they’d go, the linkage is way too long. But it was just short enough that I could get it lined up with the forward throttle full forward and the rear one full aft. All I really cared about was seeing how the linkage lined up with the holes horizontally. And it turned out pretty nicely – on the forward end, the linkage sits almost dead center in the center section bulkhead holes. This makes me happy because I’d rather not remove any more material there. The other passthrough point is on one of the bulkheads on the rear side skin – here, as I kind of expected, the linkage rubs the inboard side of the hole, so it’ll need to be widened a bit. But there’s plenty of room to widen it. Another option might be to simply move the rear throttle outboard a bit – I think I can do this fairly easily, the only question is whether the hole cut in the rear armrest will still work or not. I’ll have to poke at that another night.

To finish out tonight I trimmed some material off the linkage tube and then got the cut end tapped for the threaded rod. That’s as far as I got tonight though, next time will be even more test fitting.

In other news, I’ve been continuing to work on systems stuff on my morning and evening bus rides. Right now I’m trying to really nail down the general architecture, which has meant lots and lots of reading, including the VP-X install manual, Dynon Skyview literature, and so on. So far I’ve got a rough idea of the electrical backbone in place, the main thing I’m trying to think through is failure scenarios. There’s a whole wide range of stuff that’s covered by “redundancy,” so I have to parse a lot before I can make a decision about what’s right for me.

But I have been having fun drawing rudimentary schematics in draw.io. 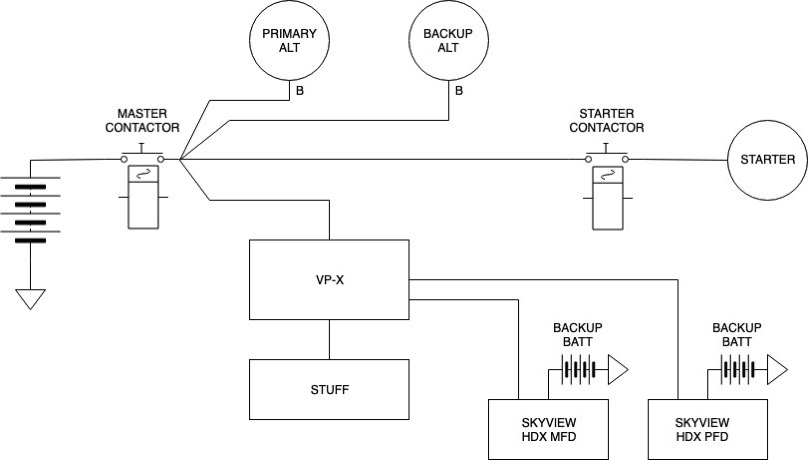