Once again it’s been a while since I’ve been here, and yeah, it’s been a while since any real work got done on this project. I will defense myself slightly by saying that I have been doing some stuff, just not real luggable work. Josie and I made it to Oshkosh this year, where I did a lot of prodding various vendors and firming up plans for systems. And over the past few months, I’ve been spending some of my morning bus rides reading up on systems stuff (I read Bob Nuckolls’ book cover-to-cover) and beginning to architect my electrical system. On that latter point, I have a sizable spreadsheet going which covers all the components I expect to install, their pinouts, and how everything ties together.

But still…there hasn’t been anything that actually happened out in the shop. Today, though, I finally got to cleaning up some messes I’d left from other projects, and suddenly I got the itch to do something. So I decided it was time to finish up these light boards. Way back when I worked on these last, I found I was short a couple of green LEDs. A quick email to Paul settled that issue, and after the long wait for mail from Australia, I had my two LEDs.

So to get back in the groove of things tonight, first I had to solder those last two LEDs into place. Then I just had to solder the power resistors and connectors to the right-side boards, and things were done. Nothing to it really.

But then I wanted to go a step further and test out the entire setup. I had, in fact, acquired a breadboard a while back for situations like this one. So I set about tying the light boards together (each wingtip has its two boards connected via a ribbon cable) and then hooking everything up to the control board. Then I got the control board tied to the breadboard, where I could attach jumpers to simulate switched inputs on the panel. That let me turn the position, strobe, and wig-wag functions on and off easily. Oh, and I also cut some slots into some scrap wood to actually hold the boards. 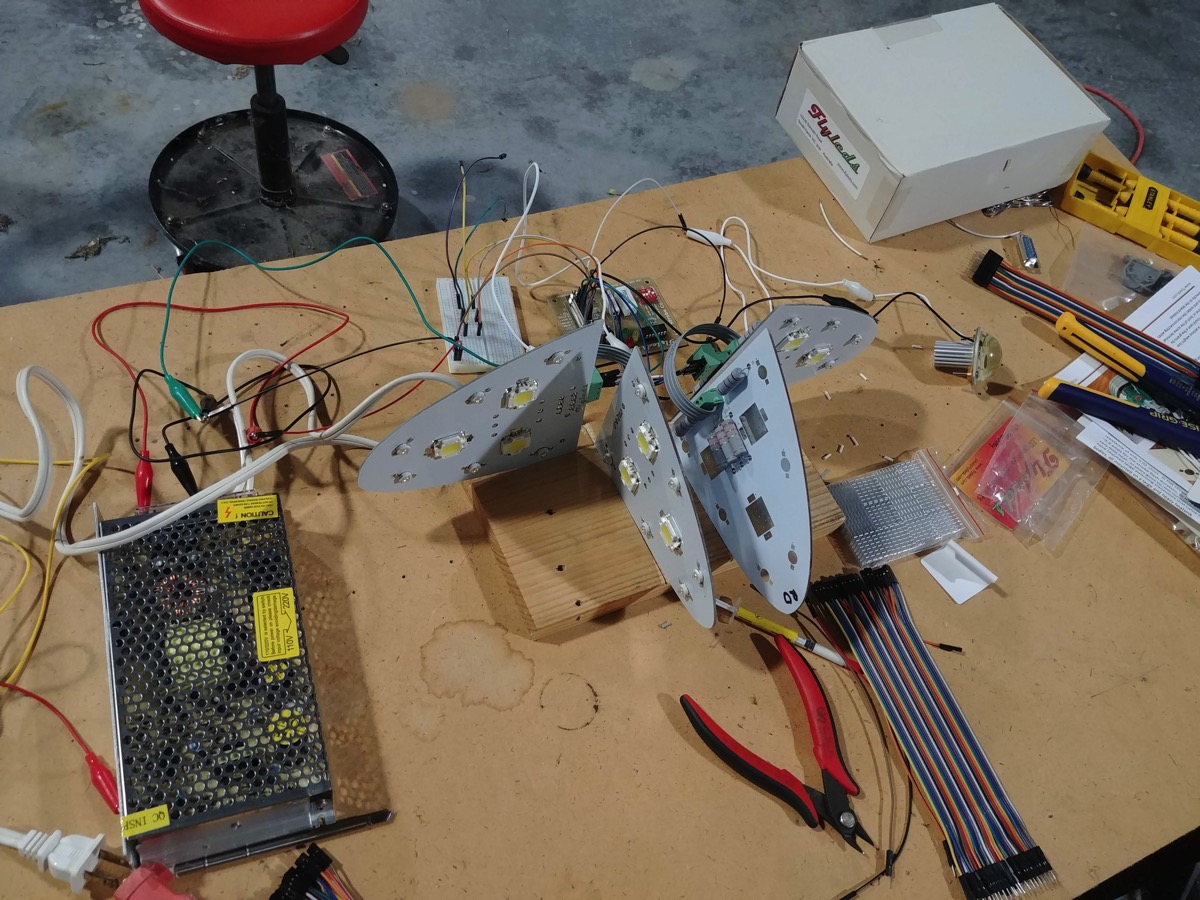 And then, of course, I had to turn off the hangar lights and try everything out. And there had to be video. The challenge was getting useful video – trying to film the lights directly just resulted in the camera being overwhelmed. So I ended up standing behind the boards instead. It’s enough to get the idea across:

Anyway, that’s it for now. Next on my list is cleaning up my two workbenches and rebuilding one of them – I decided a bit ago to replace its top with a larger piece, and essentially set it up as a fixed bench (though still technically movable if needed). I even have a strip light I’m going hang above it for task lighting! Maybe I can finally cut down the big piece of MDF I bought months ago this weekend…