So first off, the good news: The board that didn’t want to work right last night is now fixed. As planned, I took the board to work and tried testing it with the multimeter in the lab, but that didn’t yield any more new information. Slightly defeated, I spent the rest of the day with the thing sitting on my desk, but an eagle-eyed coworker dropped in, asked about the boards, and after looking for a bit pointed out that one of the LEDs looked to be slightly out of place, in such a way as to maybe cause a short circuit. That idea fit with the evidence I’d seen – no lights, resistors getting super hot under power, and I’d already observed oddly low resistance across that particular LED.

So when I got home tonight, I repositioned that LED a bit. Put power to the board and…well, one string of red LEDs lit up, but not the other. Slight progress at least. Some more testing with the multimeter and I identified another LED that seemed to be shorted. It didn’t look like it visually, but I decided to reposition it anyway. And lo and behold, after that they all lit up!

I could go and solder the resistors onto the other wingtip boards, but they won’t be complete until I can get the two missing LEDs from Paul, so I decided to move on to building the controller board. This board has a few bits already soldered – a few surface mount bits better done in a reflow oven – but everything else is left for the builder. Something like 11 resistors, three capacitors, a diode for fun, the IC socket, a DIP switch, and a D connector for hooking everything up down the road. In some ways the soldering here was easier – nothing dramatic was needed to get it done, unlike working with those big strobe LEDs – but all the pins are super close together, so it’s still a bit tense. But after a couple hours I had myself a completed board (sorry, I forgot to take a “before” photo): 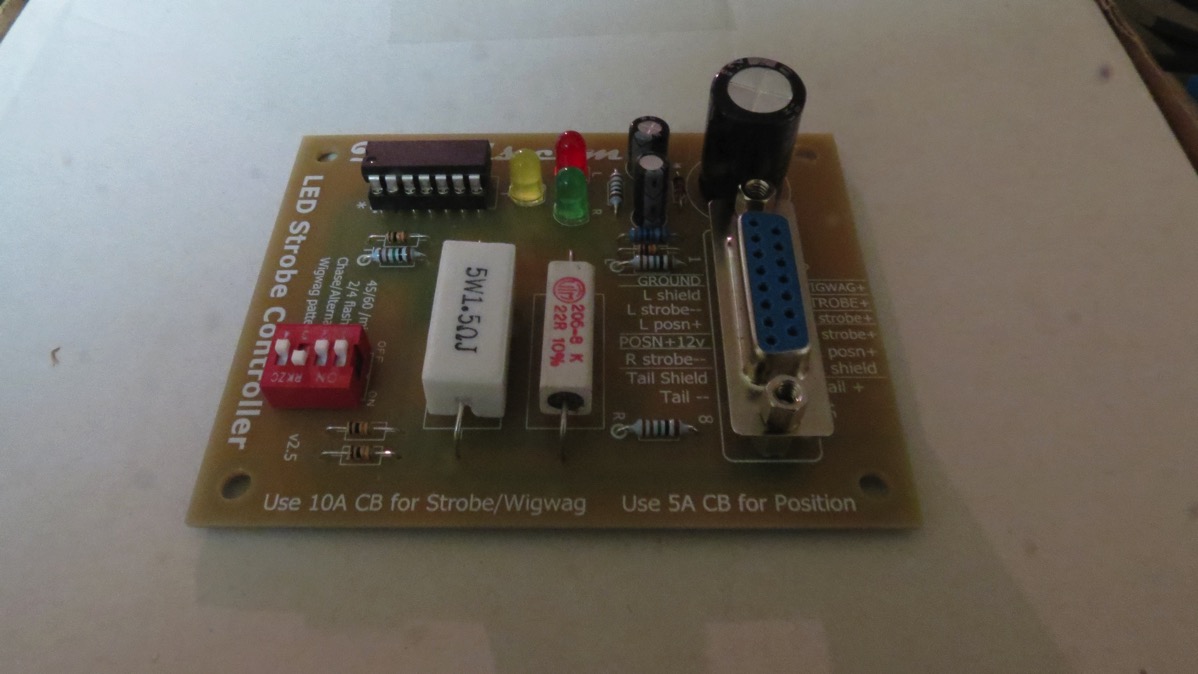 Even better, it actually worked when tested. Test #1 is to just power up the board and observe the little LEDs on it. The red/green ones represent the wingtip strobes and the yellow one the tail strobe. By observing these you’re seeing when the board would be switching on/off the respective lights. This is a good time to tinker with the various settings (flash rate, number of flashes, flash pattern, wigwag pattern). The other fun test is to put the multimeter in continuity mode and probe the power pins for the wingtip strobes. In this way you can hear the multimeter beep in time with the relevant LED flashing on the board. Somewhat underwhelming in a certain sense, but still cool to see/hear it work. It’ll be really fun when I can put all this stuff together into a test rig of some kind (and probably test it out on the ramp at night).

The only problem I have now is that I don’t have any more good inside work to do, and there’s a whole lot of summer left…I do still have the green boards to do, but it’ll likely be a week and a half before I have those missing LEDs in hand…