So, after spending a fair amount of my long weekend alternately catching up on work around the house and being lazy in the air conditioning (since the Houston summer has arrived), today I finally got to work building the FlyLEDs boards. I won’t go into a ton of detail about the procedure; anyone who wants details can simply take a look at the really great documentation that Paul has put together online.

On the advice of said documentation, I bought myself a new fancy soldering iron with an actual temperature control (to take the place of my previous El Cheapo Walmart Special or whatever it was). Took a few minutes to get that put together and up and running, but before long I had myself a little workstation going on the kitchen counter: 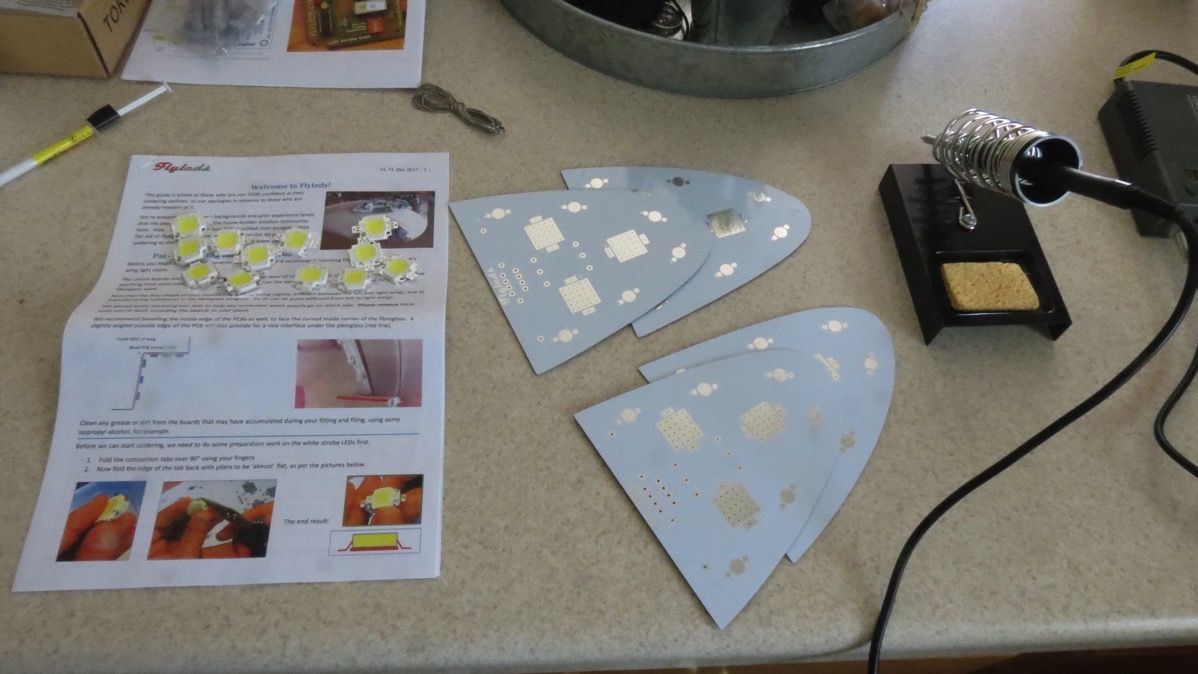 First up were the big white LEDs for the strobes. The docs specifically call out that the LEDs and boards tend to soak up a lot of heat, and…man, I found that to be an understatement. The first joint I soldered turned out nice, and I was quite proud of myself. The second one…I could not for the life of me get it up to temperature. I tried different iron positions, double-checked the soldering iron temperature, over and over again, but i could never get the solder to melt anywhere but in actual contact with the tip of the iron. It’d never actually flow into the joint.

I began to grow suspicious of the iron tip I was using, just a regular old pointed tip. Some reading online seemed to lend credence to this maybe being a problem, so on a whim I switched to the other tip that came with the iron, an angled knife tip. This tip was still smaller than the length of the joint I was soldering, so I reasoned that maybe just getting more contact for heat transfer would help.

Boy, was I right about that. Using the knife tip, the joint would get hot enough to flow solder within 5-10 seconds, no problem. After spending probably 20 minutes trying to solder that one stupid joint with the other tip, I knocked out all 22 remaining joints in probably 15.

The small red/green LEDs for the nav lights were a bit more difficult. One nice thing about the white LEDs was that they were large and easy to maneuver. The nav ones are much, much smaller. And since the terminals are also, by extension, smaller, I had to switch back to the original iron tip. This time I made sure it was fully seated, on the off chance that there was an intermittent connection the first time around or something.

This time I had no problems with the soldering; the red lights were done in no time, and I moved on to the green ones, only to find…I was short two LEDs. Well that’s a little bit annoying. So I decided to take a break there and inventory all the other stuff. Everything (else) for the wing boards was there, that was an easy inventory. The control board is a bit more complicated, but there were no missing parts there either. OK good…I’ll just go ahead and solder all the green lights I have, then shoot Paul an email later to see about getting the missing pieces.

Anyway, here are the left (red) boards with all the LEDs in place: 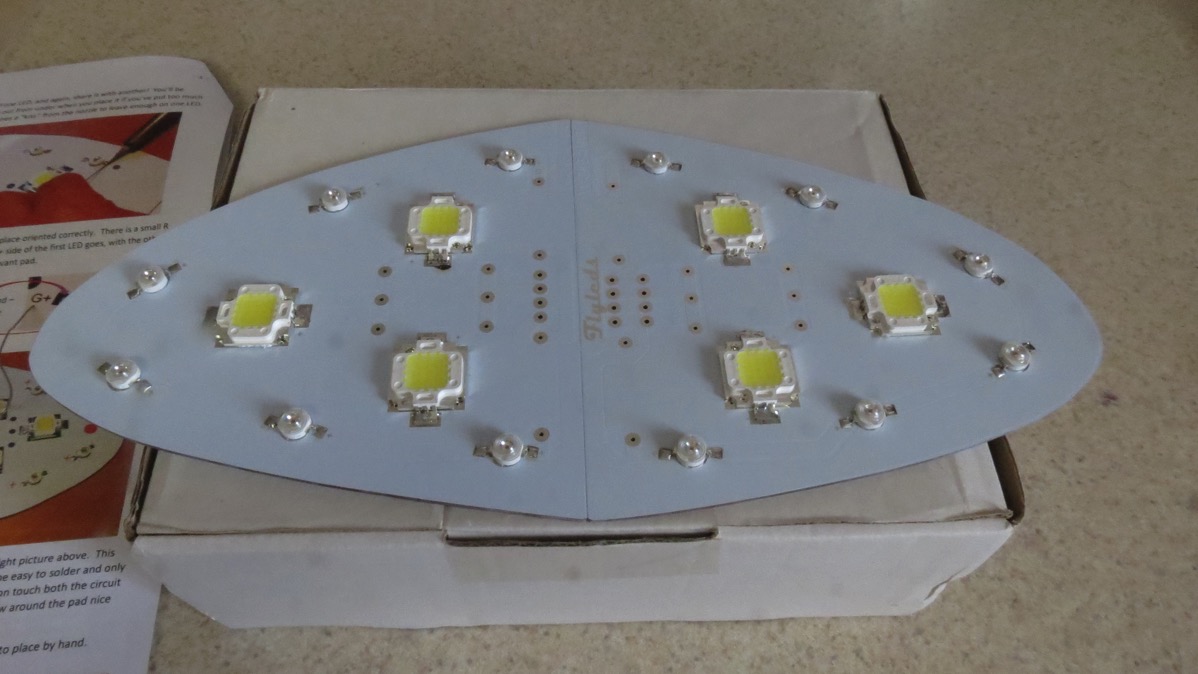 After a dinner break, I moved on to the resistors (working only on the red boards to start with). Nothing too fancy here. The main fun was getting the resistors spaced off the board as per the instructions for better heat dissipation. I found that my rivet gauges were a great thickness to act as an assembly spacer here. With the resistors in place, then there were just the connection plugs, and I had myself a pair of assembled boards!

Now for the real fun – testing. Paul’s instructions recommend using a 9V battery for testing; enough to light the LEDs but not at full brightness. That, of course, wasn’t good enough for me, especially since I have a perfectly good 12V power supply. I’ll just be really careful to block my direct view of the lights, no problem. (If you’re expecting a story of regret, you won’t get it. My plan actually worked just fine.)

Board 1 strobe lights: OK (man those are bright)

Board 2 nav lights: nothing (BOOOOOOOO)

Obviously polarity is super important with the LEDs, and the instructions suggest that reversing an LED is a common reason for a failed test. This can’t be visually verified with everything together; while the LEDs have little + and – signs on each terminal, those are now covered with solder. But hey, this is why I have a multimeter. Turn it on, go to diode test mode, test a known good diode…hm, nothing. Nothing in either direction, actually. That’s…odd. I went and dug up the manual for the thing just to make sure I wasn’t making any stupid mistakes…nope, by the book. Wait, there’s another diode in the control board kit; I’ll use that as a test. That one I was able to test no problem…um, OK.

Finally, I figured it out…rereading the multimeter instructions, this thing will only measure up to about a 1.5V forward voltage drop, and these LEDs look to be about 1.6V. What followed this was a lot of head scratching and attempts to figure out other ways to check the diodes. Honestly, I think the orientation problem is a red herring – there are six nav LEDs on two separate circuit branches of three each. A reversed LED would cause the other two on its branch to not function, but not affect the other branch. So I would have had to switch an LED on both branches – still possible, but mush less possible than switching only one, I think. I also noticed when I had 12V connected to the nav circuit that the power resistors were heating up, which implies that the circuit was not open as I’d expect with a reversed LED.

So for the moment I don’t know what to make of this, My current plan is to take the bad board in to work with me tomorrow – hopefully we have a better multimeter there that I can use to positively verify the LED orientation. If that doesn’t pan out, then I guess my email to Paul about the missing LEDs will also be begging for some troubleshooting help…

So that’s it for tonight, a weird-isa combination of victory and defeat. We’ll see what tomorrow brings now, I suppose.