Well, this was an interesting and somewhat frustrating day, for various reasons. We went out for breakfast and then took care of some errands, so I didn’t get started until early afternoon.

Job #1 was to prepare the delrin bearing blocks that the flap actuator weldment pivots in. These blocks have the sockets for the weldment already bored, but they need to bolt holes drilled and some corner trimming to fit around bulkheads in the fuselage. Well, problem #1 is that the bolt holes are supposed to be drilled to #10 instead of #12. Which is odd, because AN3 bolts, which will go in these holes, call for #12 holes. A bit of research revealed that apparently delrin expands a bit when drilled, so you have to use a slightly oversize bit. I went ahead and marked and drilled the holes to #12 on the slim chance that the bolts would fit.

Next I went looking for the AN3-17A bolts called out here. I found the bag that claimed to contain these bolts. I did not, however, find said bolts. Hrm. After a bit of searching and head-scratching, I finally figured it out. Way back when I built the fuselage rotisserie, I drilled 3/16” holes in the engine mount bolt locations for the firewall fixture. And then I attached those with…wait for it…some long AN3 bolts from the parts bin. Looks like that little decision finally caught up with me.

Eh, no problem, I’ll run to the hardware store in town and get some regular 3/16” bolts to replace the AN bolts with. Well, turns out you can’t get good strong bolts in that size, just cheap machine screwed. Some googling indicated that said screws would have about 1/3 the strength of the AN bolts. I wasn’t too comfortable using these to hold the fuselage on the rotisserie, so I decided that I’d just order some more AN3 bolts. I’ve got a bit of a list built up for a Spruce order anyway.

OK, can’t go forward with the flap weldment stuff. But since I’ve got the blocks out I’ll go ahead and trim off the corners. Should be easy, just mark the cuts and make said cuts with a wood blade in the bandsaw. So I did all the marking, went over to the bandsaw, got the table set up all nice, fired it up, and…after about ten seconds (fortunately before I started cutting) the blade came off. ARGH. Turns out the rubber tires on the bandsaw wheels have degraded such that they won’t stay on the wheels any more. I only learned about this after disassembling said saw, doing some tinkering, and a couple more failed attempts to reinstall the blade and run it again. Well, another thing for the order list.

Fine, what can I work on? I started reading through the manual, and ended up starting more work on the footwells and the forward seat floor that will join them. The floor has a couple of stiffeners that need to be clecoed and match drilled, and then that assembly gets temporarily mounted in the fuse to drill a couple of screw holes in a mount angle. Next the footwells themselves get match-drilled, then clecoed where they’ll attach to this floor panel and those holes match-drilled as well.

Hey look, it’s a photo of the floor + footwell assembly: 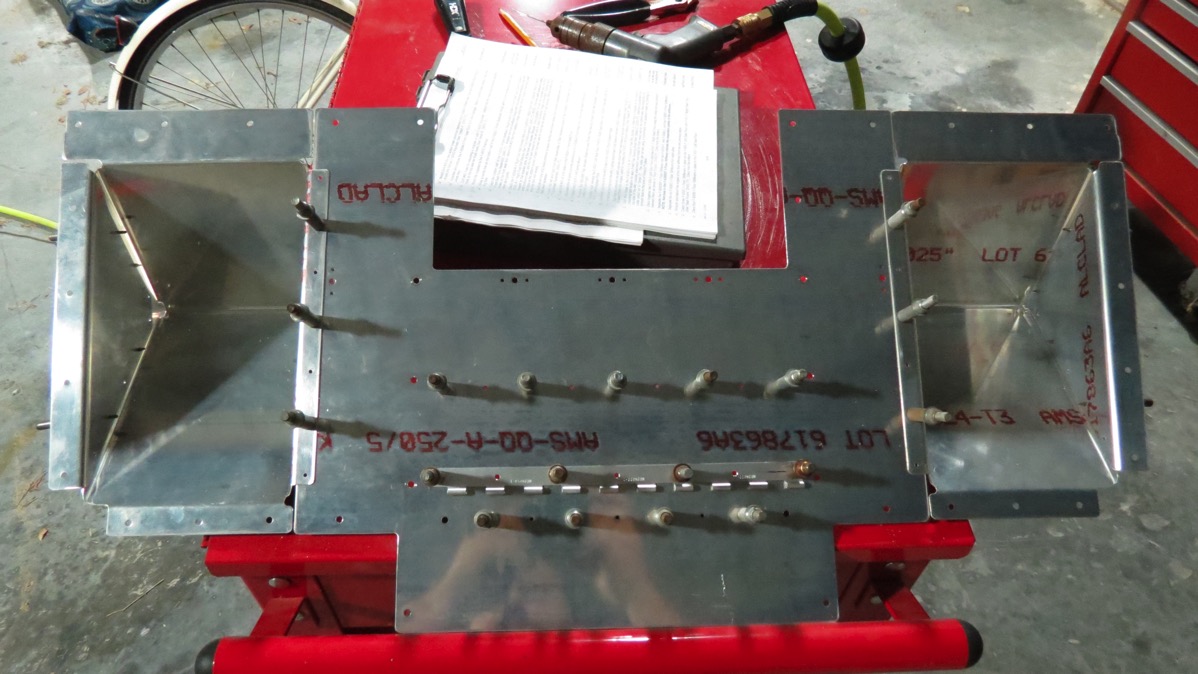 From here, I followed the usual builder’s script of tearing all of that right back apart again and deburring all the holes. From here, I’ll go ahead and dimple/countersink/etc all this stuff, then prep and prime tomorrow before riveting this stuff together permanently. Then I’ll go ahead and final-paint this assembly since it’ll be effectively complete then. This is technically skipping ahead; by the manual I’d be doing similar stuff to the other two floors, fitting stiffeners and so forth, but I can’t move forward with that until I can get the flap bearing blocks done. At least this way I have something to do while I wait for stuff from Spruce.