So I was going to have a nice productive day yesterday, but then a coworker went and invited me and some others on a BBQ run to Lockhart in his father’s Cessna 421…how could I turn that down? Especially since he flew out of Houston Executive, which is about five minutes from my front door. So yeah, that trip combined with other commitments to render yesterday mostly useless. Same thing today, some stuff going on, but I was able to get some actual work done. I need to start getting out here on the weeknights after work, even if it’s just for an hour or so. This weekly-work thing isn’t going to translate into much productivity…

Anyway, when we left off last time, I’d decided to do a modified version of Matt Dralle’s plywood method for aligning the gear legs, but using planks at each end of my aluminum angles for alignment. I tried my idea of clamping the planks in place to counter the tendency of the angles to bend outward, figuring that with everything clamped up tightly, I wouldn’t have a lot of freedom of movement of the gear legs…but I was dead wrong there. I was still able to twist a leg by several degrees before I met resistance. And my idea of sighting down the angles to identify straightness – well, I tried that a bit too, and just found myself unsatisfied with the whole thing. I felt there was a significant margin of error all around, and so I scrapped the idea. Instead, on our way home from our Saturday evening event, we swung by Home Depot and I picked up a sheet of plywood. (which I strapped to the roof of Josie’s SUV, which I in turn drove home at speeds no faster than 45 MPH)

This morning, I set about cutting the sheet. The one good result of the failed plank method was that I had a great preset measuring stick for cutting the plywood. Of course, I took great pains to make my cut as square as possible, setting up a straight guide for the circular saw, and measuring everything about 40 times. In the end, I was stressing over about a 1/32” variance, which I then calculated would result in a 0.04° error alignment, and I’m pretty sure the entire alignment process will have far less precision than that. So I quit stressing and made the cut. 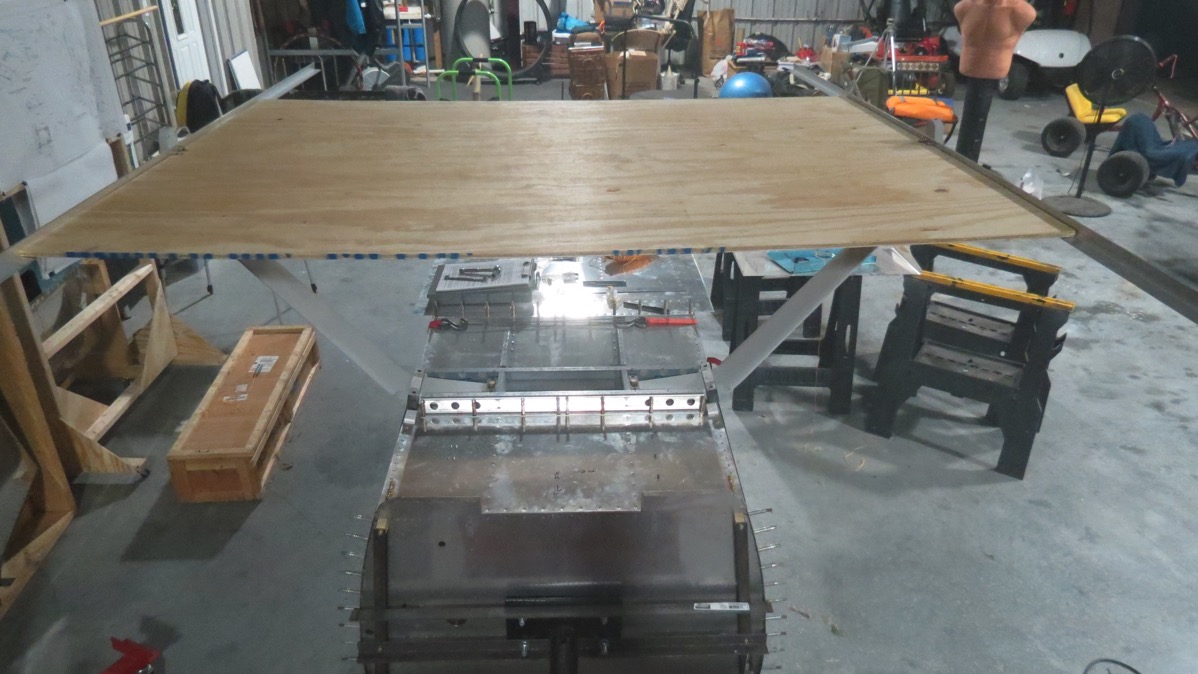 I did have to make a bit of a relief cut to make room for the nuts where I attached the angles: 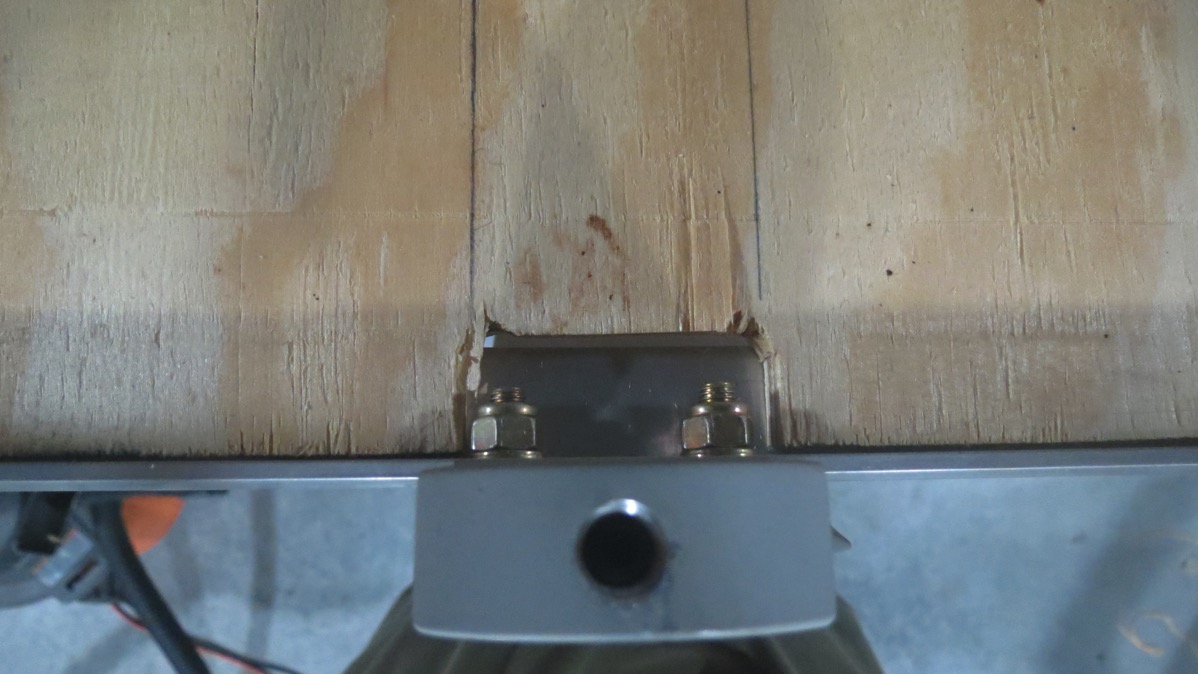 I also came up with what I thought was a brilliant idea – to align the gear legs relative to the fuselage, I figured I could just make reference marks on either side of the plywood, and align them with set marks on the gear legs. Hypothetically, if the legs were misaligned to the fuselage, these marks wouldn’t be able to line up with both legs at the same time. Here’s a look at the marks: 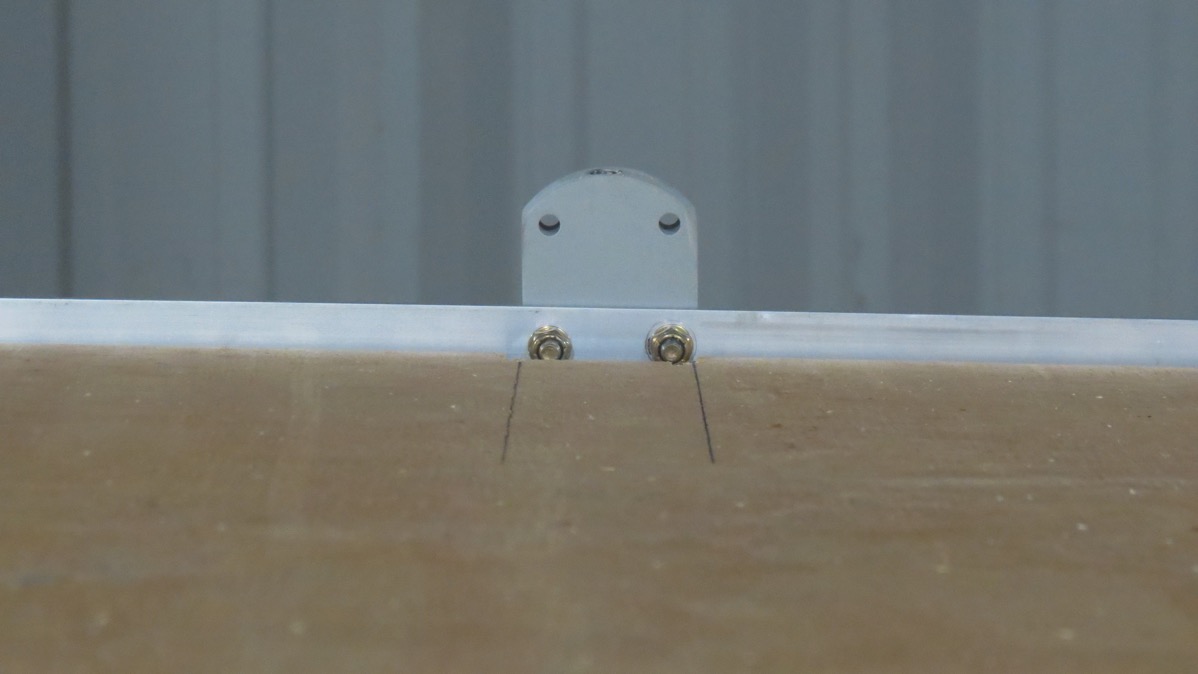 Fun thing to keep in mind: None of this is going to be used to align the legs for drilling right now, this is just to get a rough alignment so I can trim the gear crossmembers. With that in mind, and the plywood in place, I got the legs nice and parallel, and then aligned them carefully using those reference marks. But when I went to marks the cut lines on the crossmembers, one of the marks was suspiciously further aft than the other. I’d always intended to double-check the alignment using plumb bobs before final-drilling, but it seemed that I needed to go ahead and do it now.

So I hung one plumb bob from the tailspring out back, and then one from each gear leg. And when I measured the distances (boy, was I glad I had two tape measures, rather than having to go back and forth comparing with just one), there was almost a full inch of difference! Well, so much for my genius idea with the reference marks.

Here’s a look at the club bob setup on a gear leg: 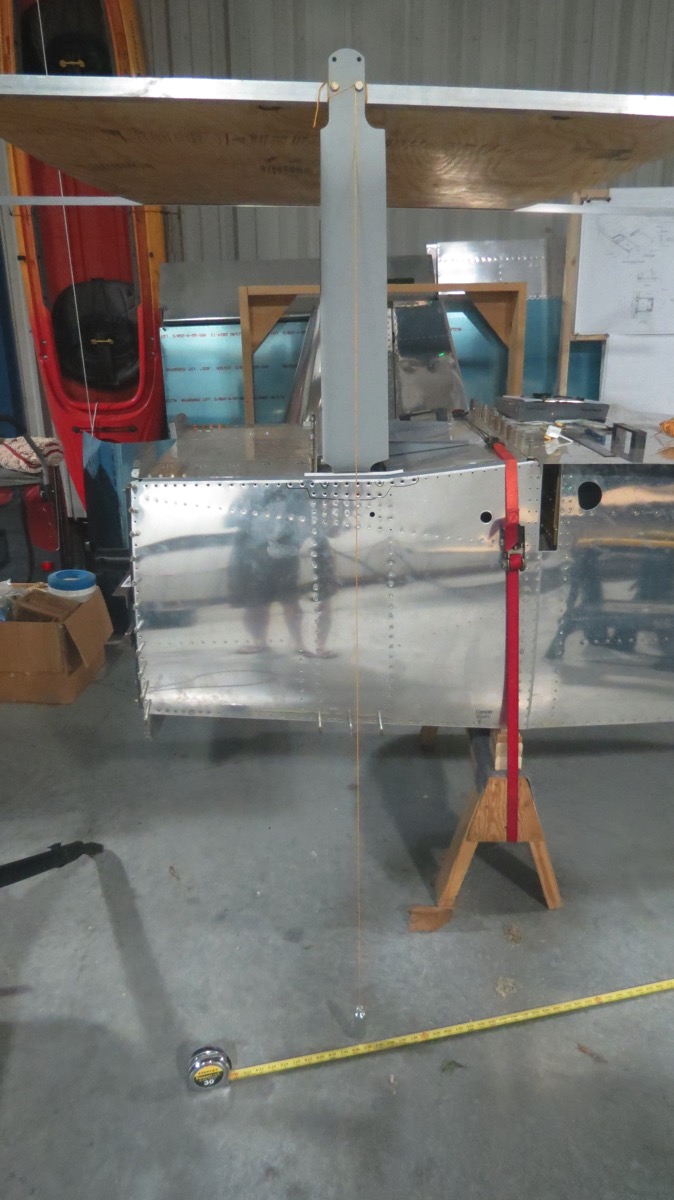 And the tape measures meeting at the tail plumb bob: 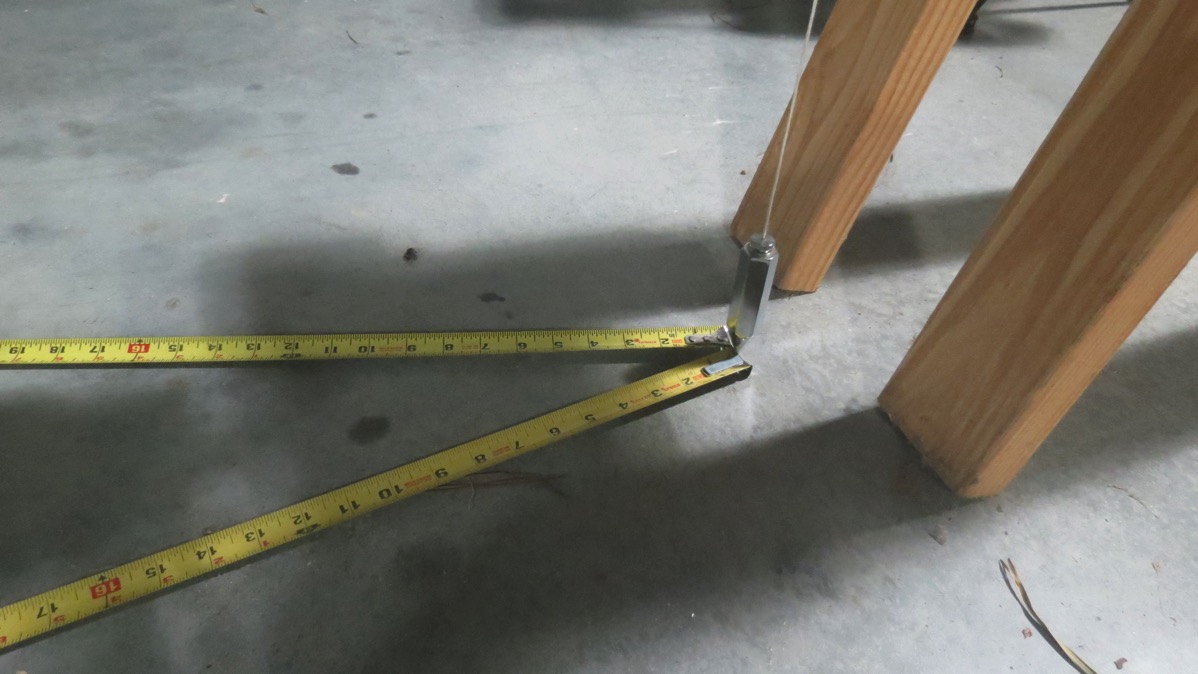 So after a few rounds of tweaking, I was finally happy enough with the alignment to mark my cut lines for the outboard brackets: 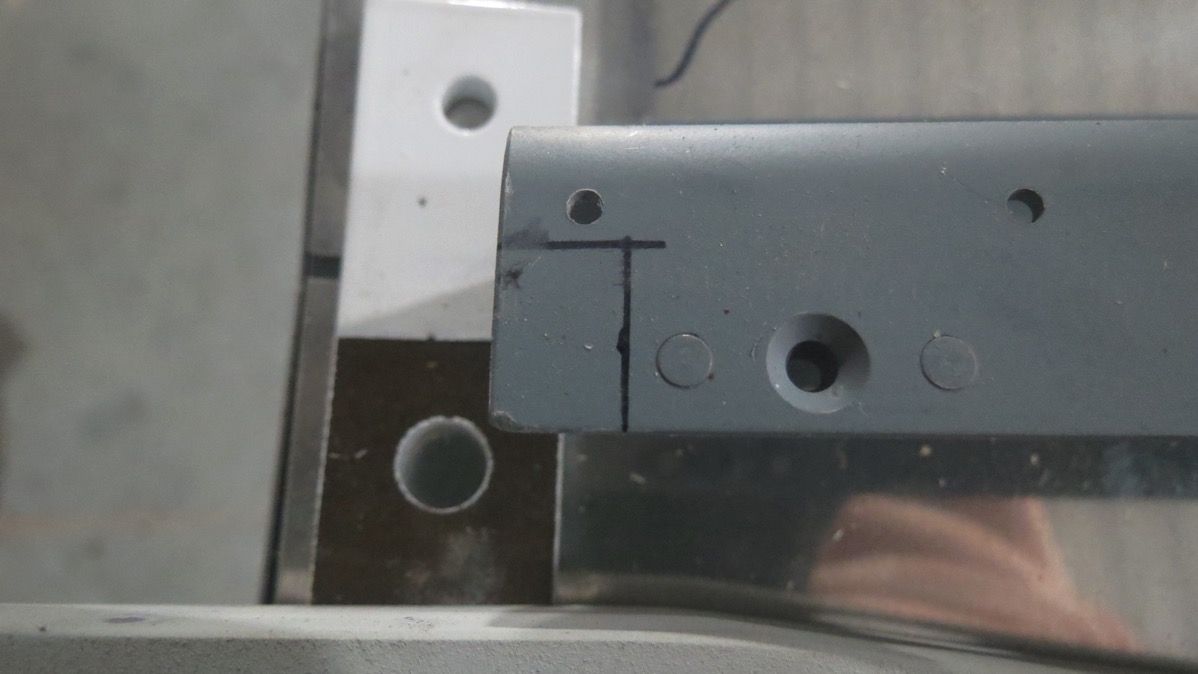 Of course, now I have a new problem: Cutting to that point will violate minimum edge distance to that rivet hole above the line in the photo. The other side isn’t quite as bad as this one, but still close. I’m pretty sure this is an OK compromise to make – I’d expect this to be a low-stress area – but I’m going to ask the usual suspects at VAF for a second look. I’m pretty sure this is an issue specific to the Grove legs, which I understand to have larger brackets than the factory legs. I suppose worst case, I could add a second rivet in between those two to shore up the area a bit – but I do honestly feel that it’d be unnecessary.

We’ll see what I find out. Now the real question is, will I actually get back out and work some more tomorrow night?