Eight months? Really? I figured it had been maybe six at the most, but 8+? Wow. Kind of reminds me of the last time I moved, when I said something like “it might be a couple months before I work again” and it ended up being six or so… This move has been even more interesting. For one thing, there was more stuff (including that pesky airplane, which got a truck all to itself), and for another, there’s a lot less space inside for storage, so getting stuff put away has been a challenge. (and to be honest, it’s still not really “done”)

But hey, I’ve got a nice roomy hangar to build in now, no more cramped garage!

Anyway, last week I made the first useful move, scooting the fuselage away from the wall where it had been sitting for a while, and flipping it over on the sawhorses. Today I first had some general housework to do (mowing and such), then it was off to Home Depot for some shop materials. Back in Atlanta, I’d built a neat little vertical rack for hanging up plans sheets. It was a useful thing, but unfortunately it became a casualty of the move as the truck filled up with stuff. I never felt like I had enough room in the garage at the old house for such a thing, so I just kept the plans laid out on a workbench. With all the newfound space, I decided it was time to build the second incarnation: 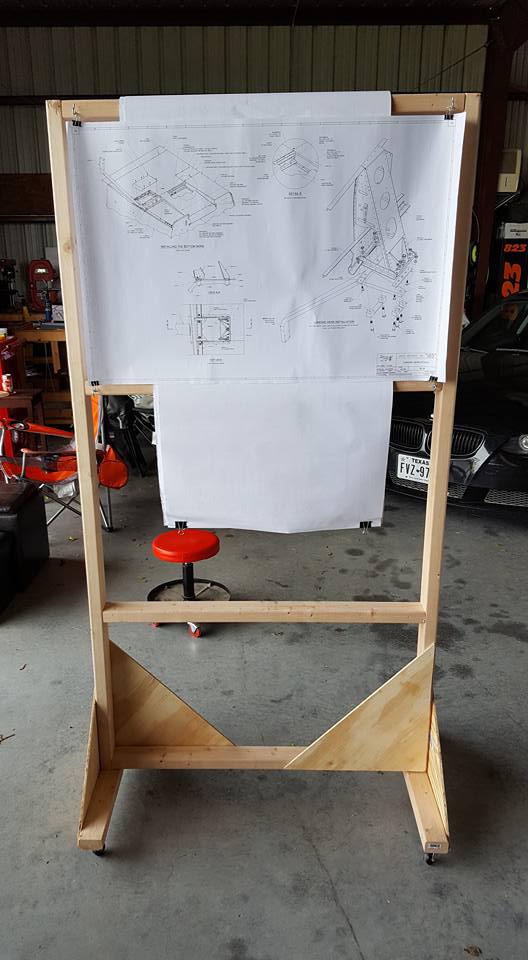 One small improvement from the last version is provision for binder clips at the top and bottom of the sheet. It’s kind of necessary out here, because it’s almost always windy, and we have the hangar doors open most of the time. Pretty sure that without the extra clips, there would be some…incidents.

So with that done, it was time for some real work, and time to finally put these nice Grove gear legs to work. The basic gist of fitting the gear legs goes like this: There are three predrilled holes in each inboard weldment, and that’s it. Only one of those holes is for the gear leg itself, where a 7/16” bolt goes through the leg. That bolt becomes the pivot point for future fitting, which involves carefully aligning the gear legs and eventually drilling the final few holes in the outboard and inboard weldments, at which point the legs better be aligned… (at least there are shims available for the inevitable alignment tweaking)

So first up, I final-drilled the predrilled holes in the inboard weldments, then put the inboard and outboard wear plates in place, followed by the legs themselves and the inboard brackets, all held in place by that single 7/16” bolt. Now, the next task according to the manual is to put the outboard brackets in place and trim the landing gear crossmembers for clearance. For the factory legs, I believe this trimming is pretty minimal, but the Grove brackets are a little bigger. My real issue, though, is that the location of those outboard brackets (and by extension, the extent of the trimming) is indeterminate until the alignment is at least roughly set. Again, maybe this is less of an issue with the factory legs, but for the trimming I’ll need to do, I felt it was best to jump ahead to the alignment.

Here again, things get fun. The method described in the manual seems pretty arcane to me, involving plumb bobs hung from the inboard and outboard portions of each leg, and another at the tail on centerline. As best I can tell, the idea is to use the bobs on the gear legs to get both legs in the same plane, and then use the bob at the tail to square that plane to the fuselage centerline. What we’re really going for is to A) have the faces of the gear legs parallel to each other (i.e. zero toe) and B) have the faces parallel to centerline. My issue with the plans method is that A) iit seems like a roundabout method to get the faces parallel to each other and B) it depends on the forward edge of the gear leg being perpendicular to the face, which I don’t trust. Here again, maybe it’s different for the Grove legs than the factory ones, I dunno.

Another builder, Matt Dralle, took a different approach that I think is kind of deviously simple. He used two long pieces of aluminum angle, match-drilled to the axle bolt holes, and bolted to each leg. He then used a sheet of plywood between the angles to get (and keep) the legs parallel to each other, leaving only the task of getting them parallel to the fuselage. I decided to modify this approach a bit, replacing the plywood with two identical-length wood planks, mainly because I don’t have a good vehicle for getting a 4×8 sheet of plywood home.

Drilling the angles was easy enough, as was bolting them in place: 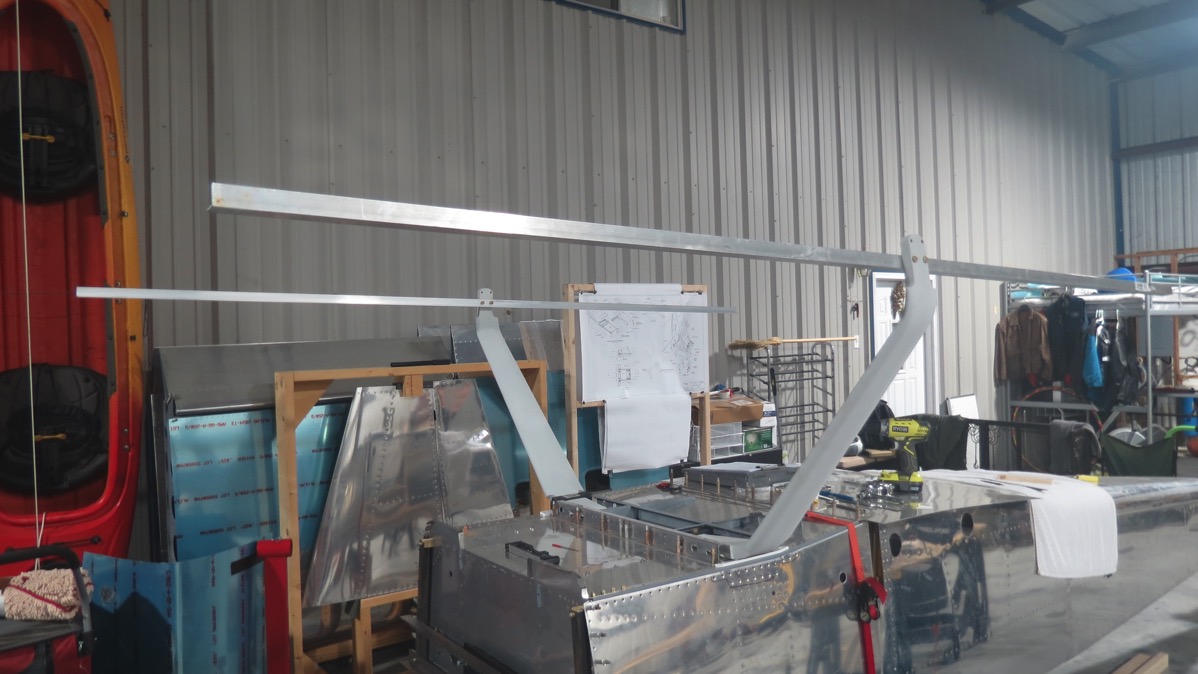 Next up was cutting the planks. I just used a couple 1×4 common boards. I measured the distance between the angles at the gear legs, marked one board, double-checked the marked board against the angles, clamped both boards together (gotta make sure they’re the same length!), and cut them with the chop saw. But somehow, despite my double-checking, the resulting boards were 1/4” too short for the gap between the angles. Harrumph. But at least it was a nice round number like 1/4”. So I just grabbed some 1/4” plywood scraps and made little spacers to nail to the ends of the boards: 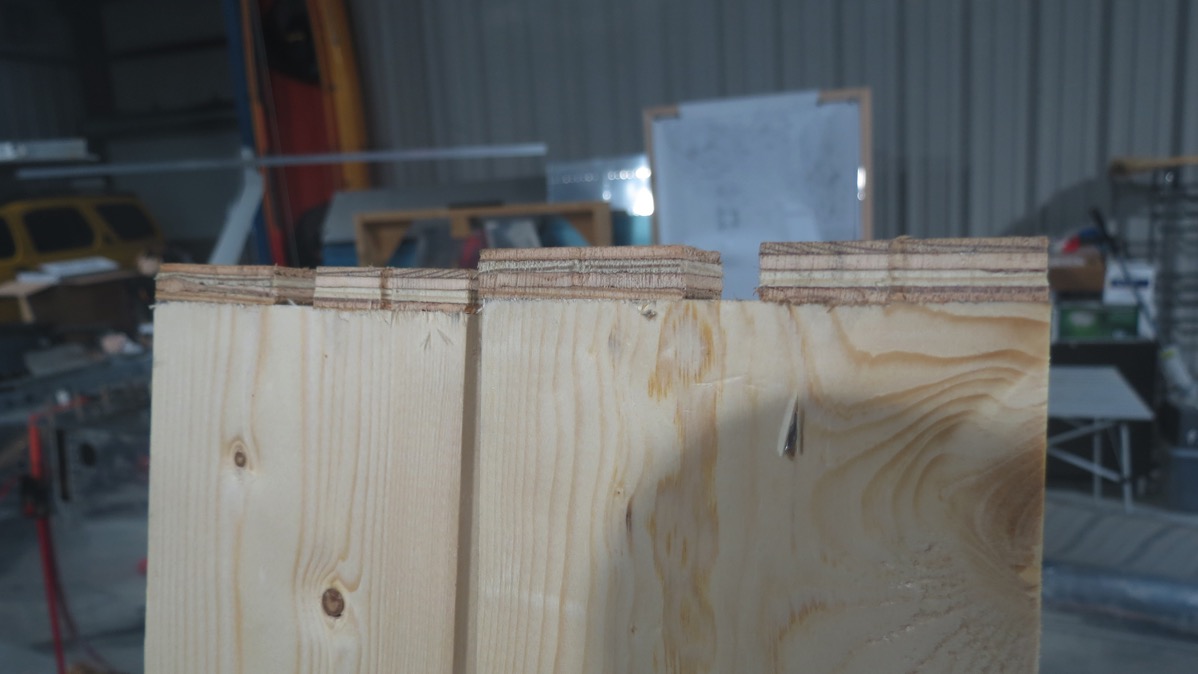 Much better! Now to just put them in place at the ends of the angles and see how smart I am! Except…wait…if I put a board on one end and snug the angles up to it, the angles at the other end are too far apart for the other board to even sit in there. Um, what? I looked again and realized the angles were distorted ever so slightly; if I sighted down them from front to back, they were a bit concave (as viewed from outside the fuse). So I applied some brute force to them until they were straight. That should fix the problem! Nope, same thing…hm. It turns out that the act of putting the board at the end of the angles appears to bend the ends out a bit. So I’m not just going to be able to rest the boards in place. I’m thinking that I’ll just end up clamping the boards to the angle ends to keep everything in place, and I’ll just have to add the step of sighting down the length of the angles to check that they’re straight before committing the any drilling.

We’ll see how that goes another day, cause that was where I decided to call it a day. Overall, it wasn’t huge in terms of time invested, but hey, I did something, which is way more than I’ve been doing…