Tonight I just worked on the cockpit rails. Well, first, I cleaned up from last night, since I left tools out all over the place after finishing the rotisserie.

About a third of the cockpit rail rivets are accessible with the squeezer; the rest obviously have to be shot with the gun. This is slightly challenging since there’s only a small flat area around the rivets, then there’s a bend that has to be worked around. All in all, though, the riveting was pretty easy, especially with the new ability to rotate the fuselage sideways. I’m pretty sure this would have been a lot less pleasant if I’d had to lean over the rails to rivet.

The only real challenging part was the area where the seatback support plates are already in place. After checking the construction manual, I realized that the original build sequence is to rivet the cockpit rails first, then the plates – so I kind of did this out of order. That would have provided much better access to the rails, but also would have made it a lot harder to rivet the plates. It actually wasn’t that tough riveting under the plates, but I had to get creative to buck them. Somewhat amusingly, I don’t think this is the first time I’ve duct-taped a bucking bar to a stick: 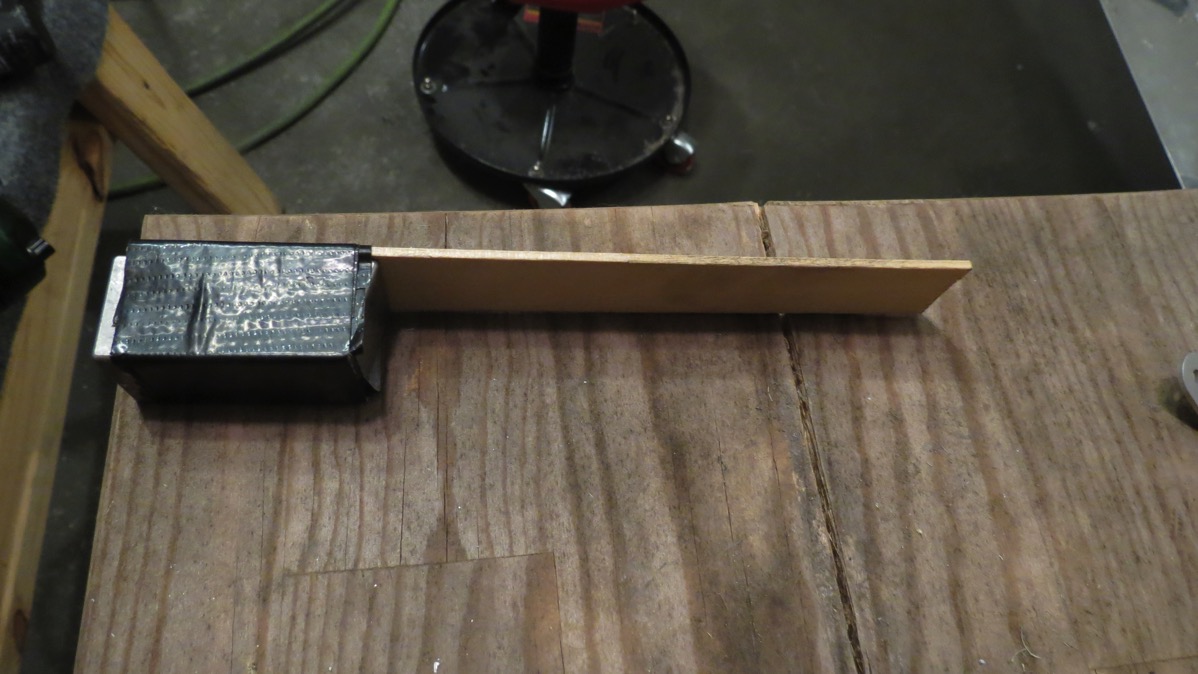 There was also another issue that came up here. On the left side of the cockpit, the longeron sits a bit low, and as a result the mid side skin sticks up just a hair above the cockpit rail. By the time I realized the consequences of this, it was too late – I’d put a nice series of dents in the skin while riveting the rails: 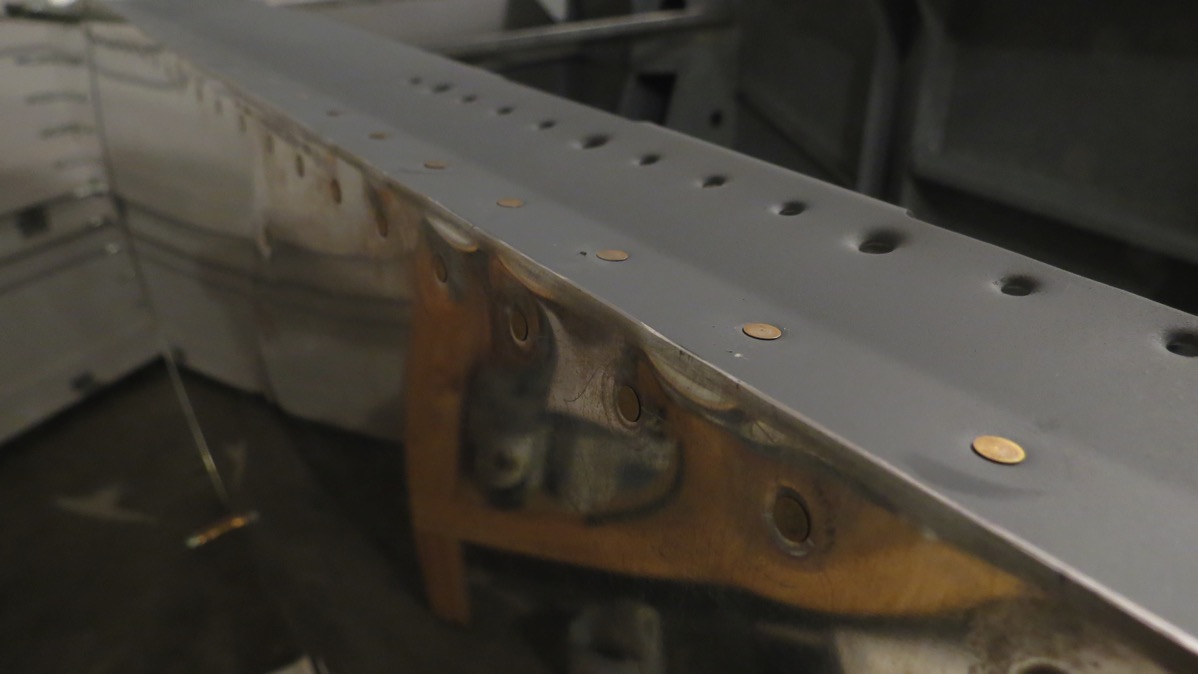 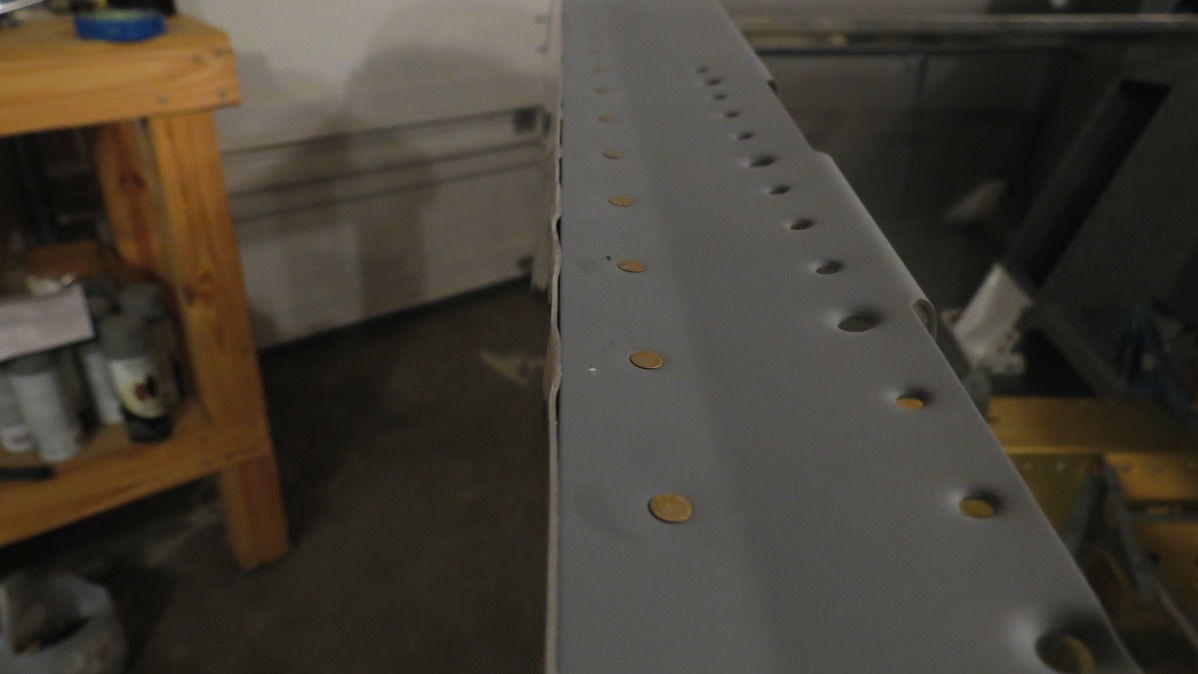 Fortunately, I was able to do a decent job smoothing the area out with the rivet gun, and then I filed down the excess skin a bit. It’s not perfect, but it looks much better now. I believe this area will eventually be covered by the canopy skirt anyway: 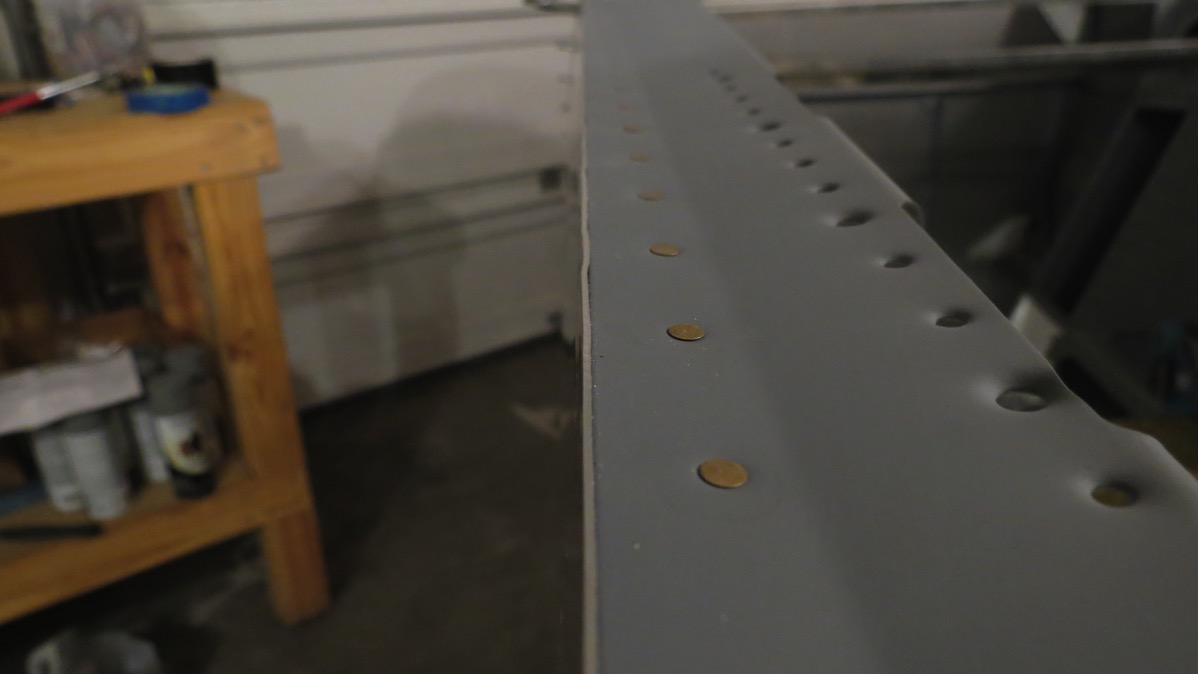 Finally, I masked everything off so I could shoot the interior paint on the rails. I’s previous debated whether to paint this like the interior, or maybe have it match the exterior – obviously, I decided on the former. 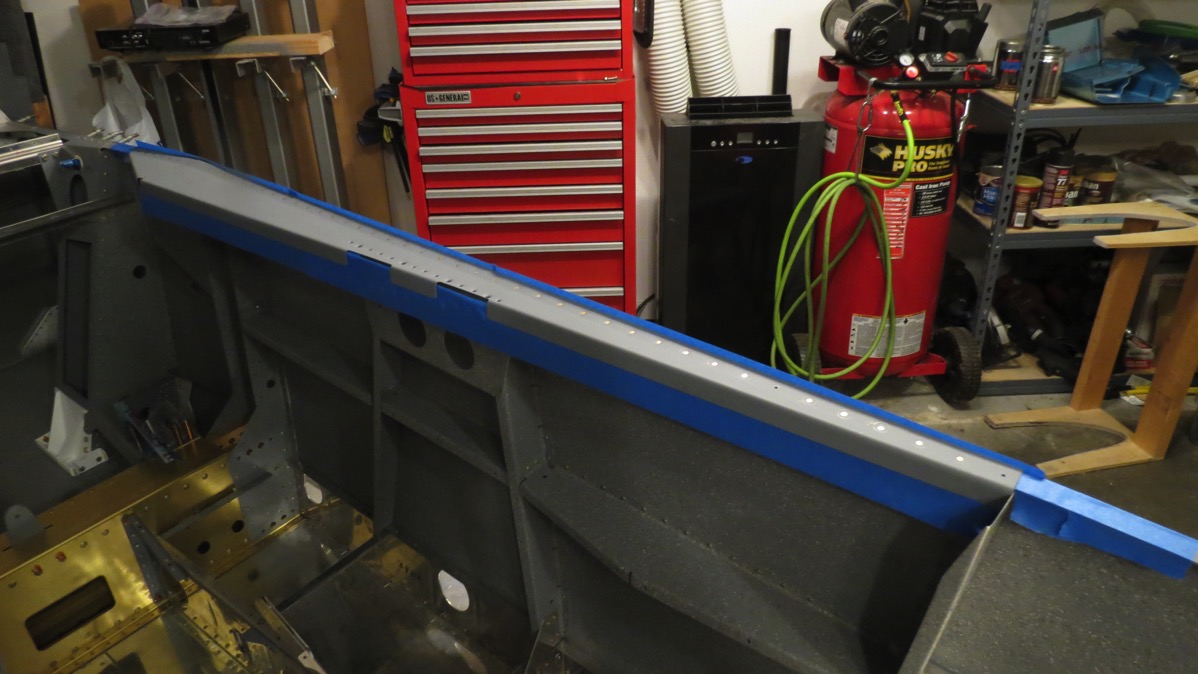 The rotisserie really came in handy here. The texture paint shoots best on a vertical-ish surface – easy to do with the rotisserie, basically impossible otherwise. The finished product: 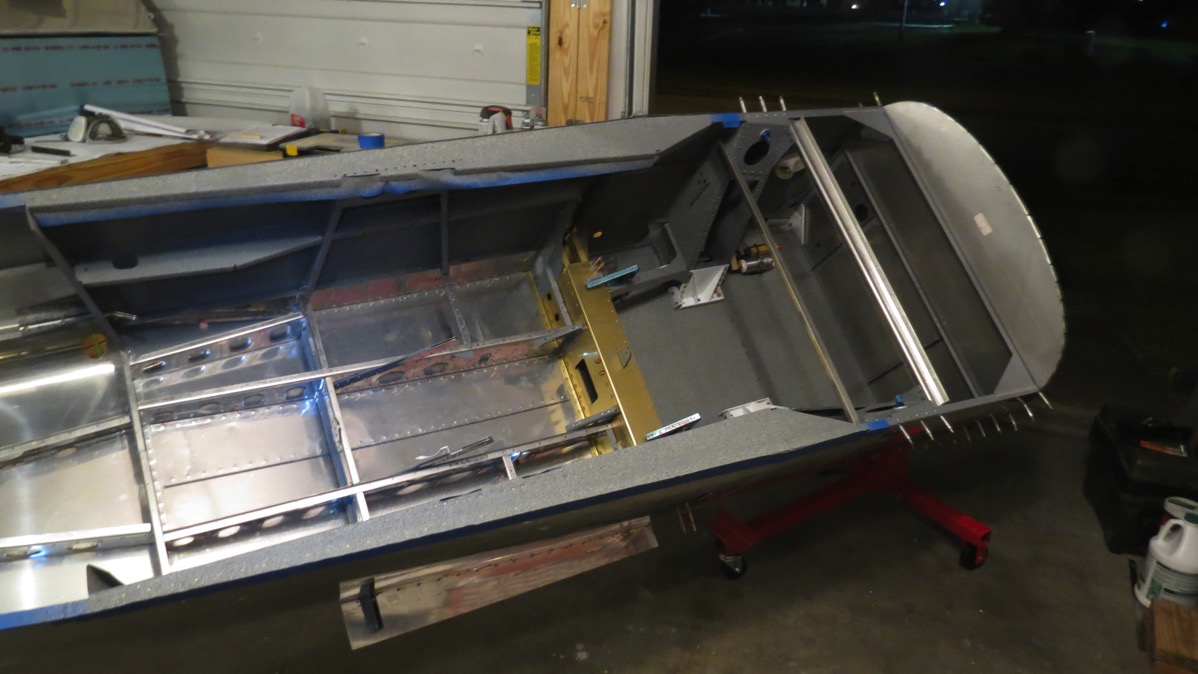 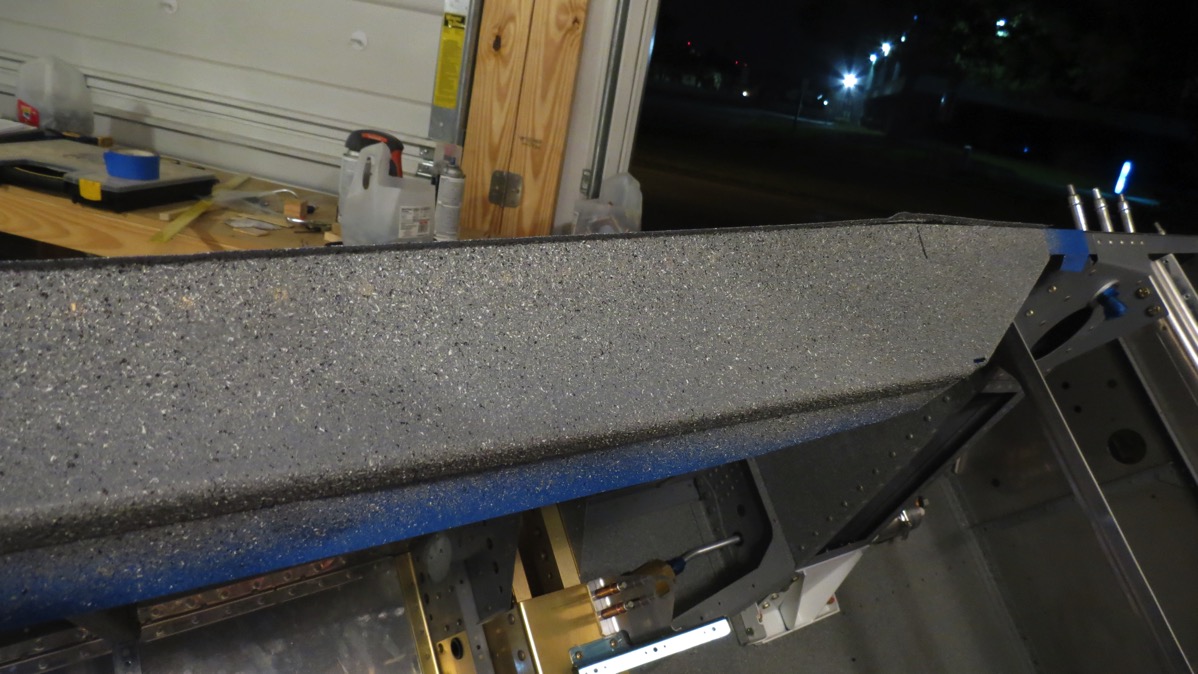 This does present an interesting problem for tomorrow – this texture paint takes a while to dry. I usually try to leave it alone for a couple days at least. The next task is mounting the seatback support, which involves working in the same area. More notably, it involves shooting some more flush rivets on the rails, which I didn’t think of before painting – I was mostly thinking it would be easier to mask for paint without the support in place. I’ll probably just skip shooting those rivets for a week or so to let the paint dry, and even then I suspect I’ll have to do some touch-up afterwards. Oh well.