Fuselage riveting, part 8 (plus bulking up my next parts order)

Quite a varied day out in the shop. The main goal for today was to reach the point of flipping the fuselage over. The only spots left where I thought I could so solo skin riveting were on the aft side skins between the two aft most bulkheads, the mid side skins just behind the wing spar passthrough, and the lower edge of the mid side skins where they rivet in assembly with the outboard seat ribs.

I tried shooting the rivets at the lower edge of the mid side skins, but quickly decided they should be a two-person job. The bottom skins stick out a bit where they’ll mate with the wing, and so shooting these requires my looong rivet set. This, in turn, makes it rather awkward to shoot and buck while reaching way down inside the cabin. I shot one rivet like this and it was barely acceptable. I figured the quality was likely to get worse if I kept trying, so I gave up on those.

The aft side skin rivets were a bit tedious as well. There’s not a lot of room at all in that aft most bay, especially when shooting the rivets close to the bulkheads…but I got it done.

Any further skin riveting would have required flipping the fuselage – but as I mentioned before, there were other tasks to do with it right side up, which I decided to take care of first. First up was riveting the aft deck in place, which was easier than I expected:

Next I riveted the aft armrest bulkheads to the gussets that attach them to the rear spar carry through assembly. Then it was time to rivet a couple of floor angles to gussets on the forward armrest bulkheads – and here was where the day started to get interesting. I clecoed the angles in place, then noticed that they had nutplate attach holes, but no nutplates attached. I looked back through the manual and saw no reference to riveting the nutplates. I figured it would be far easier to rivet the nut plates with the angles out of the plane, but I wanted to make sure it was OK, so I went in for some research. Turns out there’s a spacer that goes on top of the angles, but under the floor, and it needs to be riveted in assembly with the nutplates. The problem there was that I’d already countersunk the angles for nutplates. That’s not a good thing if another piece of alumni will go on top and leave a void there…well, time to add something else to my shopping list.

Next, I riveted the forward armrests to the center section bulkheads, then clecoed the bulkhead caps in place. They won’t get riveted yet, but presumably should provide some rigidity while other work is going on. The next item would have been to rivet the seat back support plates in place, but they needed to be primed and painted first. So that left nothing to do but to flip the thing.

To do this, I installed the tailwheel spring to act as a pivot point at the rear, then moved the rear sawhorse so the spring was sitting in it instead of the tail structure. This would let it be a pivot point while I moved the forward end. At the forward end, I just rolled the fuselage on its side, then over complete y so it rested on the longerons. I also moved the forward sawhorse back a bit; this raised the fuselage up a touch and also gave me some extra breathing room in terms of sawhorse width. I’d initially thought I might want to raise the forward sawhorse to provide more working room under the fuselage, but as it is, I can sit on the floor and be at the perfect height to work underneath. 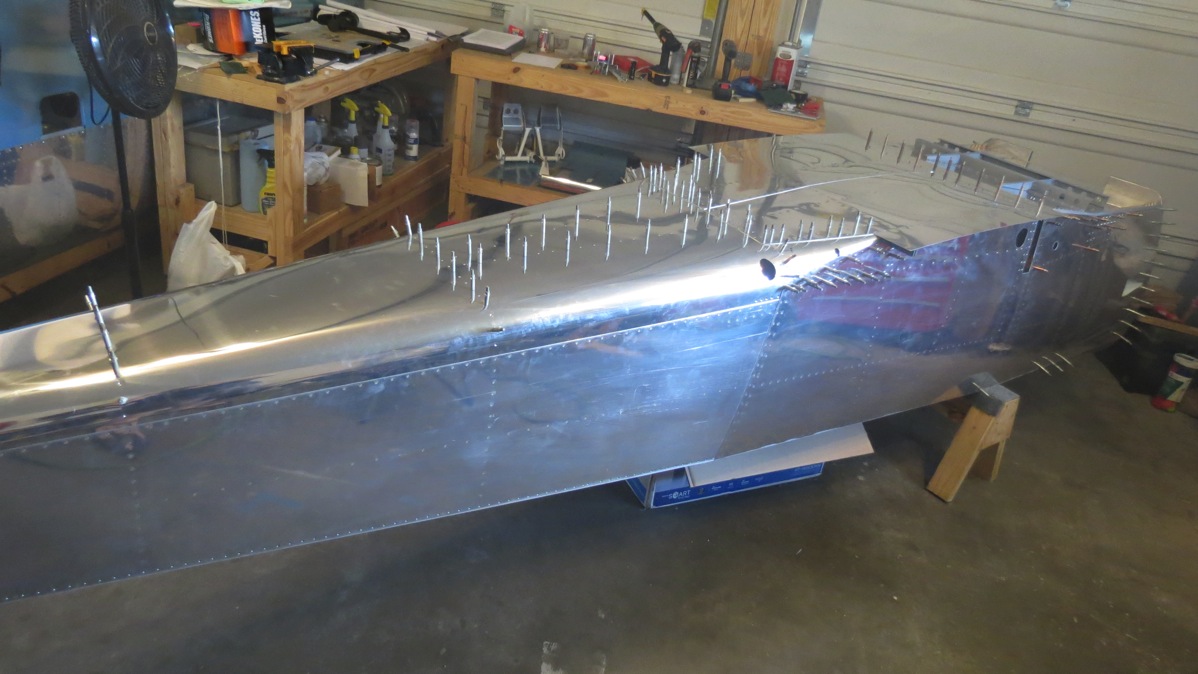 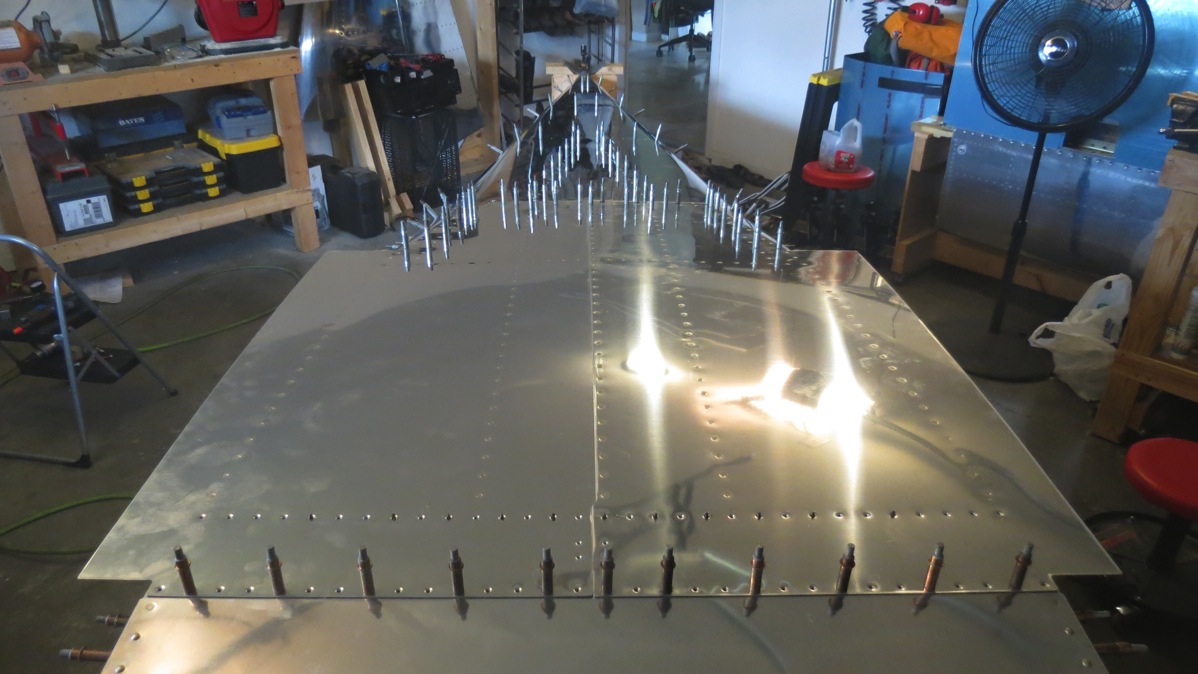 Rather than jump right back into riveting, I decided to get out the forward bottom skin and fit it in place. The practical reason here was to see if the two blind rivets I set forward of the spar pass through would interfere with fitting the skin, but mostly I just wanted to see it in place and cackle a bit. Reading forward in the manual, though, I realized I made a mistake a long time ago. When I installed the forward landing gear crossmember here, the manual said not to rivet it. I took this to mean not to rivet it to the skin, and didn’t do that, but I did rivet it to the intercostal ribs. That, it turns out, was a mistake, because that spot also has to be riveted in assembly with the forward bottom side skins.

The really fun part about this is that the factory heads are in a super tight location: 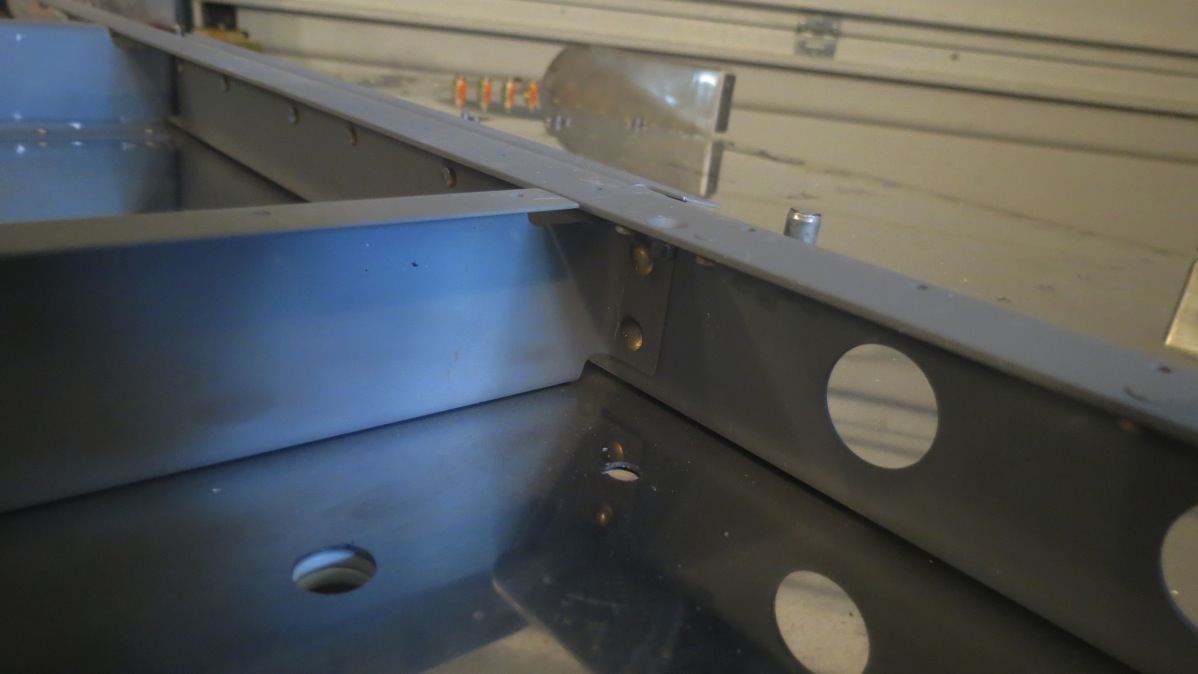 I pretty quickly determined that it would be nearly impossible to get a drill in there to drill these out – and if I messed up the intercostal ribs, things would get worse since I’d have to remove them as well. So I decided instead to grind off the shop heads – this would ruin the crossmember, but that seemed better than the consequences of ruining the ribs. So I got out the die grinder and a cutting bit and went to work (I really need to clean the camera lens): 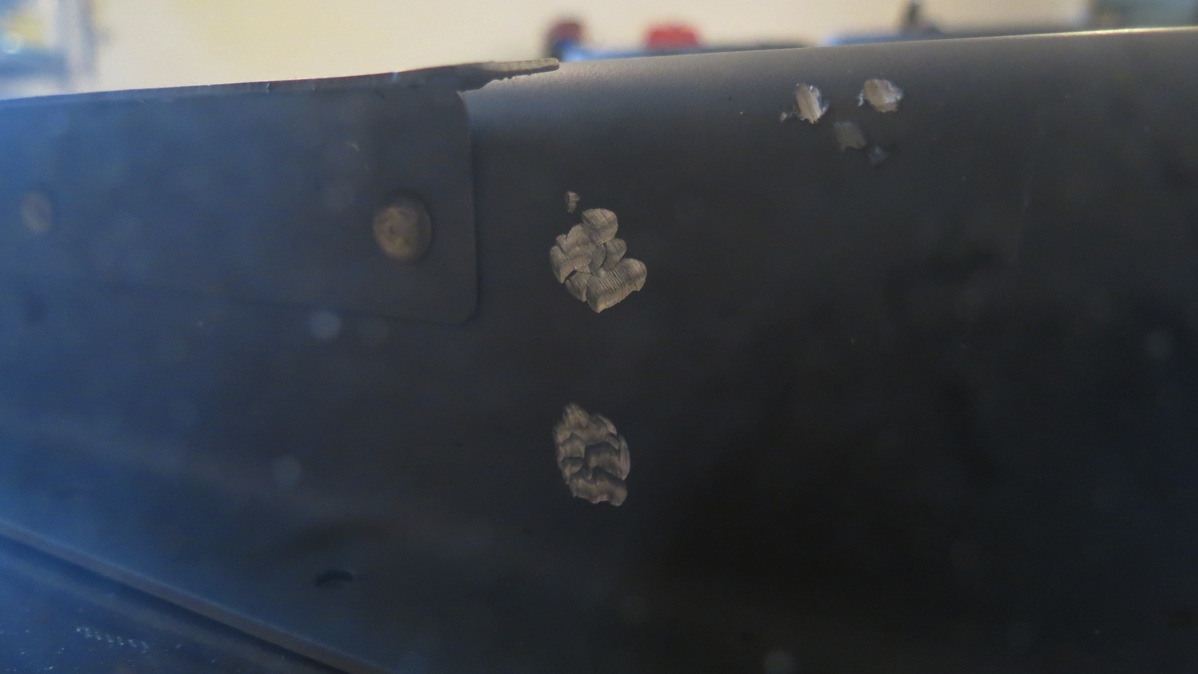 Yup, there’s another item for the shopping list. Anyway, back to fitting the forward bottom skin! I was able to get in place even with the blind rivets in place, which was nice. Then I decided to cleco the cooling ramp in place as well – but the flanges interfered. I assembled this part over a year ago, and part of the work was trimming the flanges for clearance. Turns out I trimmed the wrong ends of the flange. Another item for the shopping list.

I’m not really sure why they have you put the cooling ramp together so early. The manual even makes a point if how you won’t actually install the thing until much later. If I was just making the thing now, my mistake with the trim would have been obvious, but when I was working off the plans, that wasn’t really the case. Oh well.

I wrapped up the day by crawling under the fuselage and riveting the rear armrests to the rear bulkhead – these rivets where impossible to get to from above, but easy while sitting under the fuselage. The only downside was that it was kinda hot under there. I also took those seat back mount plates outside and primed and painted them. Whenever I get around to flipping the fuselage over again, they’ll be ready to go.

And that’s it for today. Tomorrow Josie should be able to help me work on some of those two-person rivets. The end of fuselage riveting is in sight!