I’d wanted to continue working on the rear rudder pedal brackets today, but that didn’t really work out. The idler brackets, which attach to the base of the gear towers, only have one prepunched hole; the other has to be drilled in assembly. This is kind of a problem, since the hole has to be drilled in a super tight spot. There’s no way to get an angle drill in there to drill in assembly, and I couldn’t even figure out a way to try and mark the hole – an option that I didn’t really like anyway, since it not only depends on the mark being accurate, but me accurately punching the center of the marked hole for drilling. I briefly tried to fabricate a small transfer punch for this, but pretty rapidly decided that I might as well just buy a hole duplicator set instead.

So I set the rudder pedals aside and moved on to installing the mid side skin assemblies instead. I don’t really need to worry about access for the rudder bracket any more, since the guide brackets are fitted, and they’re the only thing that would have been blocked by the mid side skins. Adding the skins was just a matter of doing a bunch of clecoing. I also had to move my sawhorses around a bit – initially, I had one just behind the firewall, and the other under the center section. But once I added the mid side skins and started clecoing, the fuselage became pretty well-balanced on the center section, moving around like a teeter totter while I worked. So I moved the rear sawhorse back to the rear spar area, and now everything is a lot more smooth. 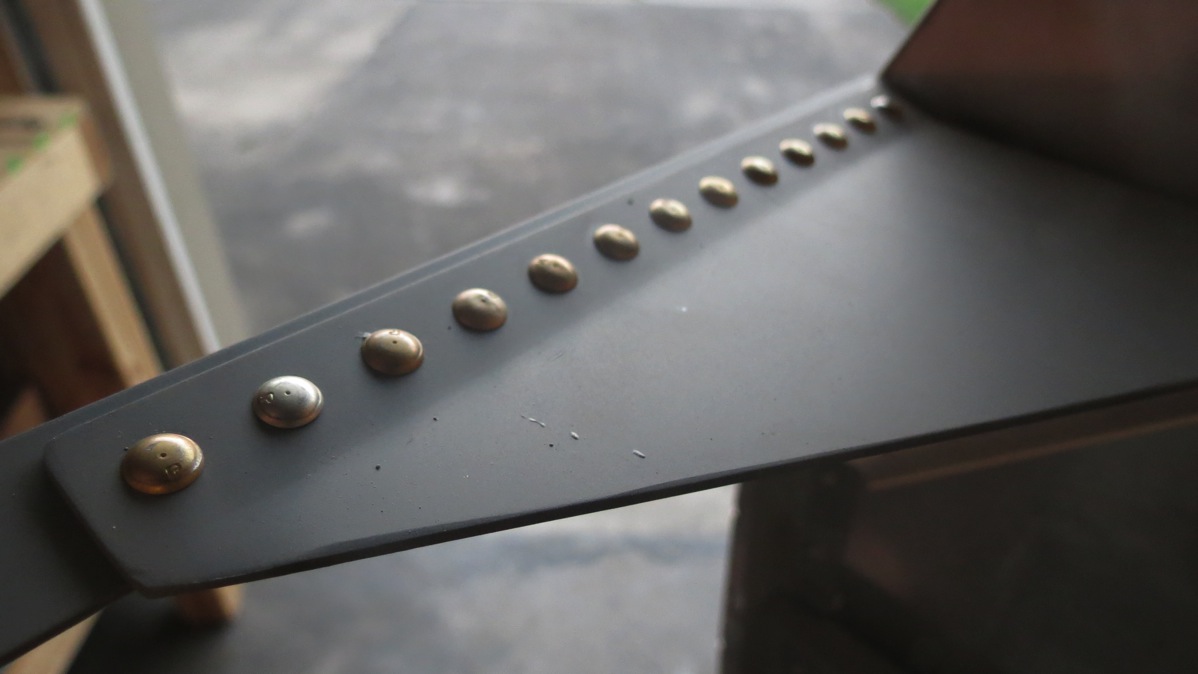 The next steps in the instructions were for assembling and installing the forward side skins, but I’m delaying those until after I’ve installed the fuel pump and filter, and fabricated the required fuel lines, and maybe done the hard brake lines as well. Bottom line, it’ll be a bit before I’m ready to close this area up. So I skipped forward to the addition of the tail cone. First step was to cleco the bulkhead at the aft end of the seat ribs into place, and then rivet to the outboard seat ribs. Then I riveted the baggage ribs and angles together, and clecoed them in place. Riveting these looks mildly cumbersome, though, and I was getting a bit tired, so I decided to call it a night at this point.

Once the baggage ribs are riveted, I’ll move on to dimpling, assembling, and installing the aft side skins, along with the rest of the tailcone. Then I guess I get to flip this beast over and get going on a whole lot of skin riveting. And of course, there’s still the matter of fuel and brake system stuff. But first, it’s time to place another Spruce order…

Fun aside: I was working with the garage door open today, and it was amusing watching people on the sidewalk staring in the garage as they went by. I’ve reached a point where it’s obvious that something unusual is going together in here: 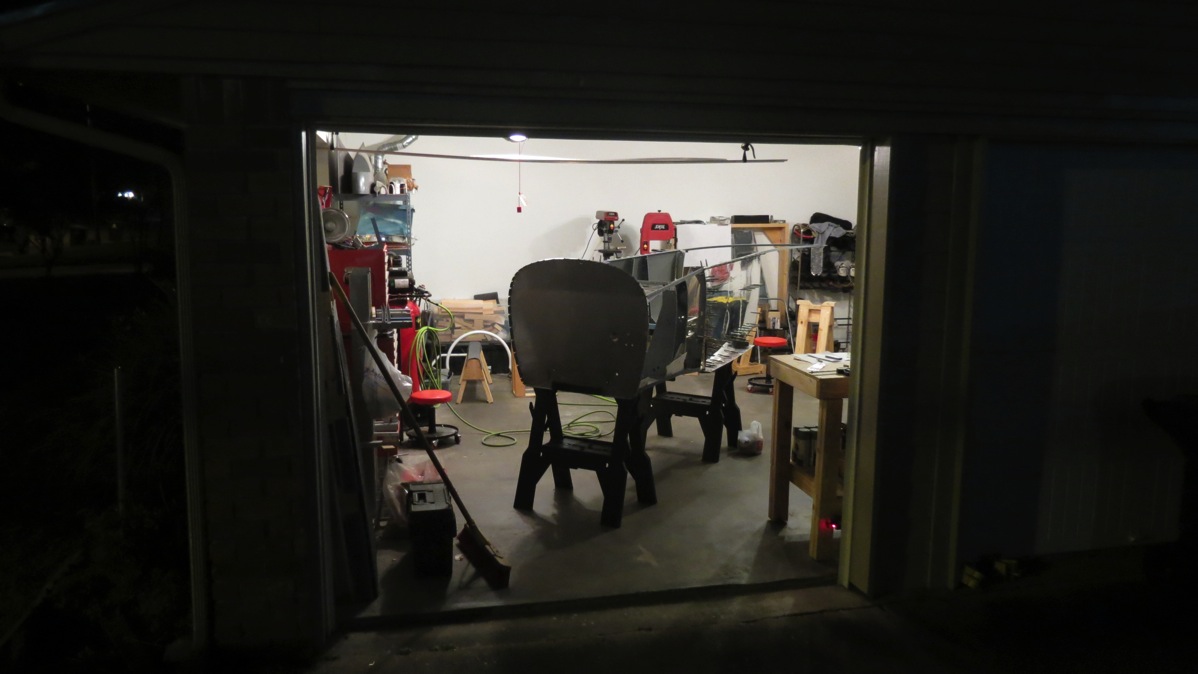 And here are a couple more token photos of the current state of assembly: 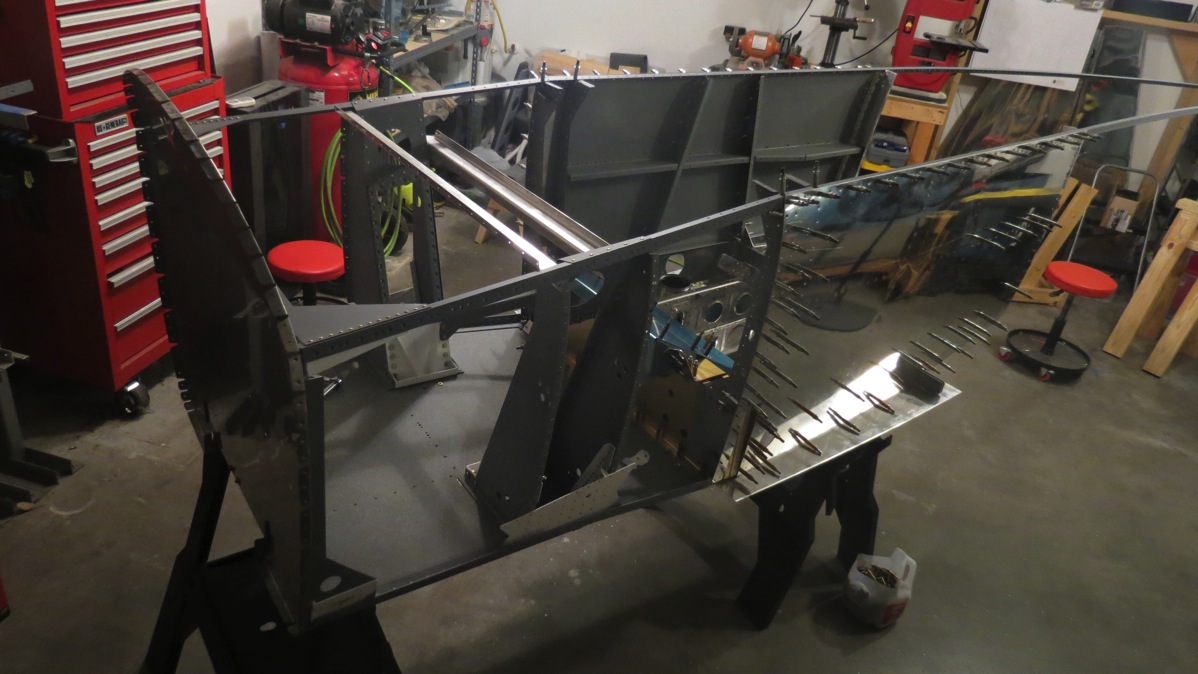 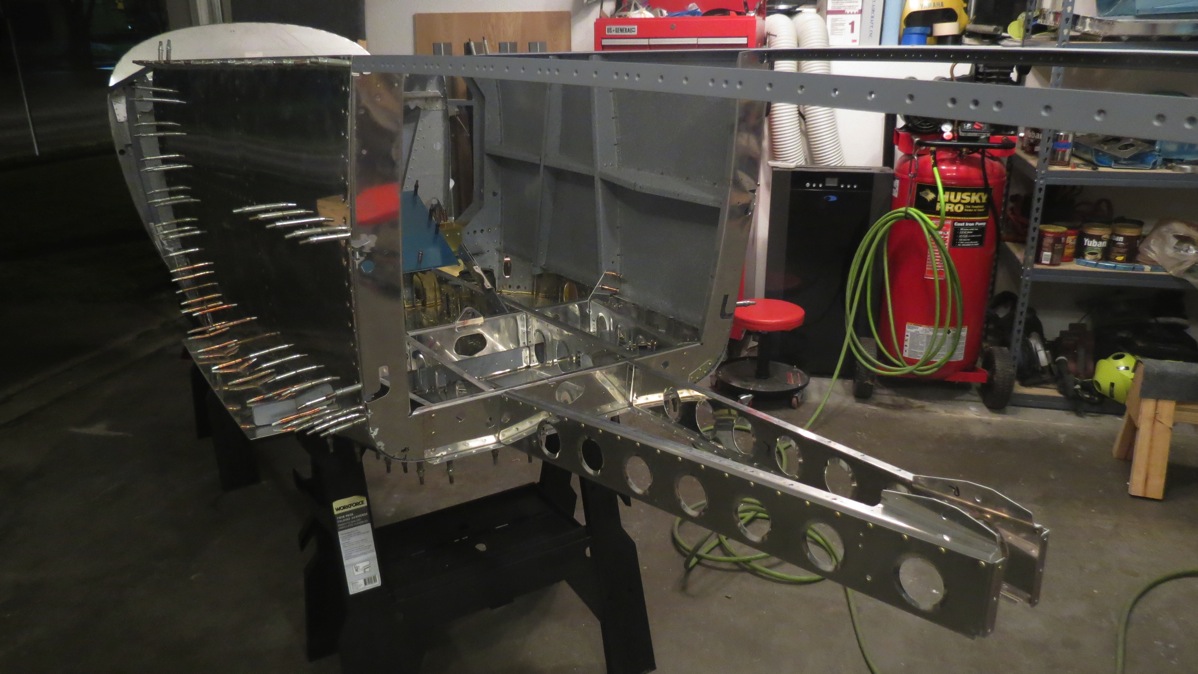