So my main goal for today was to get the mid side skins assembled with the arm rests and bulkheads, and maybe painted if time allowed – and time did in fact allow. Pretty productive day all around.

I actually started by finishing some work on the seat rib assembly. The outboard seat ribs needed to be riveted to the bottom skin – a fairly simple task, but made a bit awkward since I had to shoot from under the skin, and reach over the seat rib with the bucking bar. Not too horrible, though. Once those rivets were done, I had to move the cabin floor assembly outside, because I needed the workbench it was on for assembling and back riveting the mid side skins. Moving this thing is definitely a two-person job now, so I recruited Josie to help me out.

Looks kind of nice sitting out in the front yard, doesn’t it? 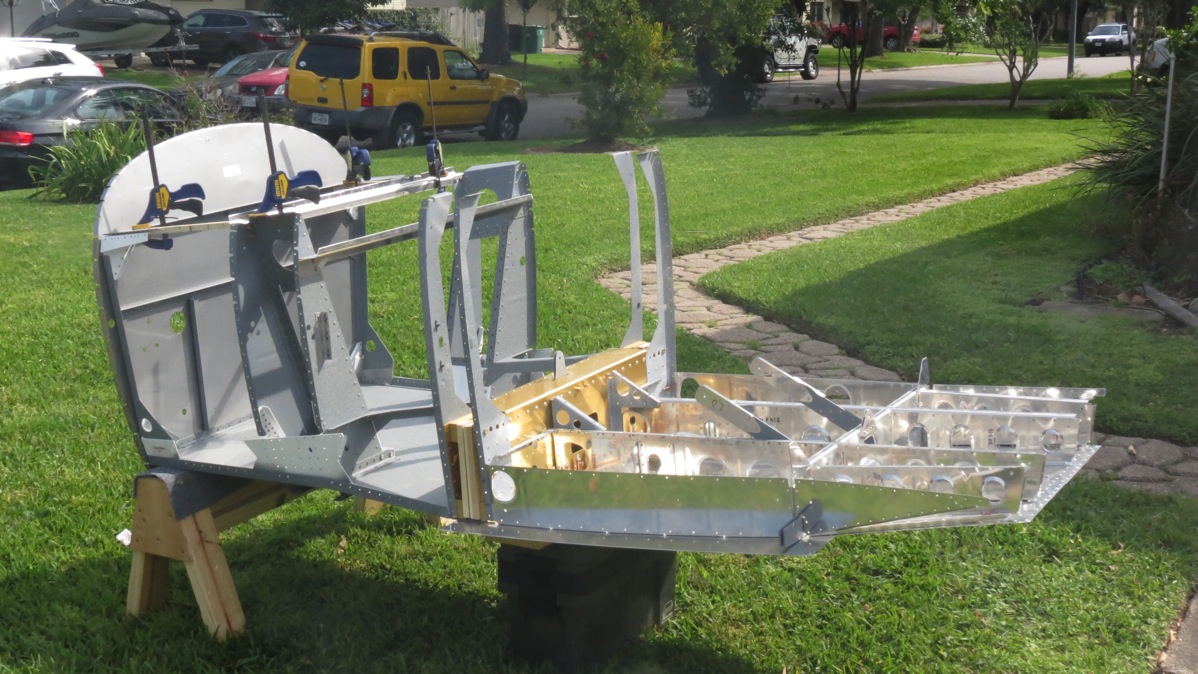 Next, I set about riveting together the armrest and bulkhead assemblies. Fairly simple stuff, but a touch awkward in a couple spots. These assemblies then get back riveted to the mid side skins, though curiously, the construction manual says not to back rivet the aft most armrest. Not really sure what the reason for that is, but I guess I’ll figure it out eventually. The back riveting was made a bit more interesting due to the mid side skins having a bit of curvature to them; I had to prop up one end of the skin at certain points to keep the portion I was riveting flat on the back rivet plate.

Even so, I got a bit sloppy. Here’s what it looks like when you have a rivet sitting right on the edge of the back rivet plate and you don’t know it: 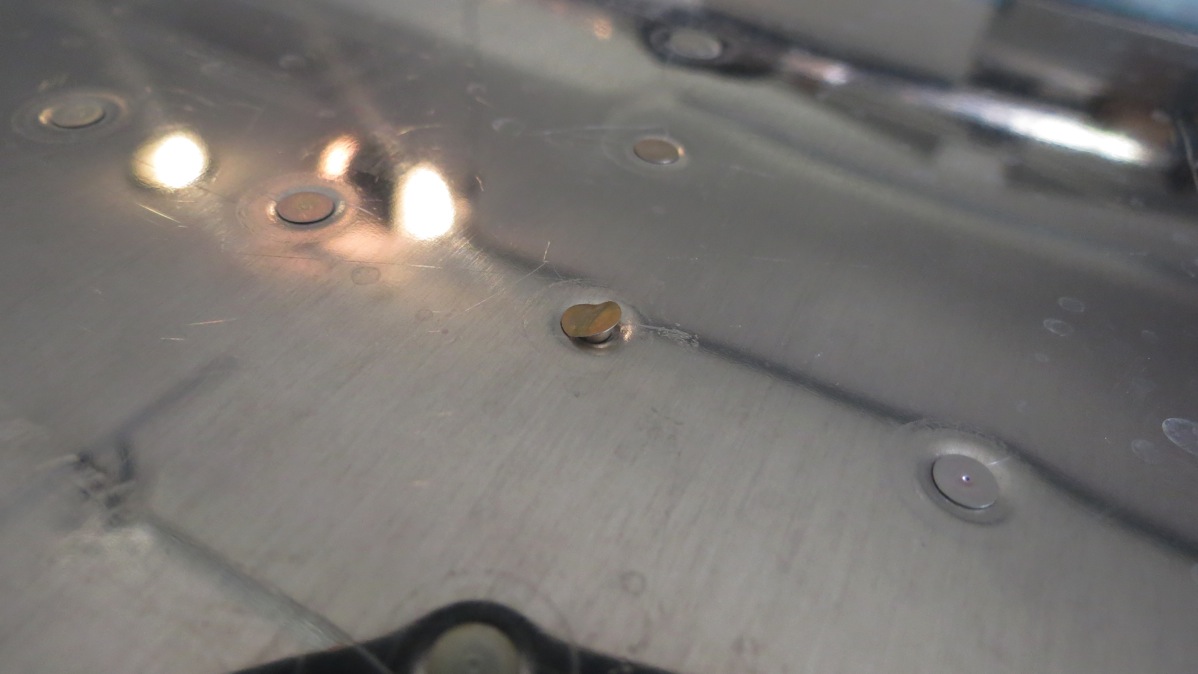 Drilling that mangled thing out was an interesting experience, but I managed somehow to not bugger up the hole.

Next, I shot paint on the inside of each mid side skin assembly. Here are the painted skins sitting out in the grass to dry: 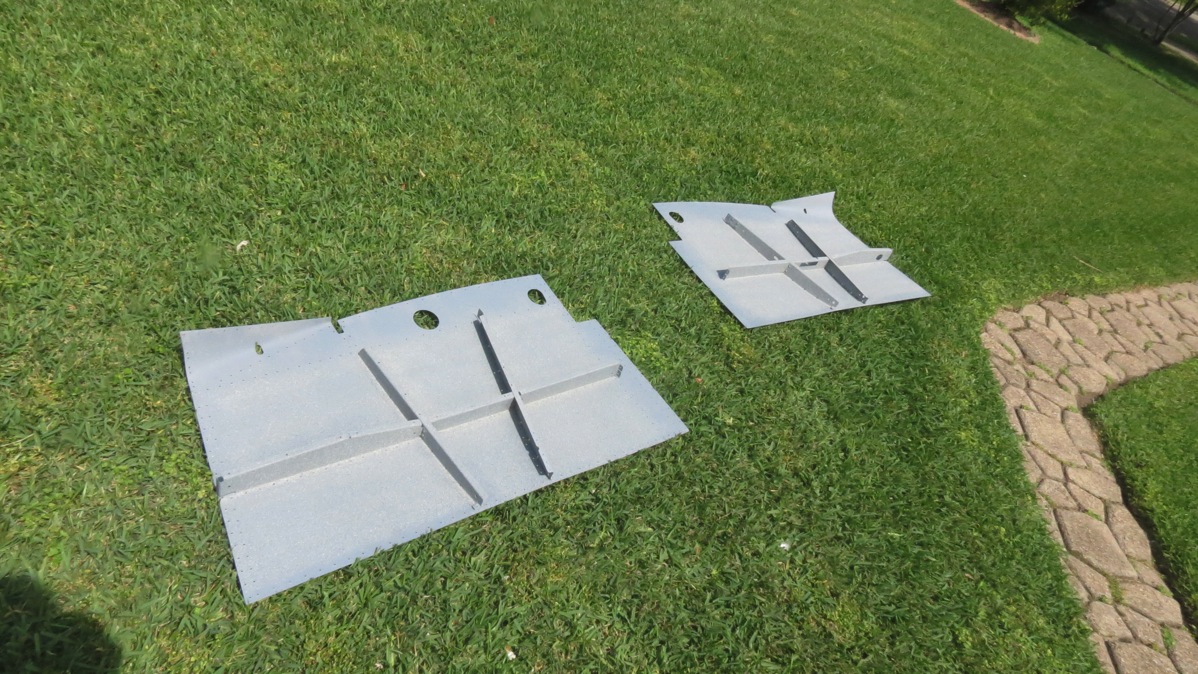 And that made it time to move the fuse assembly back into the garage. This time, I put two sawhorses out to support the assembly for the time being. I also decided to get a shot of the vacant garage, since this is the last time it’ll be this roomy out here for quite some time: 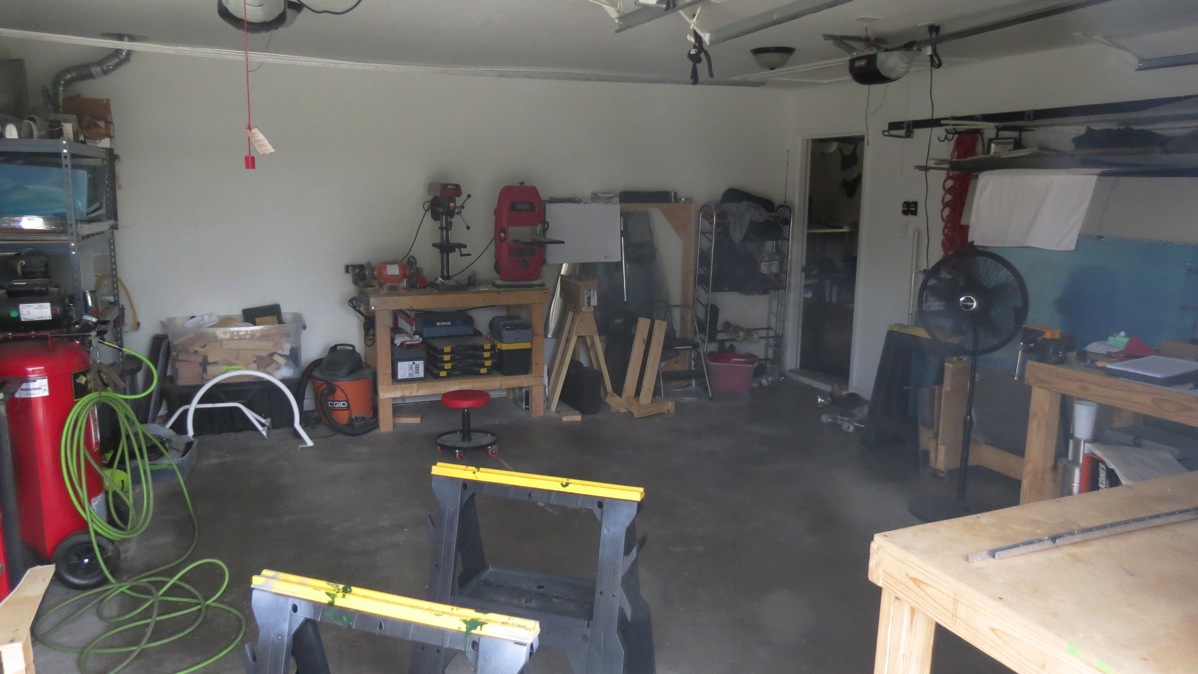 Once the fuselage was moved back inside, I started installing more parts. The instructions call for installing the upper longerons, center section plates, and the mid side skins. I did the former two, but then abruptly remembered the rear seat rudder pedal kit I was going to install. I wasn’t sure what was involved in installing that kit, but it seemed prudent to stop here and check that out before putting the mid side skins in place and thus restricting access  into the fuselage.

This turned out to be a good call. Two brackets need to be installed on each side for the pedals; an idler bracket that attaches to the base of the gear tower, and a guide bracket that attaches to the top of the center section. The idler bracket is easy enough; it just uses two existing bolt holes, but the guide brackets are more fun. They attach to the top of the center section and the side of the forward seat ramp angle, with two screws in each of those two pieces. Only one of these holes is preexisting; a screw hole that is also used by the mid-cabin cover plate. So there’s a lot of careful lining up of things here

It doesn’t help that the kit instructions are kind of vague. I did some research and apparently they date back to before the -8 kits were prepunched, so they’re a touch dated. It turns out that my center section is prepunched for the second nutplate after all; it’s just not obvious because the holes are only through one piece, and only visible from beneath: 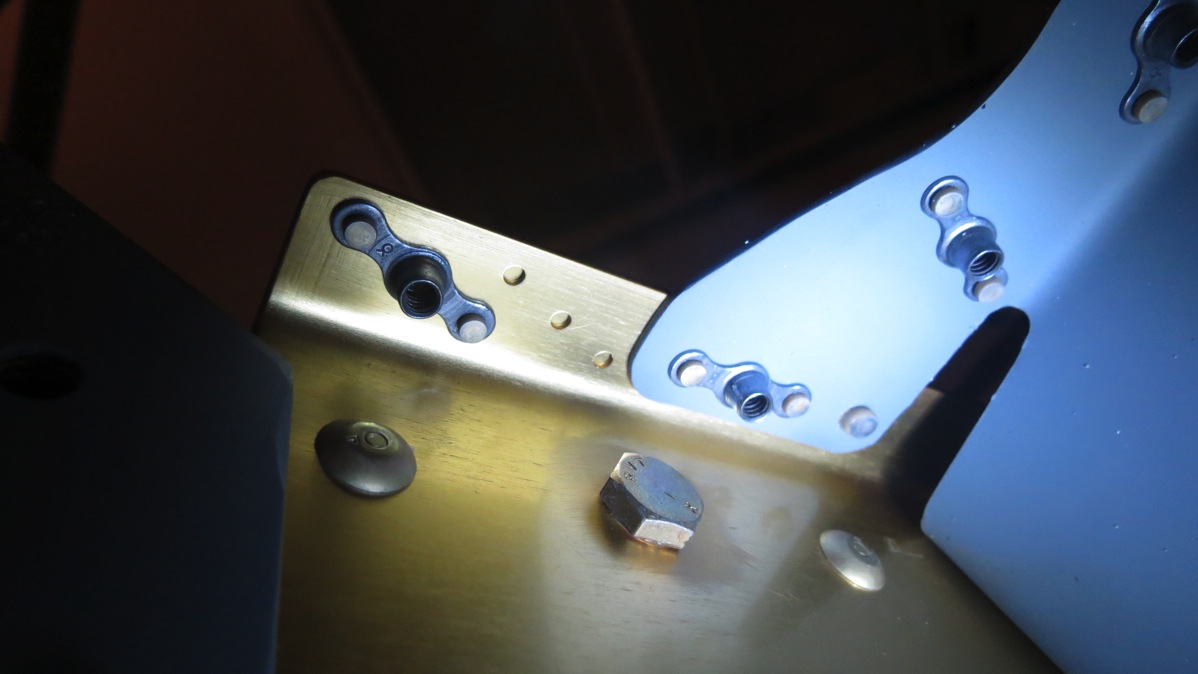 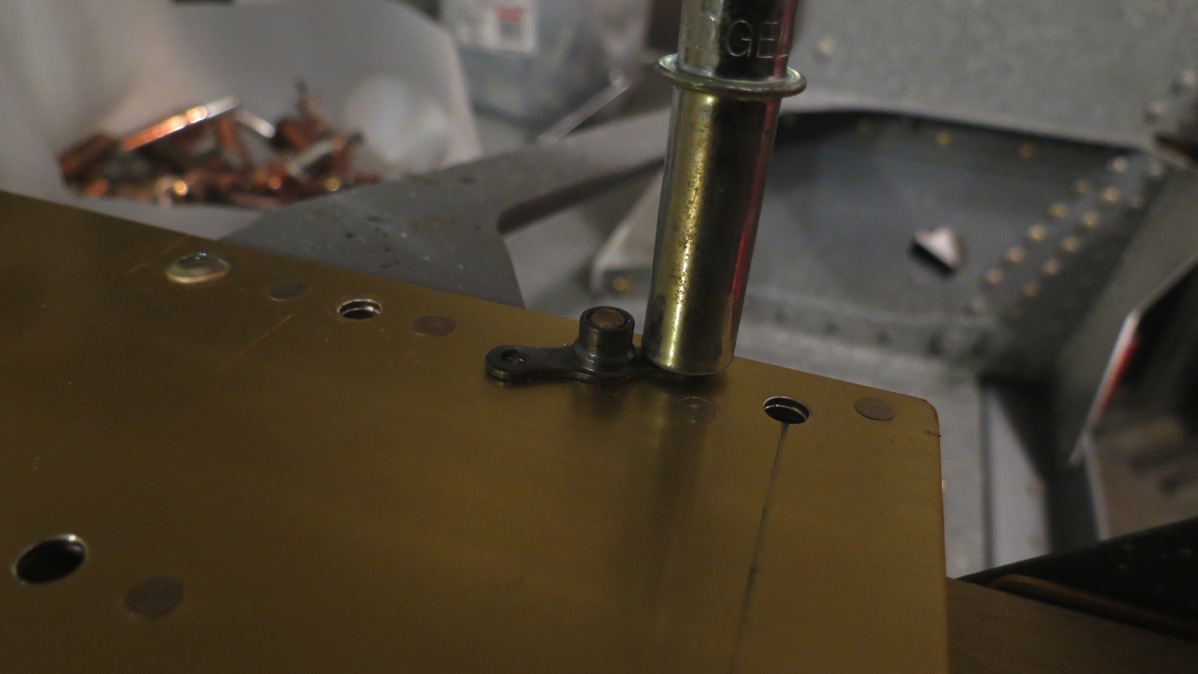 Next, I installed the two new nutplates. The plan from here was to clamp the guide brackets in place and drill through the nutplates from below, using a #30 bit, which fits nicely inside the #8 nutplate. Then I could drill the screw holes to final size on the drill press. Here’s the right bracket clamped in place, ready for drilling: 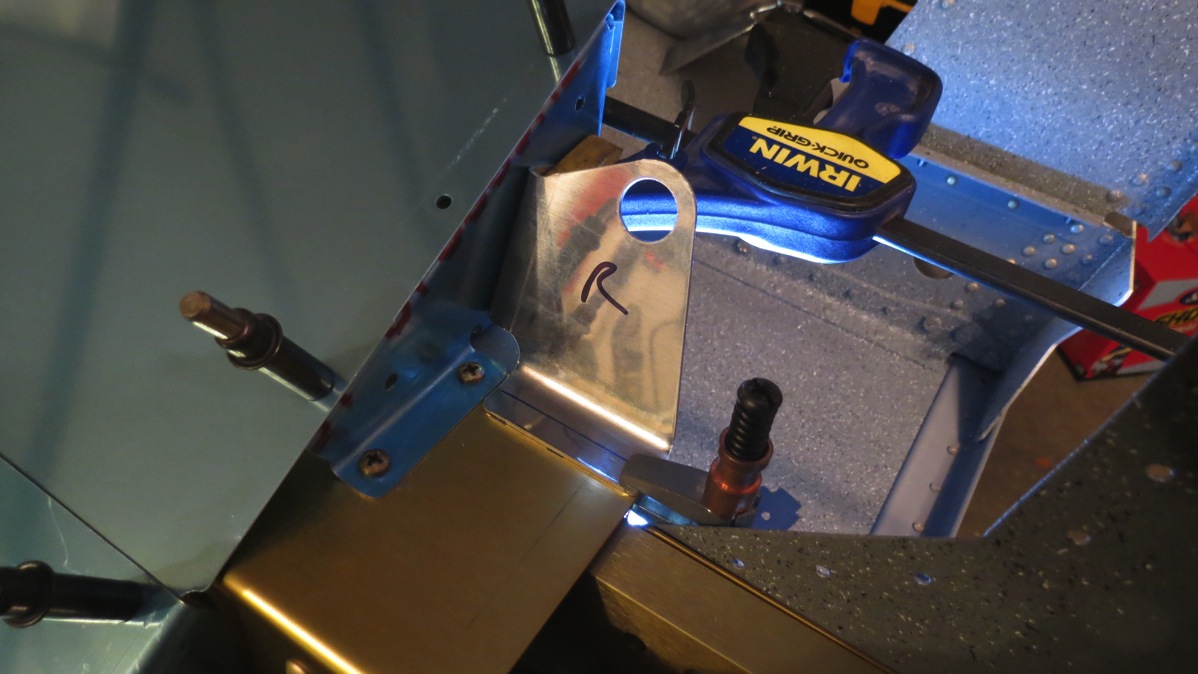 The drilling went as planned, and the brackets are now secured in place for me to pick back up tomorrow, when I intend to install the idler brackets and maybe at least mock up the rudder extensions. I imagine I’ll leave the guide brackets uninstalled for now, since they’re held in by screws.

Finally, here are a couple photos of the current assembly in the garage: 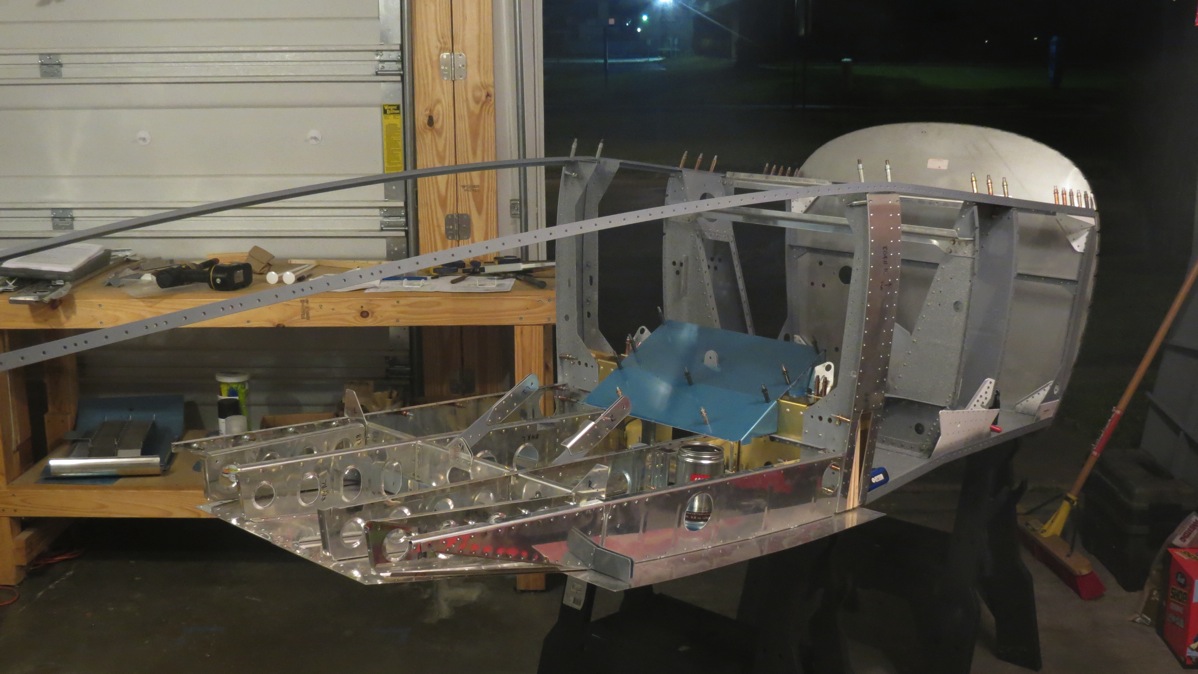 Note the aft end of the longerons dangling in thin air. I clecoed the aft most bulkhead in place, and put out my tall saw horse, just to keep these from banging into each other until I get to the tail cone. It also makes it a little less likely for me to walk into the longerons: 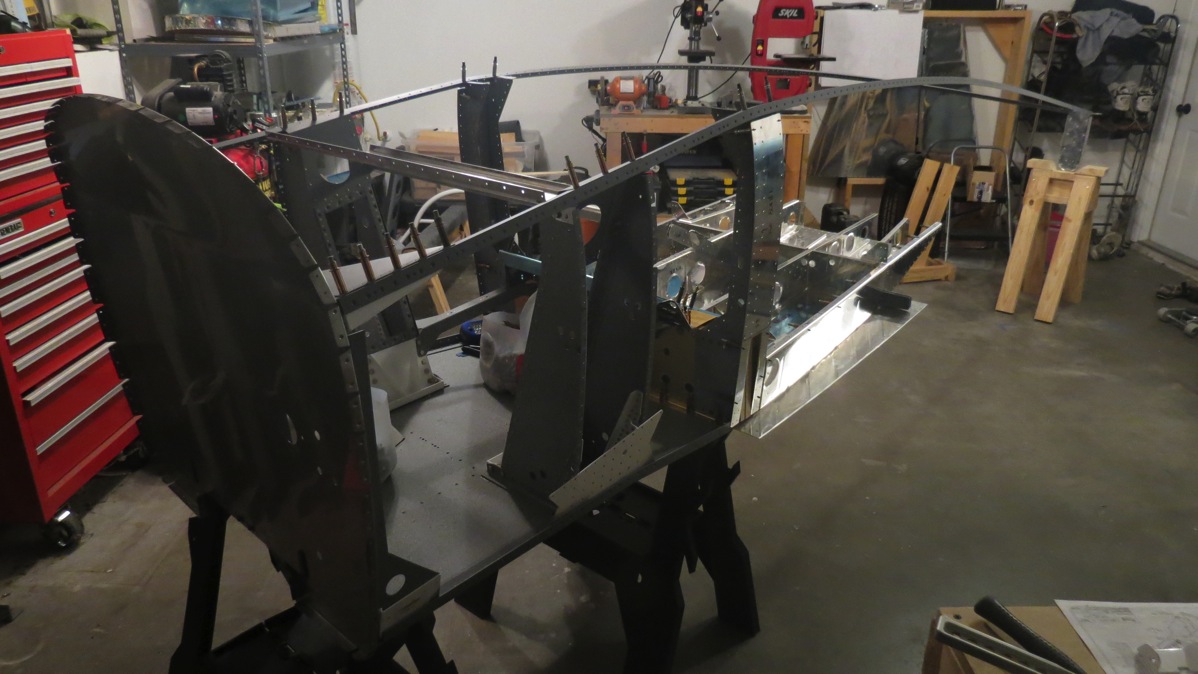 And that’s all for now!