Overall, a much more productive session tonight. I think I’m finally over the hump of all the throttle head-scratching now (famous last words…). I put in another Spruce order today for a pair of rod ends and some other associated hardware, for v2.0 of the throttle linkage.

One thing I did last night that I didn’t mention was a test run at tapping the ends of my linkage. The linkage is 1/4” steel tube, which will be cut to length, and then the ends will be drilled to size and tapped for 10-32 threads. Originally I was going to put threaded rod into each end for the (female) clevises to attach to, but with the new setup, the rod ends will thread directly into the linkage. Anyway, last night I cut off a short section of the tube, with the intent of seeing how the tapping worked out. Based on some quick Googling, it seemed that the proper drill size was #21, so I drilled the tubing using that, then went to town with the tap.

It went pretty horribly. It was almost impossible to turn the tap, to the extent that I was worried I was going to break the thing a couple times. I ended up with a mangled piece of tubing and something of a foul mood. Some further research turned up a more detailed chart, which called out different drill sizes for, say, aluminum vs. steel. Specifically, it called for a larger pilot hole for steel, perhaps to account for the harder material. According to this chart, #18 was the proper drill size.

So I started out tonight with some tapping experimentation. I had an extra little piece of 1/4” aluminum bar lying around, and I decided to drill three different hole sizes and try tapping them. For the first hole, I used the same #21 as before. I didn’t have a #18 drill bit on hand, so in its place I used a 11/64 bit, which is .024” larger. I did have a #17 reamer, so I used that for my third hole. (#17 is another .011” larger than 11/64) As expected, tapping the larger holes took much less effort than the #21, though none were especially difficult thanks to the soft aluminum.

Next, I wanted to get a ballpark idea of the relative strength of the threads. Presumably the downside of a larger hole would be reduced thread depth, and thus reduced strength. To test this, I decided to thread a bolt into each hole, snug it down, and then proceed to tighten it with the torque wrench until the threads failed. To be clear, this is in no way intended to be scientific or representative of real-world strength; I was just looking to compare the three holes relative to each other.

The results were quite interesting. The #17 hole gave up the ghost at only 30 in-lbs, while the 11/64 hole made it to 60 in-lbs and the #21 to 70 in-lbs. It would seem that that extra .011” from 11/64 to #17 makes a substantial difference. Based on these results – and keeping in mind that the steel rod should be significantly stronger, along with this being a fairly low-stress application – I believe that 11/64 is a perfectly acceptable pilot hole size here.

Here’s that aluminum test piece after I finished ruining the holes: 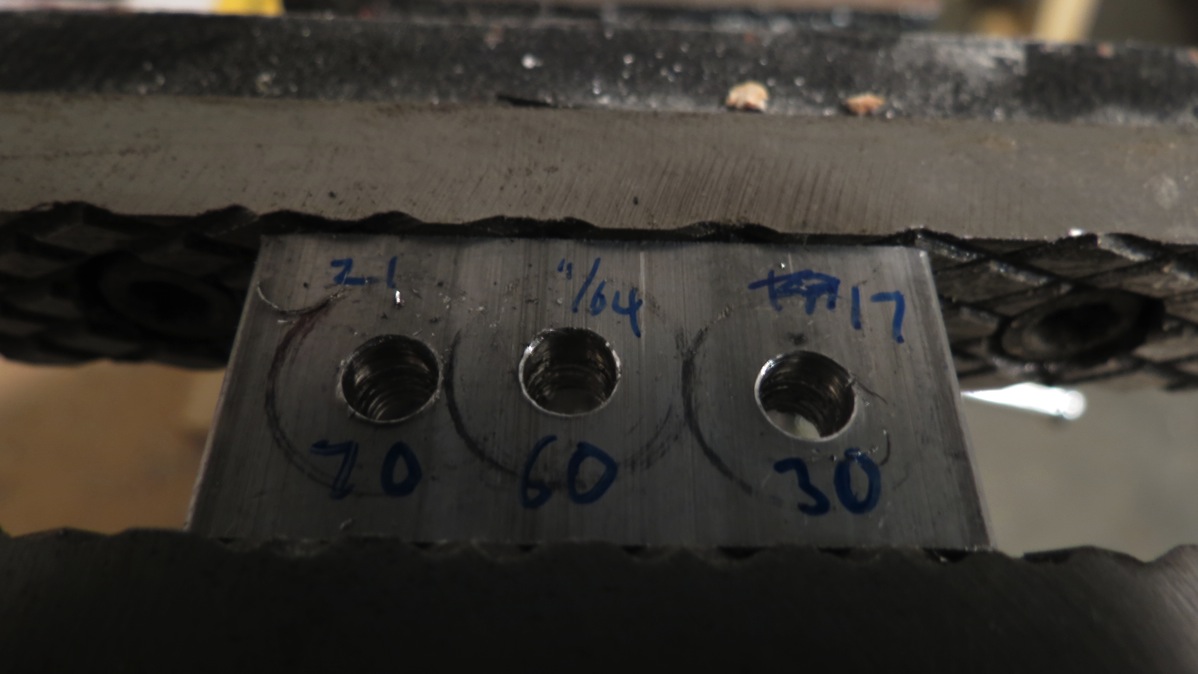 Next, I moved on to my favorite topic, trying to locate the bulkhead holes for the linkage. I decided to go ahead and lay out the holes; since I know the dimensions of the rod ends I ordered, I can determine where the linkage’s centerline will sit relative to the throttle arm (and by extension the side skin and other stuff) in the horizontal plane. I decided to use the rivet holes in the center section bulkhead to locate the linkage vertically; maintaining edge distance to those holes is the most important consideration. Since I’ll be drilling new holes in the throttle arms for the linkage anyway, I’m free to locate it vertically where it best suits me, and then drill the throttle arms to match later on.

So with all that in mind, and once again using my trick of clecoing some angle in place as a guide, I got my hole center locations laid out: 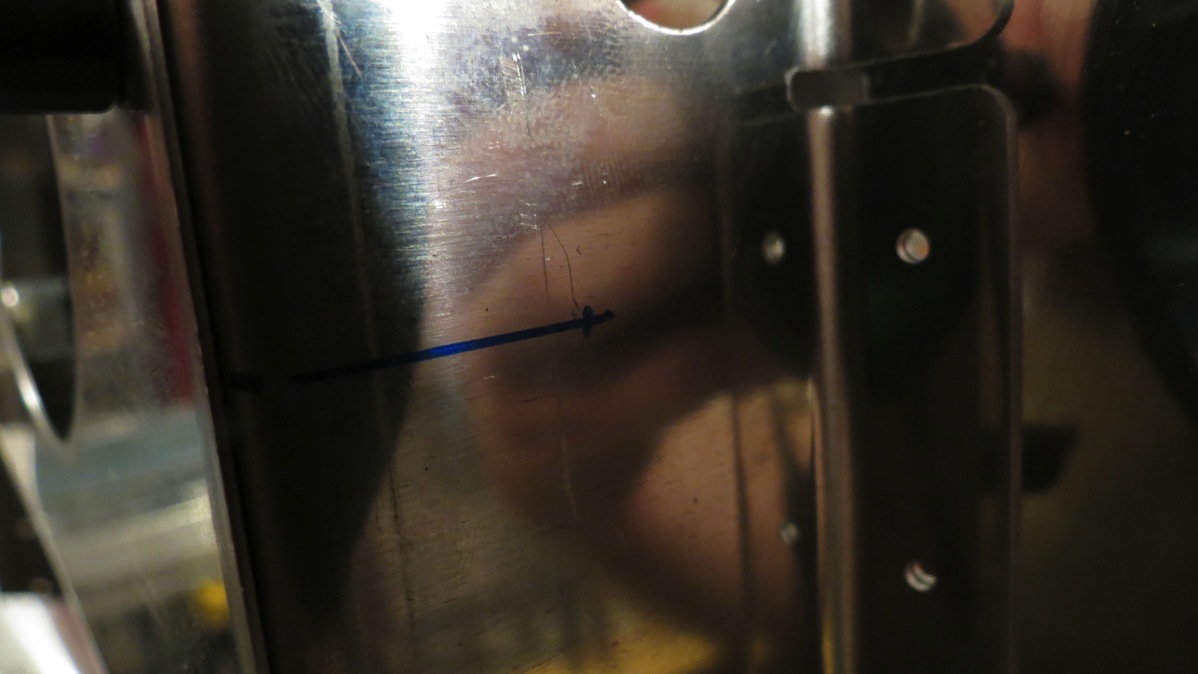 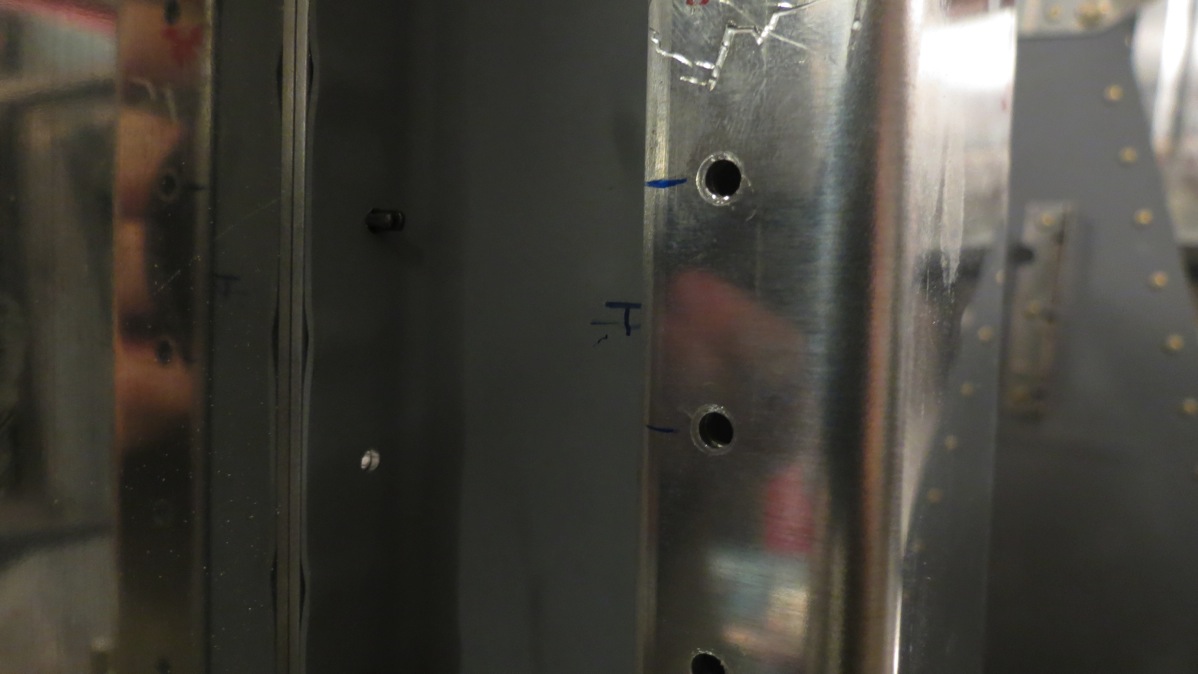 The second photo is of the center section bulkhead. Here I’ve clecoed the bulkhead cap in place to help evaluate the placement; I’ll definitely be needing to remove some material from the cap here for clearance. But even if I made a 1/2” hole on this center point (which would be a very generous size), I’d still have 5/8” edge distance to the rivet holes. I’ll need to be very careful here to make the passthrough hole only as large as necessary; I’d prefer a good margin over minimum edge distance in this location.

I briefly considered going ahead and drilling pilot holes in these locations, but I’m going to wait until I get the hardware from Spruce (hopefully on Saturday) just so I can double-check the dimensions of the rod ends. Considering how much time I’ve put into puzzling over this setup, it would be pretty dumb to get head of myself now and bugger up the whole works.

For a final task, I went ahead and fabricated a second mount plate for the rear throttle. Ever since I made the first one, the more I played with this setup, the more clear it became that my two large lightening holes weren’t going to be much help in proving access to the lever for rigging the linkage. Even with the lever full forward or back, it was mostly blocked by the web between the holes. So I decided to make a new plate with three lightening holes, where the central one would provide good access to the lever.

Fabrication went pretty quickly (I think it took about an hour) since I was able to use the first plate as a template. About the only unexpected development was that the first lightening hole I cut was larger than I wanted it to be by about 1/4” –  I guess there’s a little slop in my circle cutter. Fortunately, I cut the center hole first, so when I readjusted the cutter to make the other two holes smaller, the whole thing ended up looking nice and symmetrical. And now I really do have good access to the throttle lever: 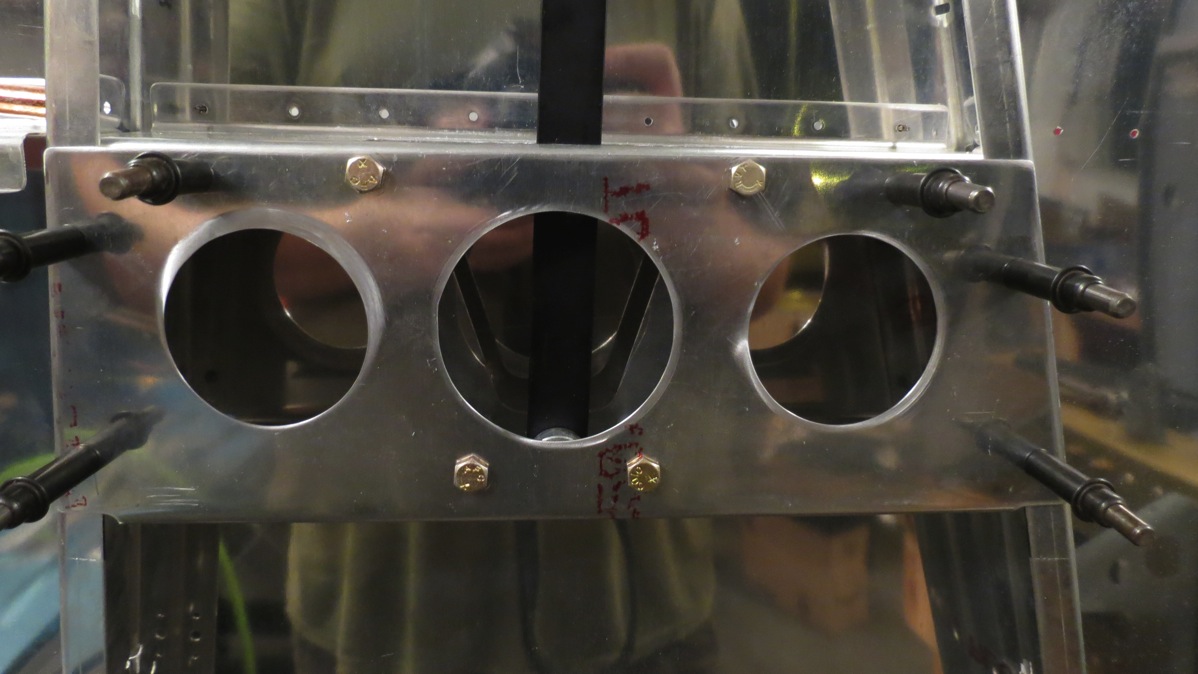 From here, I figure that once I get the hardware from Spruce and confirm the rod end dimensions, I’ll drill the pilot holes for the passthrough, mock up the linkage location, and use that to figure out how far inboard I need to move the forward throttle. Once the positioning of the forward throttle is nailed down, I can fabricate the top cover plate there and finally put this task to bed.