Again, not a lot done tonight. I wanted to at least get moving in the direction of hashing out the linkage between the front and rear throttles, but I ended up with more questions than answers when it was all said and done. It started off easily enough, with me bolting the front quad to its mounting bracket and then clecoing said bracket in place. Kind of cool to see: 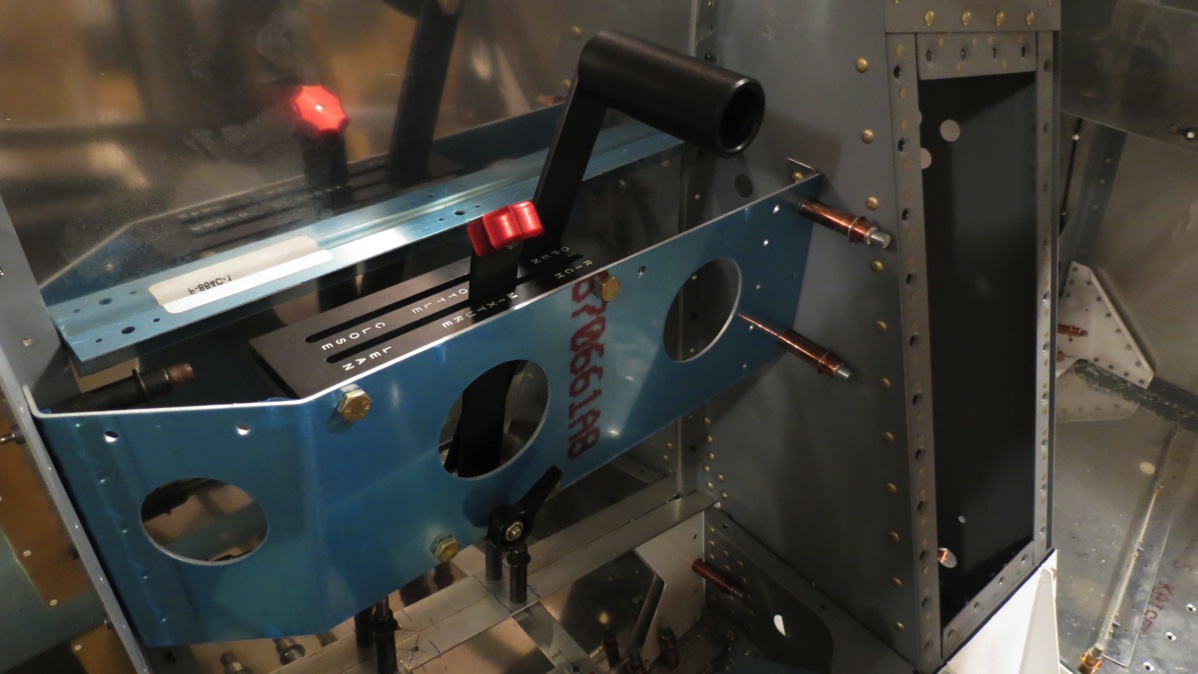 But this is where it got interesting. The linkage to the rear throttle must pass through both center section bulkheads, but with the throttle mounted as seen here, it appears the linkage would end up interfering with the rivets along the edge of the bulkheads where the bulkhead caps attach. I think part of the problem is this two-lever quadrant. Obviously a three-lever quad would be wider, and the top quadrant cover (not pictured above) seems to be cut with that in mind. The takeaway is that with a three-lever quad, the throttle would be located probably 1/2-3/4” further outboard, and the issue with the linkage interfering with the rivet line wouldn’t be such an issue.

I’ll need to do some research before committing, but my current tentative plan is to add spacers to the inboard side of the throttle, to locate it in the “normal” position further outboard. I’ll definitely be needing to fabricate my own top cover for things to look nice here, but that was always going to be needed with this narrow quadrant anyway.

The other contributing issue is that I want to see about mounting the rear throttle, but I’m either missing a part, or that part isn’t in the fuselage kit, which I’d find bizarre. Basically, it’s a cover plate that mounts below the rear armrest, and the rear throttle bolts to it just like the front one bolts to the front mount. There’s clearly supposed to be a plate there, as the surrounding bulkheads have prepunch holes for nutplates, and I’ve seen plenty of photos of finished aircraft with this plate in place. But I don’t see it depicted anywhere on the plans, so I don’t know what the part number is, and nowhere in my parts stash do I see anything that looks like this piece.

So basically, I’m pretty confused right now. I guess I’ll ask around at VAF about the part number, and try to figure out from there if it’s missing or what.

UPDATE: I was just looking through the electronic copy of the all the plans I had and found a drawing for doing the rear throttle, which includes the part number. I gather you only get this piece if you order the rear throttle kit from Van’s. Guess it’s time for another order…