Just…wow. It’s in the nature of any large project that some things takes far less time than you expect, while others take far more time. Today definitely fell into the latter category. It’s been a light week for the project, but I haven’t been completely slacking – I bought and installed insulation kits for both garage doors, in the hopes of making the garage far more livable. It seemed to work fairly well today – it was still warm out there but better than before.

Anyway, today I kept going with the tailcone fitting. Last time out I’d quit in the middle of trying to attach an assembly of the aft bottom skin and the two aft most bulkheads. Today, I noticed that the bulkheads didn’t fit into the bottom skin very well, so I started by taking care of that problem. A number of the bulkhead flanges needed to be tweaked to fit tightly against the skin: 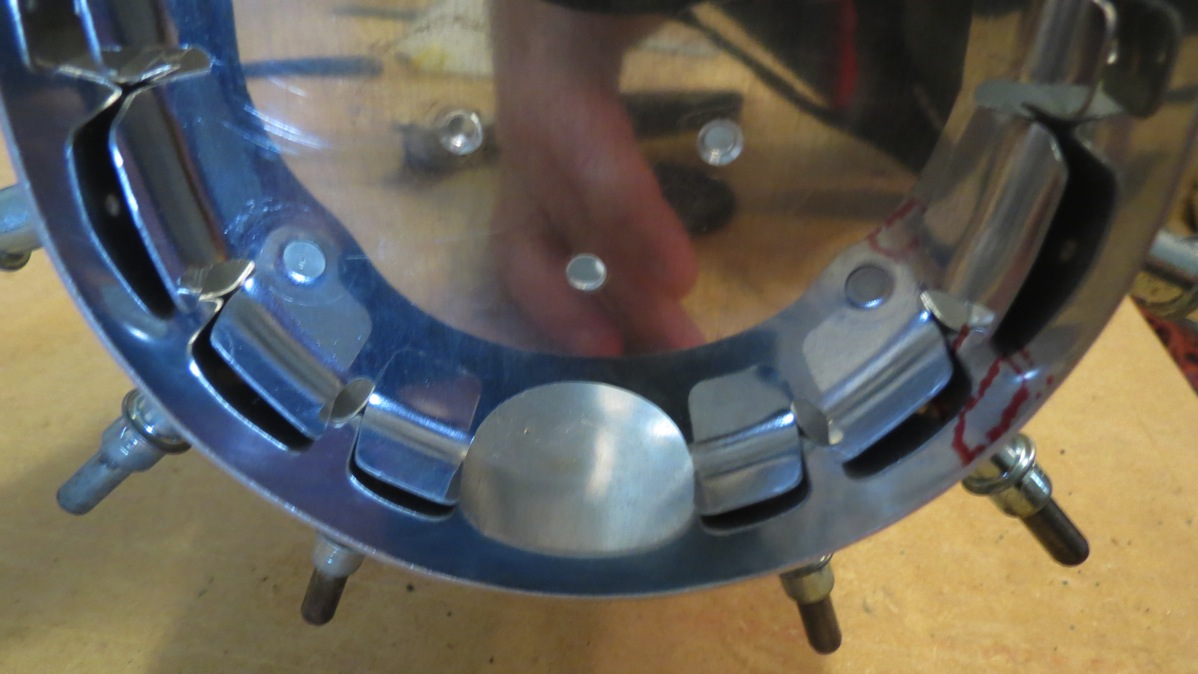 This is the whole assembly I’m working with here. The skin itself is quite thick, which just makes fitting this that much more fun: 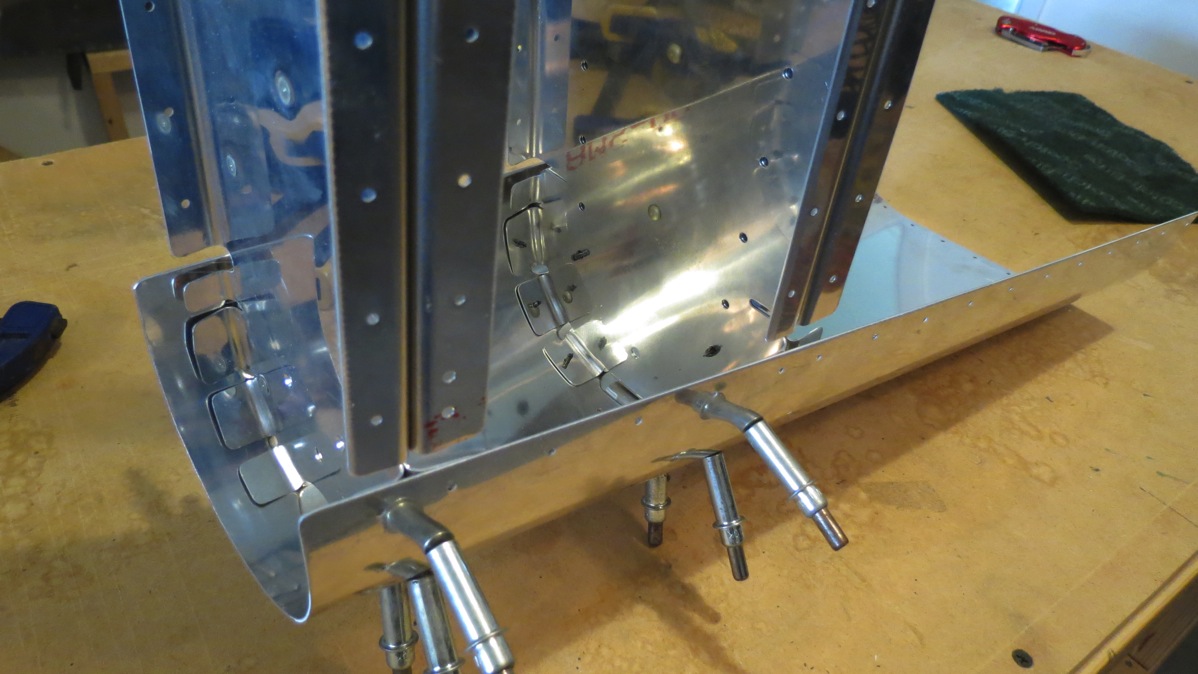 In addition to tweaking those flanges, I massaged the skin itself a bit to tighten the curve. That made it a lot easier to cleco the bulkheads in place, which was good, because I removed and replaced them a couple times while tweaking the flanges. Finally I got that done, and I found that the assembly was much easier to cleco in place on the tailcone.

It was the next task that ended up eating a large portion of my day. The final remaining piece in the tailcone assembly is the larger aft bottom skin; this covers the rest of the lower tailcone, from the center fuselage to the other assembly I was working on. So already, this is a large cumbersome piece. To make matters more fun, it has to fit into a very tight space. Already, at the aft end of the center fuselage, we have the bulkhead, the bottom skins, and the side skins, which have a bend around the lower fuse corner that fits tightly as-is. And now the aft bottom skin has to slide between those skins and the bulkhead.

Getting this done required help from Josie, plus some creative use of boxes to support the aft end of the skin: 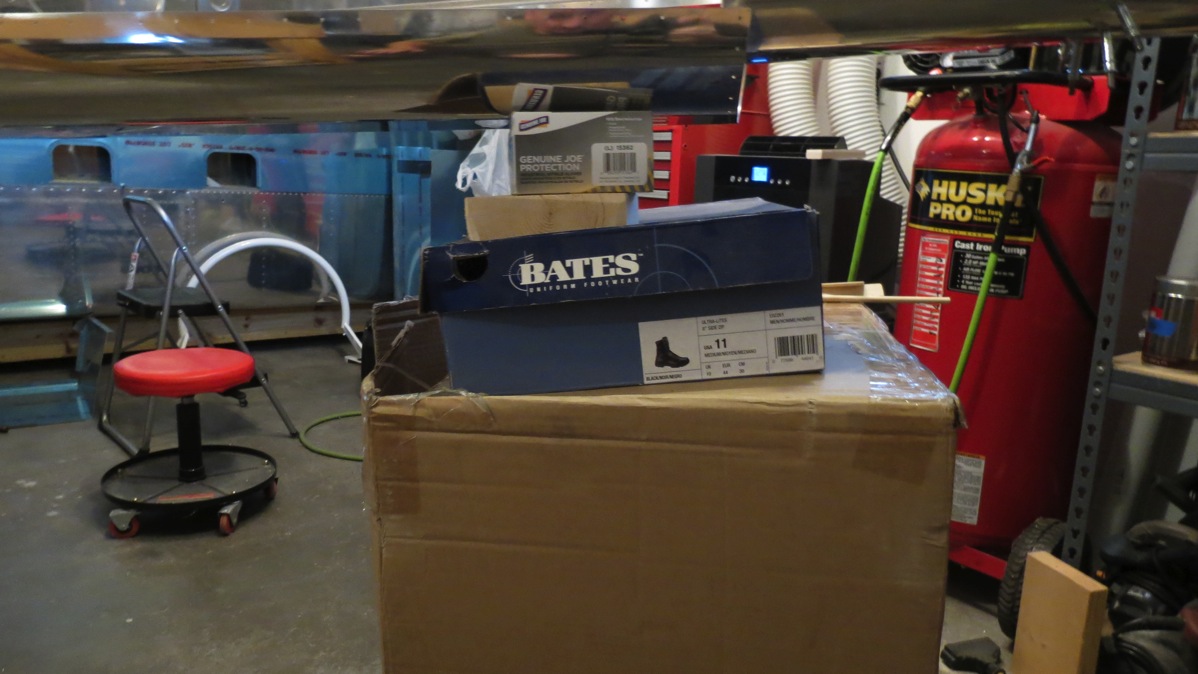 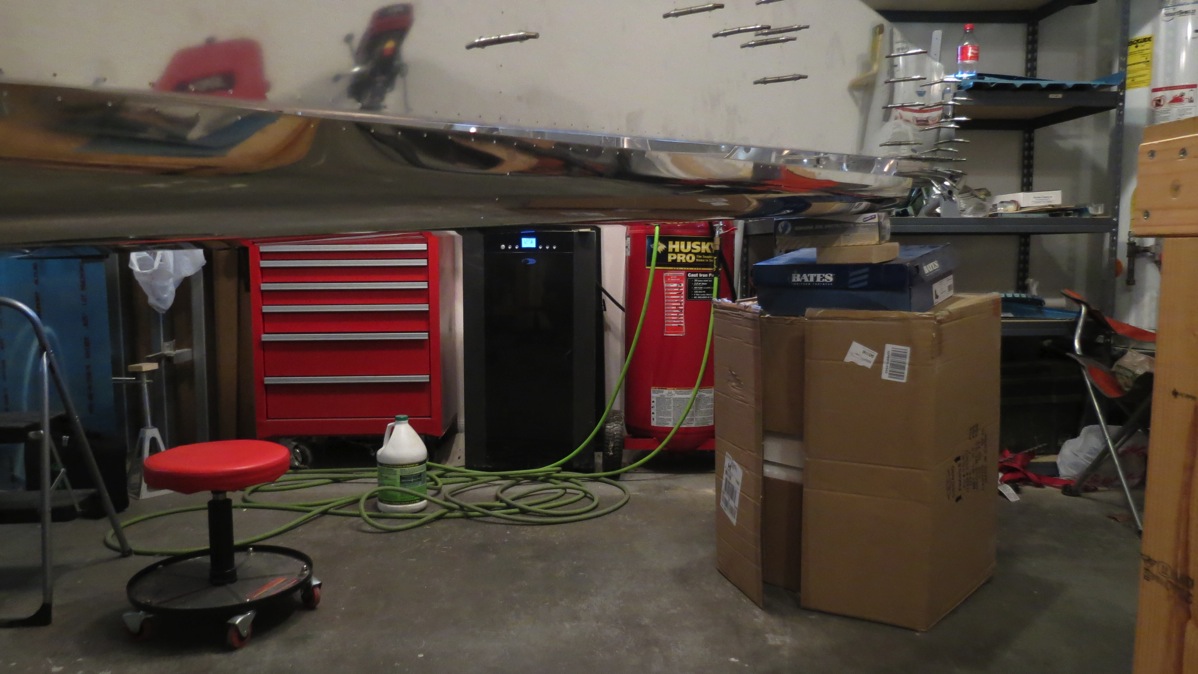 We spent the better part of an hour just trying to wrestle this thing vaguely into position. Finally, I was able to get a cleco at the forward end of the skin on the left side, but I could not for the life of me get the right side to slide into place inside the side skin. It would just barely get started and then stop and refuse to move at all. Eventually I figured out that the side skin fits so tightly there that the aft bottom skin was catching on the bulkhead corner and pushing it forward. Some creative work with a long dowel and a hammer removed the distortion from the bulkhead and allowed the skin to slide a little further in…in the process, distorting the bulkhead again. It took a couple more iterations like this to get the skin in vaguely the right place. Actually, we ended up with the skin too far in, which caused way more trouble than it had any right to.

Here I am “gently massaging” that bulkhead to help the skin go in: 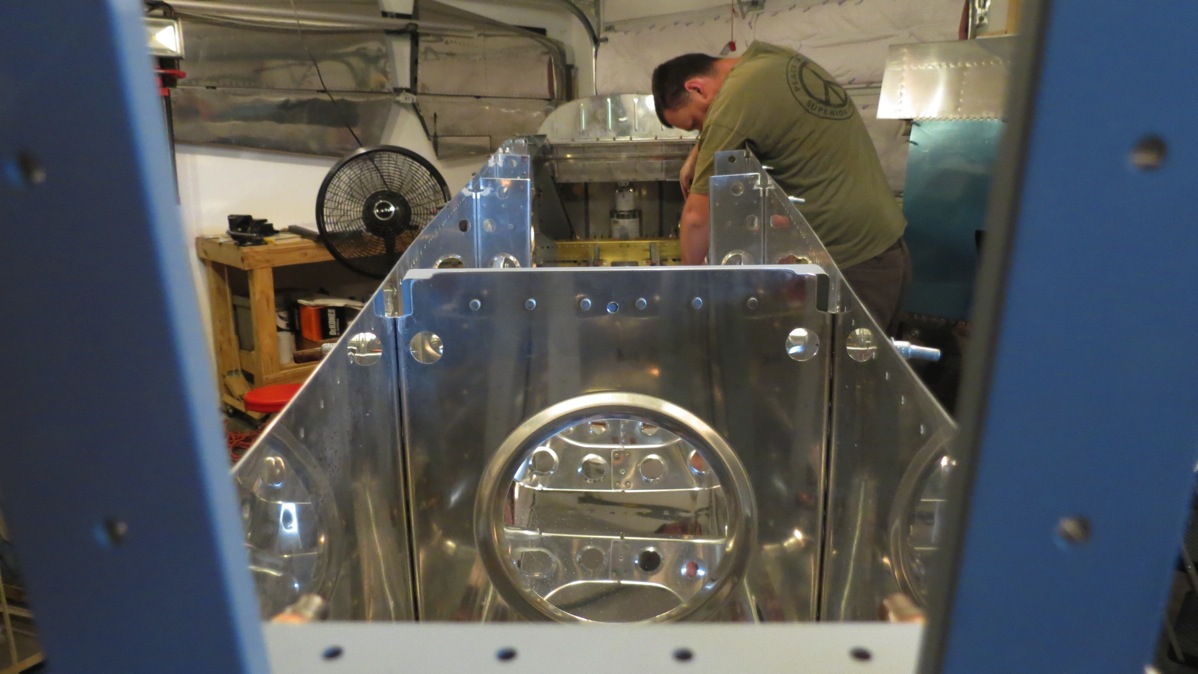 Clecoing the thing in place was a battle too. Everything seems to not quite line up perfectly, which means getting clecos into the holes is a ton of work. Here I am trying to beat this thing into submission while the dogs look on: 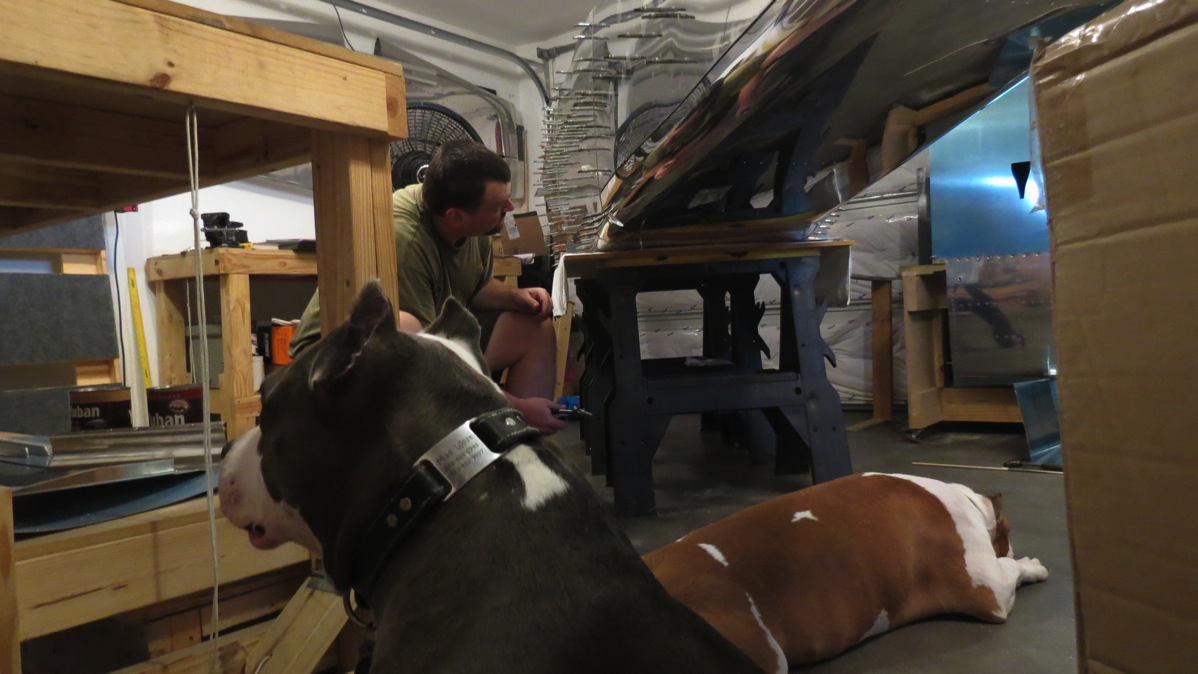 It all seemed to be going decently until I tried working on the right side. I’d figured that maybe clecoing the left side would help move the right side into proper alignment, but that didn’t happen. I tried about five different things to slide the skin backward again; the result of these was an unmoved skin and a rapidly escalating temper. (At one point I opined that this thing had better be a lot of fun to fly)

Finally, I was able to get the skin into proper alignment by once again using the hammer and some scrap wood to bang on the end of the lower rear longeron and drift the skin aft a bit. Even then, clecoing that skin to the right aft side skin was a battle. I got about 2/3 of the way through that and just decided I’d had enough.

The best part is that I’ll have to do this at least one more time, after match drilling and dimpling. And I’m sure it’ll be even more fun with dimples in place…