Whew. Working in the garage in this heat is taxing. I really don’t think I’m going to be doing much – if any – work out there in the evenings this week. Forecast highs are in the low 100s every day this week.

Anyway, with the tailcone bulkheads all set, today I started prepping other parts for that area. First up were the baggage floor ribs and angles; these just needed to be deburred and match drilled with each other. Next up were the back seat lap belt brackets. I got the main heavy bracket pieces trimmed, deburred and primed with no trouble, then came back later and riveted the assemblies together: 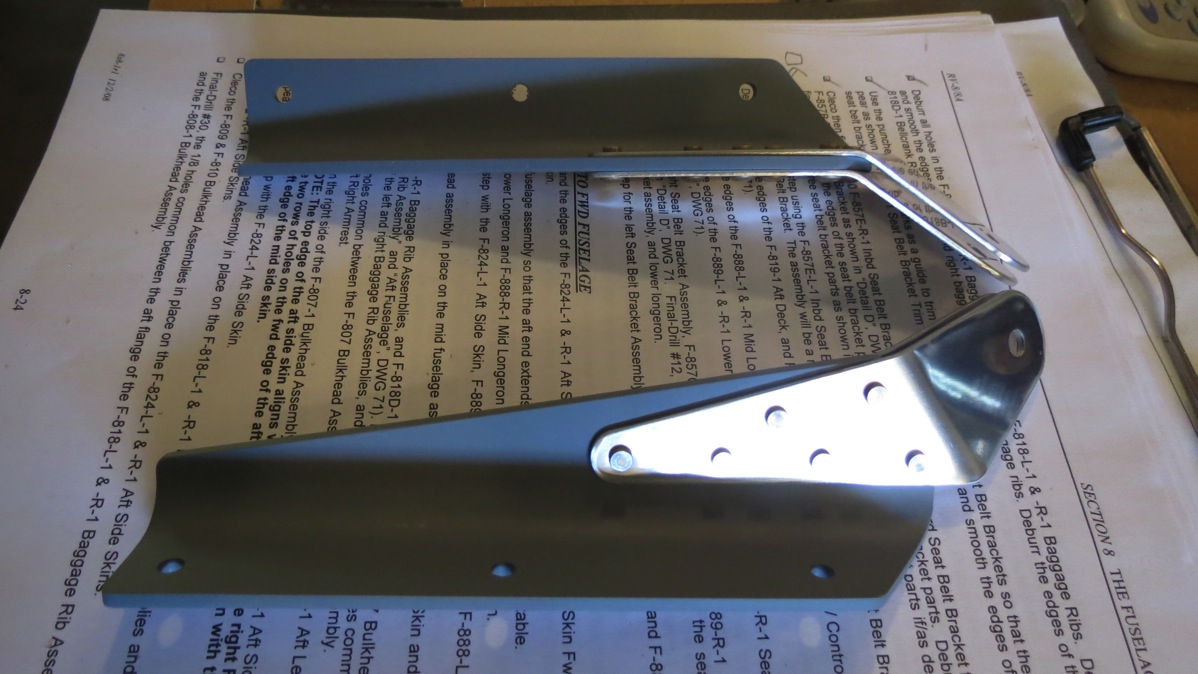 There was a lot of other deburring work as well. The aft deck piece, a couple of small spacer pieces, and best of all, the aft longerons. There are two pairs here; the lower longerons run the entire distance from just behind the back seat to the rearmost bulkhead, while the mid longerons just run about halfway to the tail. These are heavy angle and that, combined with their length, makes it a tedious job to get them deburred. But finally, they were done and set aside, and it was time to start assembling the tail cone itself.

For some reason, I was under the impression the tailcone would be constructed on the bench and then joined to the forward/mid fuse assembly, but instead the pieces are assembled individually in place. First up is the baggage rib/angle assembly. The instructions refer to the “rib assemblies,” which makes me wonder if I’m supposed to have riveted the angles to the ribs yet. But I looked back and at no point did it say to do that, so I’m leaving them clecoed for now. If I get to a point where the cloches are a problem, I’ll look ahead and see if there’s any reason not to rivet.

Anyway, here are the baggage ribs in place. This gives a general idea of the size of the rear baggage compartment. Honestly it’s larger than I was expecting; I figured it would be little cubby suitable for a couple day packs at best, but it’s about 3’ deep and could probably accommodate some duffel bags and light camping gear, assuming weight wasn’t an issue. I forget the baggage floor weight limit… 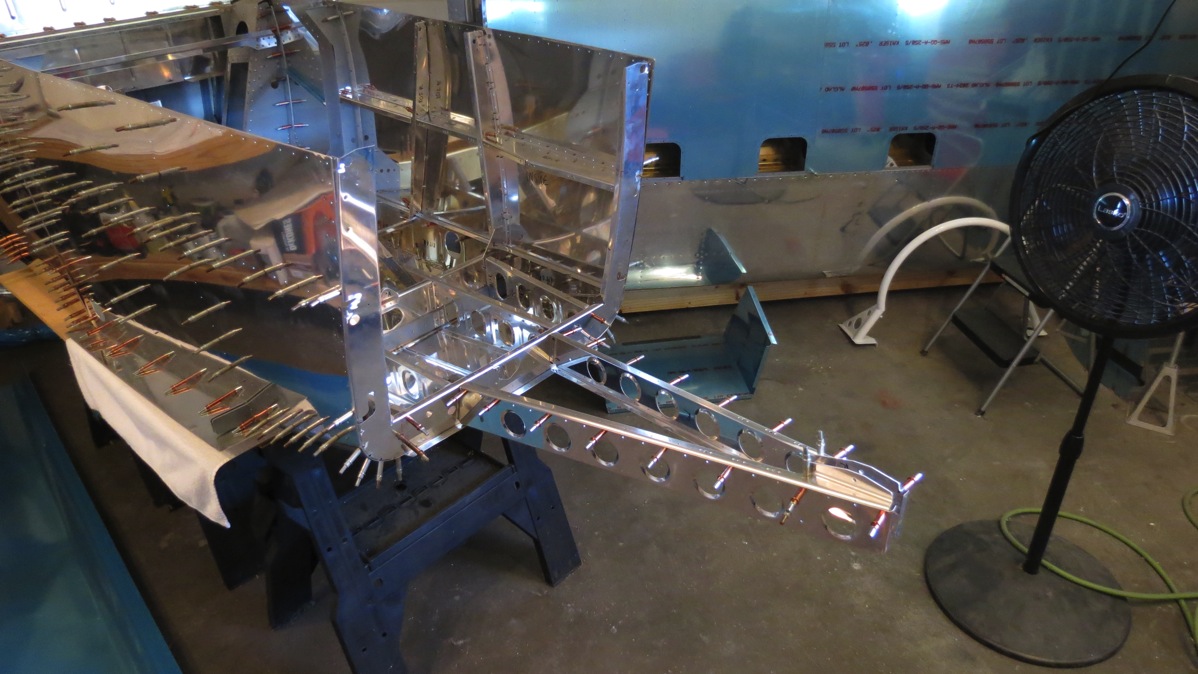 Next up, each of the aft side skins gets its edges deburred – again, a sort of tedious process just because they’re friggin huge. Once each skin is deburred, the two longerons are clecoed in place, making a nice little semi-sturdy assembly. Then the two assemblies are mated to the back of the cabin area. This is definitely a two-person job: one to hold the aft end of the skin while the other clecos the forward end. Then the tailcone bulkheads are added, giving everything a little bit of structure. Also, the garage is now much more difficult to navigate: 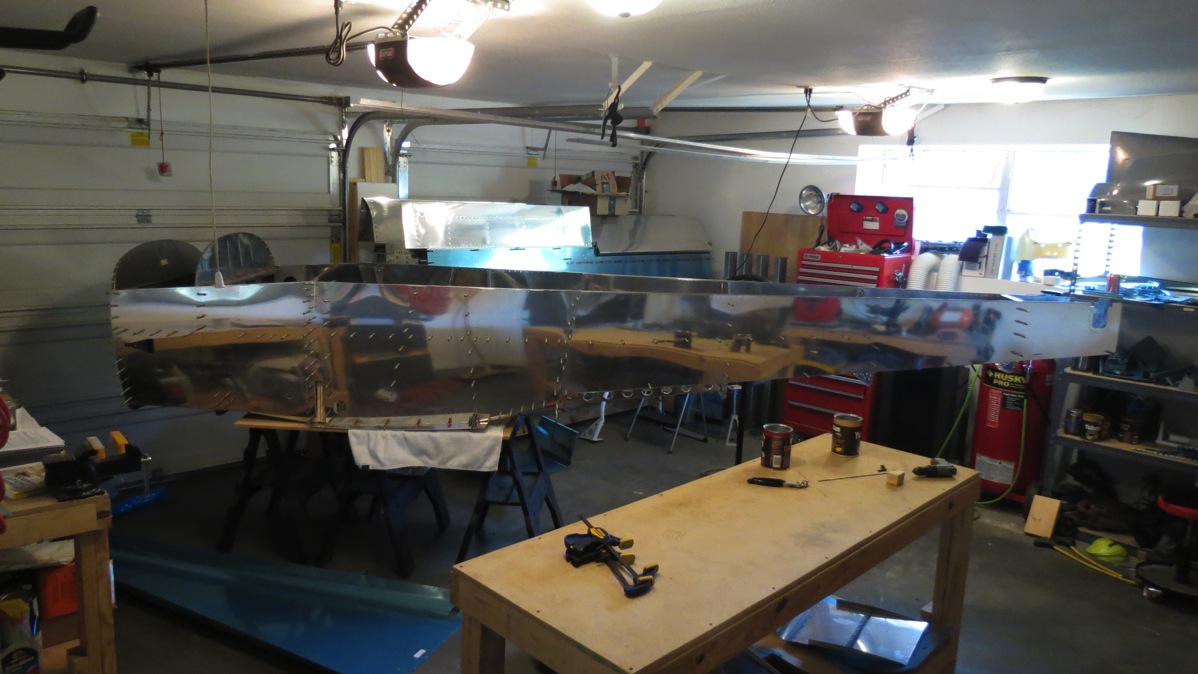 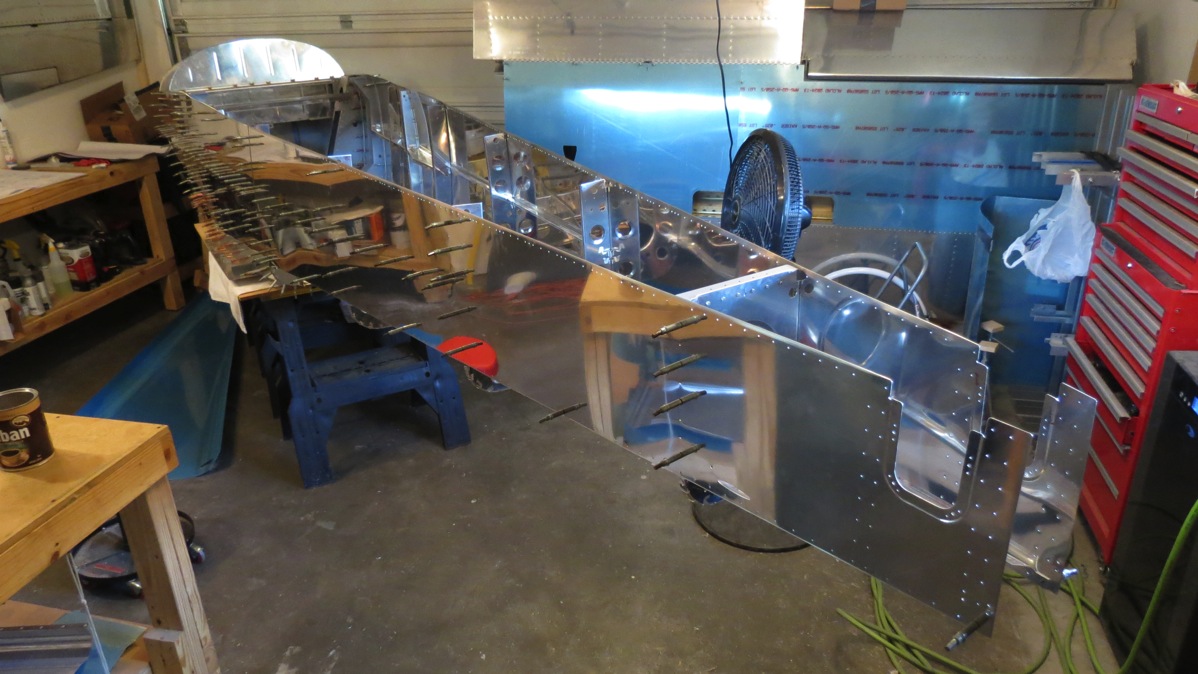 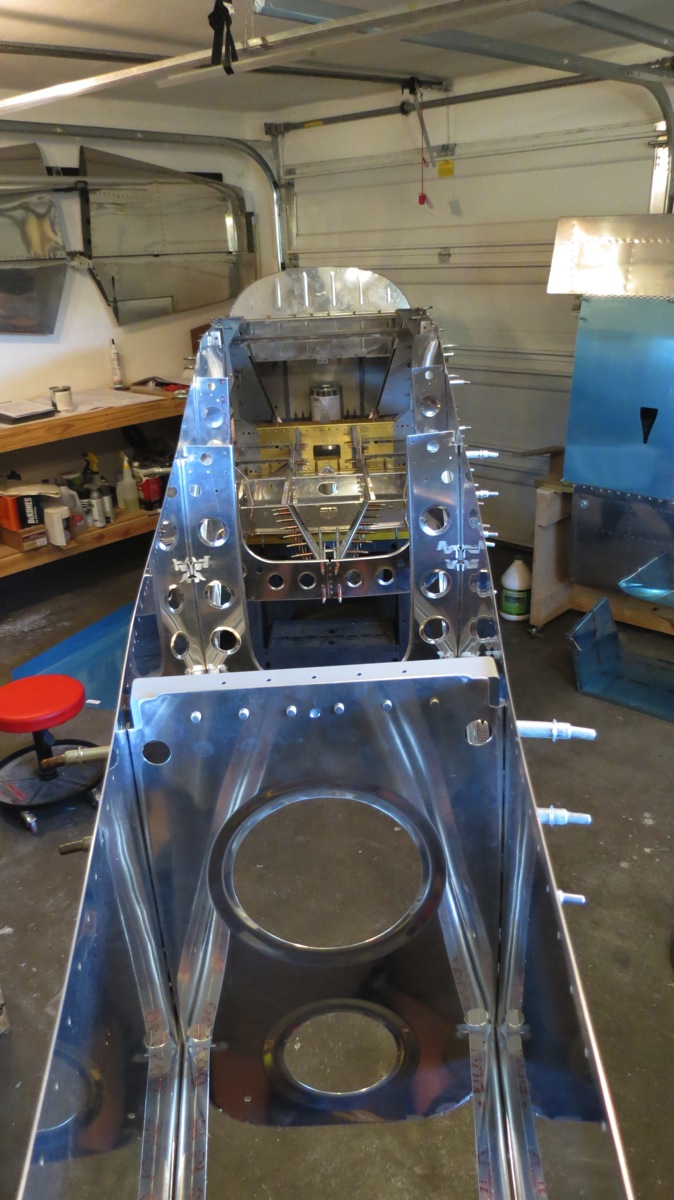 I’d hoped to not have to do any garage rearranging on the near term, but I think I’m going to have to. There’s barely room to get out the garage door, or to walk around behind the tail. And with the fuse assembly sitting on sawhorse, it can’t be easily moved either. I may end up building some kind of rolling cart for this assembly, but even then moving the assembly without damaging anything is going to be a challenge. And it’ll be even more fun when I have the engine hung…guess I’ll just figure that out when the time comes.

I worked a little more after this, trying to assemble the two aft most bulkheads with the small aft bottom skin, but got frustrated. That skin is heavyweight, presumably because it has to support the tailwheel. Getting it to fit to the bulkheads was tough, but I got it done, Then I tried to fit that assembly to the tailcone, and it was just not going well. It was getting late anyway, I was getting tired, and I felt like I was on the verge of getting carried away and breaking something. Better to wait tip another day.

Shame it’s going to be so hot this week. I’m making good progress and I’d like to keep going, but it’s just really unpleasant out there. The air conditioner out there just can’t keep up.