So after disassembling the stuff I stuck together for fun last night, I started moving on along with the seat ribs. First task was to fabricate a couple of angle supports. The instructions say to use .063 3/4”x34” angle to make these. I dug through all my angle stock about three or four times and never could find any of that stuff. Finally, I went inside and consulted VAF. Turns out that I did have some of this angle stock – it’s the stuff I have for the longerons. Van’s recommends using two separate pieces of the 12’ angle for this, cutting one angle bit from each. This makes it less likely that, down the road, I discover that I cut something too sort. Shipping a 12’ piece of angle probably is far from cheap.

Anyway, that made for fun times. Fortunately, my bandsaw lines up well with the door into the house, enabling me to cut these piece that way. I recruited Josie to stand in the kitchen holding one end of each angle while I ran the bandsaw for the cut. The rest was straightforward from there: 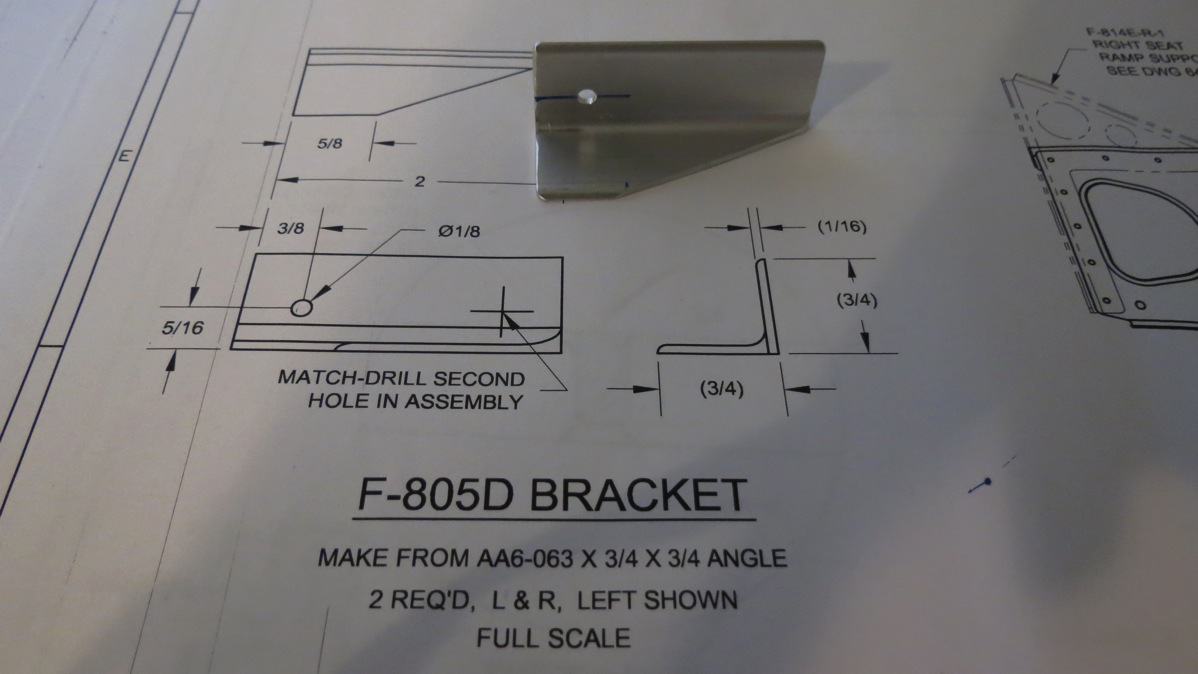 Next, the long support angles, those little angle bits, and the seat belt mount assemblies get clecoed to each inboard seat rib. The second hole is drilled in the bracket made above, and then everything else gets match drilled. There are also nutplate holes on the tops of the angles that get final drilled and countersunk for flush rivets. Here are the seat ribs with the angles and seat belt brackets clecoed in place: 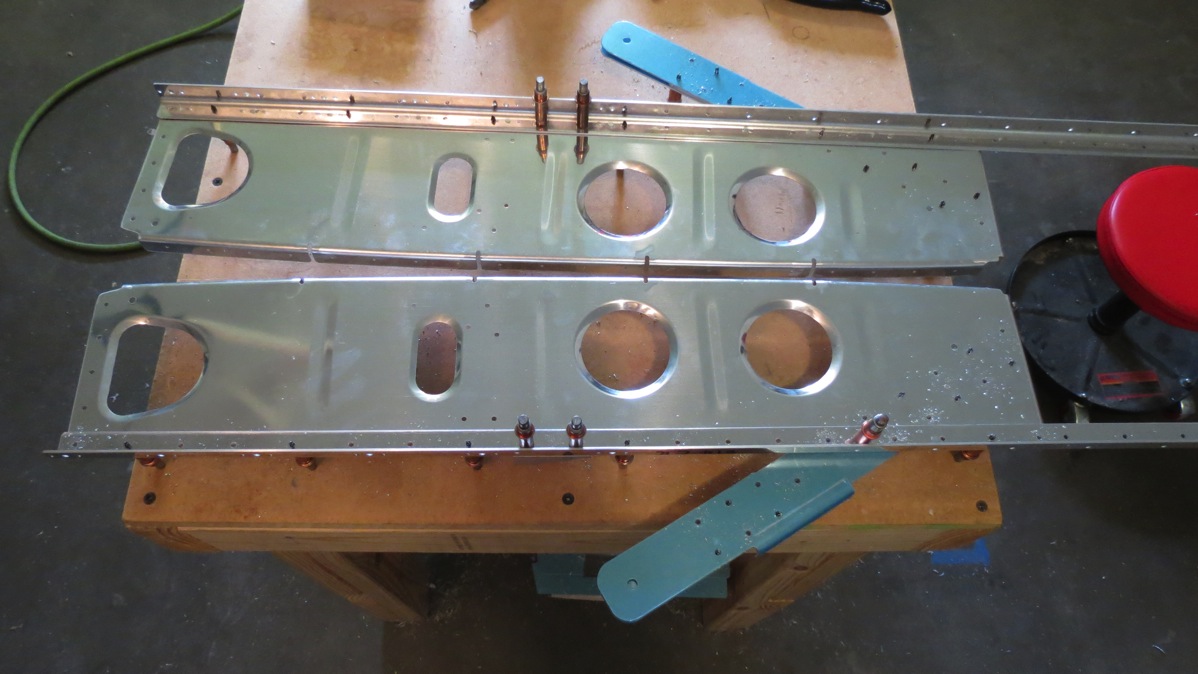 At this point, the instructions say to go ahead and if the aileron trim brackets if applicable. Since I’m doing electric aileron trim, this is definitely applicable. First I had to figure out where the trim kit was. This took longer than it should have, because I apparently thought it was a good idea to put this kit on a top shelf behind other stuff. After getting the kit out, for some reason I felt compelled to start at the beginning of the instructions instead of just fitting the brackets and calling it a day. And that’s how I spent an hour or so fabricating aluminum tube into the actuating arm of the trim system. This requires notching one end of the tubing to fit over the trim servo arm. The provided piece of tubing is a couple inches long, which was a good thing, because my first attempt at making this notch was ugly and I cut it off and started over. Second attempt turned out much better: 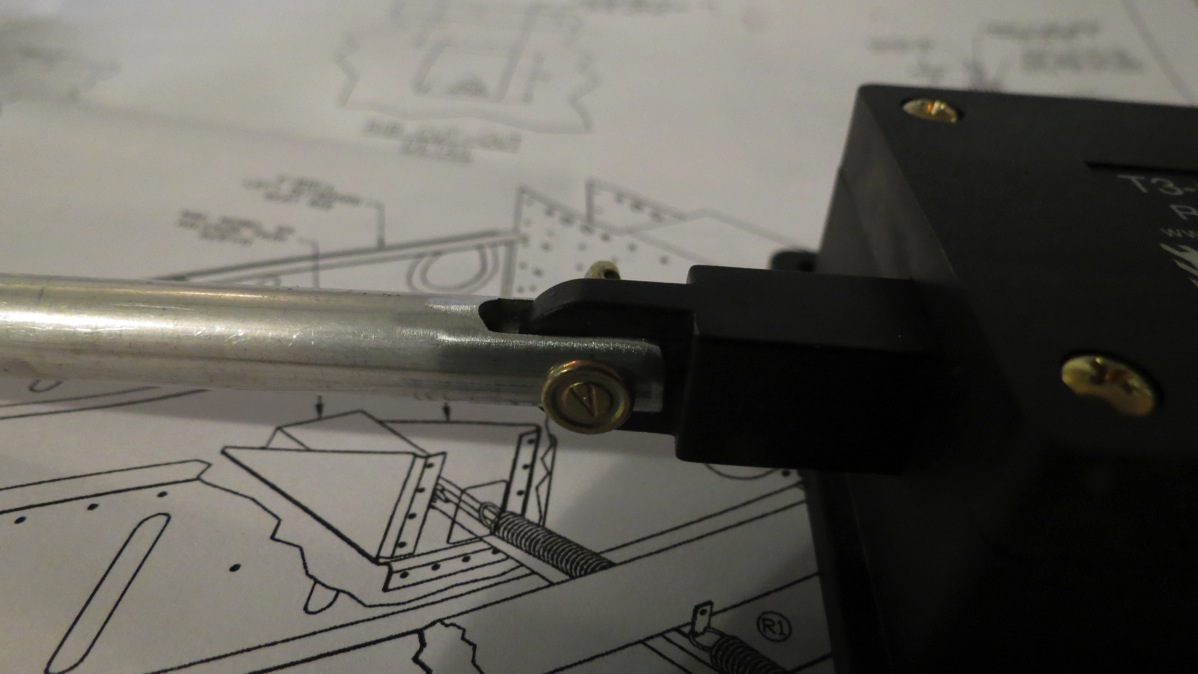 Then I finally skipped to fitting the brackets. The left rib gets a little platform for the servo to mount on, while the right side just has a little bracket with a guide for the actuating arm. There are already prepunched holes to fit the drill guides for these pieces. But I managed to foul up here too. There’s a drill guide for the platform on the left side, but the right is supposed to be drilled using the actual bracket. Well, I used the drill guide on the right side, drilled everything, and then realized my mistake. And of course the holes don’t line up.

At first, I’d resigned myself to replacing the seat rib, but upon further thought, this bracket is about as far from structural as it can be. So I elected to drill new holes on the forward side of the bracket, reducing the number of rivets on that side from four to three. This was necessary because the holes I’d already drilled were located such that the original bracket holes couldn’t be used. I also decided to fabricate a doubler to place on the inboard side of the rib, to provide some reinforcement to make up for the extra holes in the rib. Probably overkill, but it gives me peace of mind. It took an hour and a half or so to implement this plan, but eventually it was all done, and now I don’t have to order a replacement part.

Outboard side, showing the bracket. On the right side, the abandoned rivet holes can be seen: 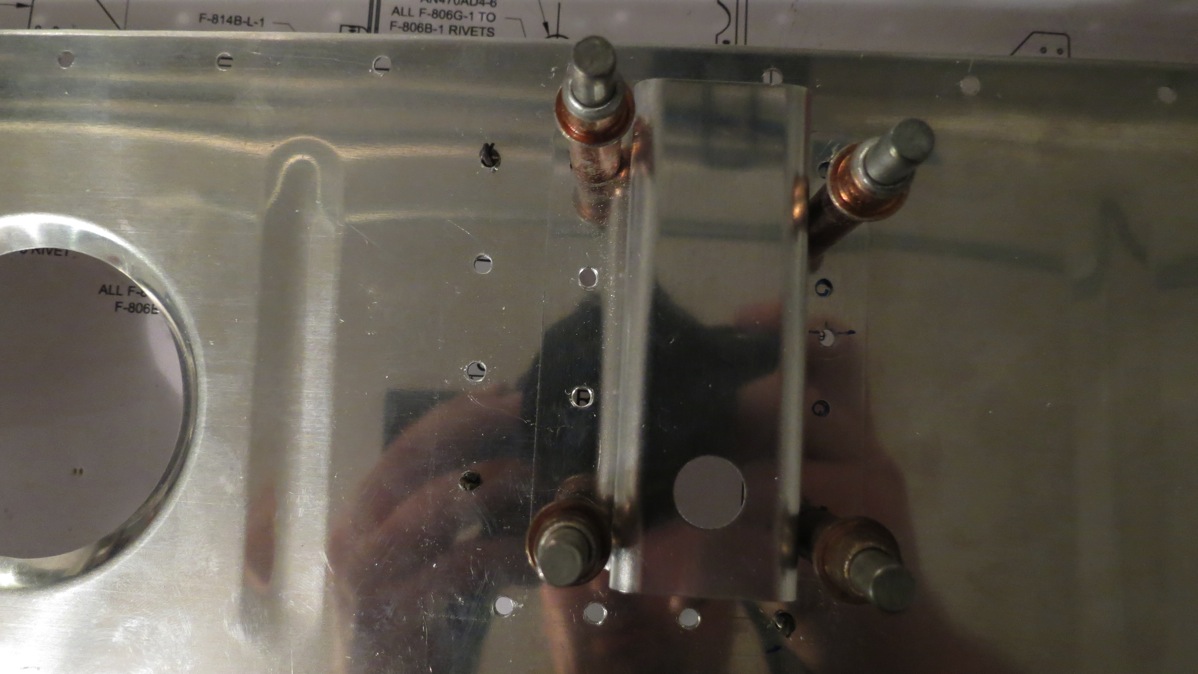 Inboard side, showing the doubler. I made this large enough to incorporate the extra holes to the far right, which would have corresponded to the servo bracket. The doubler also circumvents three of the rivets that go through the bracket (second from right). This is necessary because with the doubler trimmed to fit around the hole in the rib, there would be essentially no edge distance to those rivet holes: 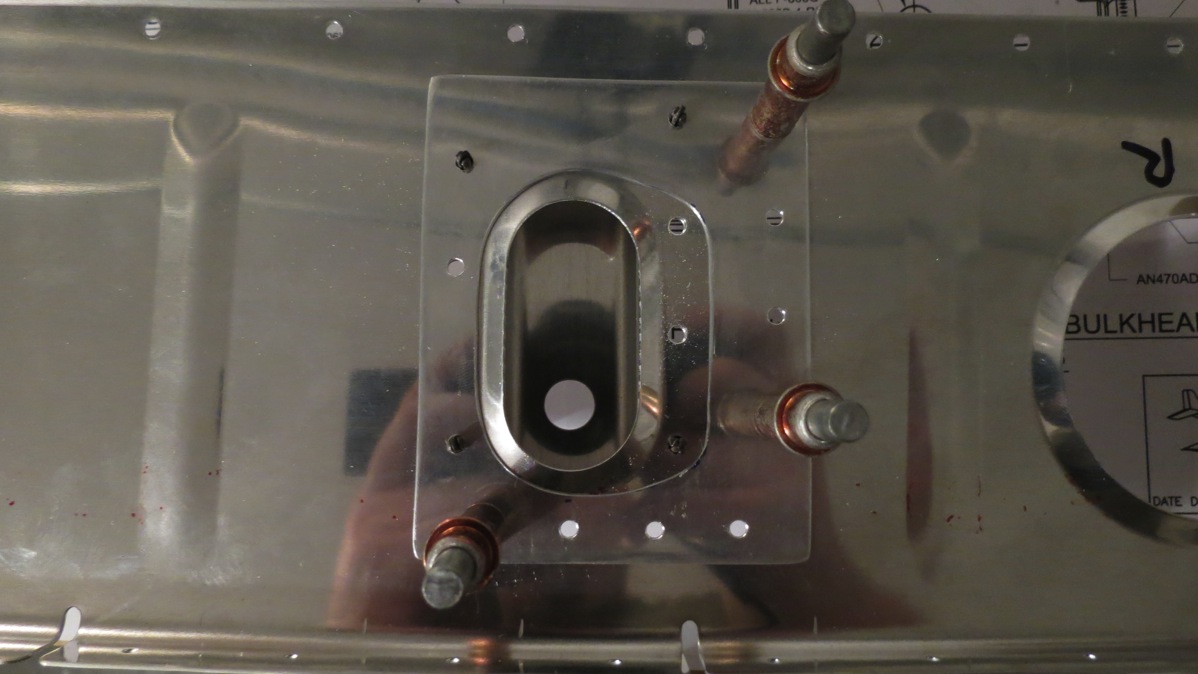 And that’s all for tonight. I need to write up my email to Van’s support about the center section, and maybe I can get the OK for my fix tomorrow and get back to work on that portion. I probably won’t get the rivets and stuff I need for the gear towers until Thursday or Friday. Here’s hoping the center section fix is approved!