Wasn’t quite as productive as I’d hoped to be today, thanks to other stuff to do around the house, but I still managed to wrap up work on the flaps. Well, almost…more on that later.

This time, we flipped the left wing out of the cradle and onto the workbench. Lined everything up, clamped the flap in place, and went to town drilling. All in all, it went pretty quickly, as things always seem to do the second time around. I didn’t get any photos of the process this time, but I did take some gratuitous garage dog photos, so you get to enjoy those: 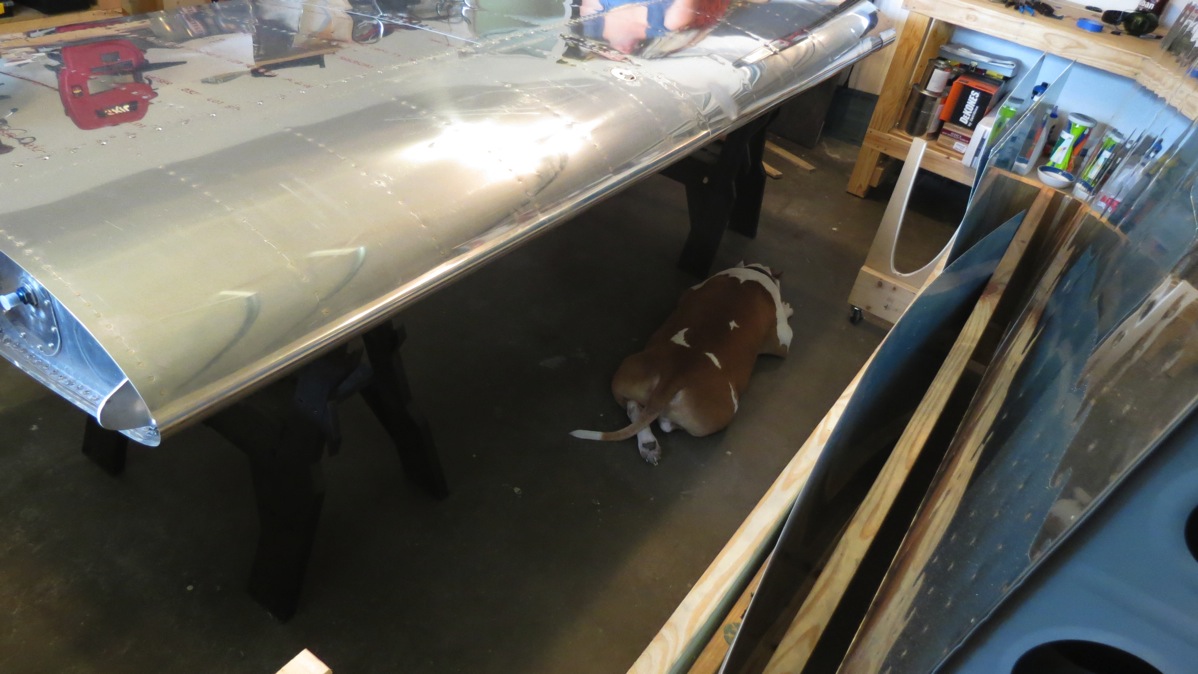 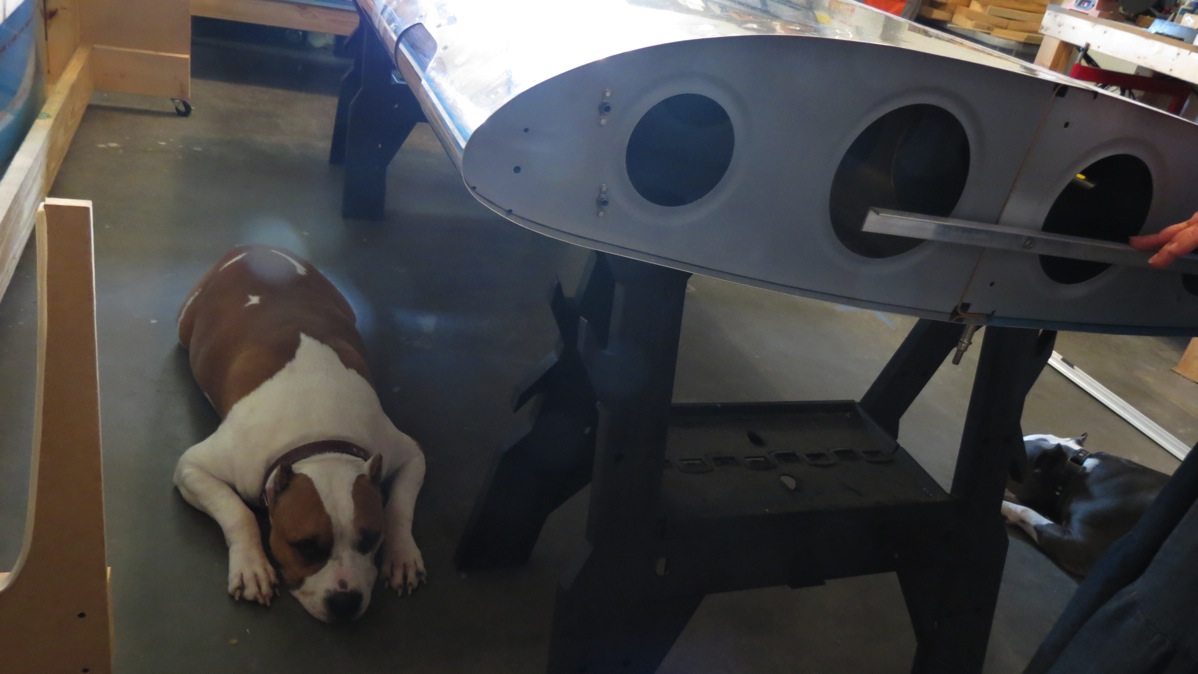 After finishing up the drilling and getting the wing back in the cradle, I cut and bent the hinge pins for the left flap, then moved on to installing the nutplates for the hinge pin retainer clips. Pretty straightforward stuff, though working with the flap brace in place made access interesting. I tried one solid rivet on the first nutplate, had it go badly, and summarily decided to use flush blind rivets instead: 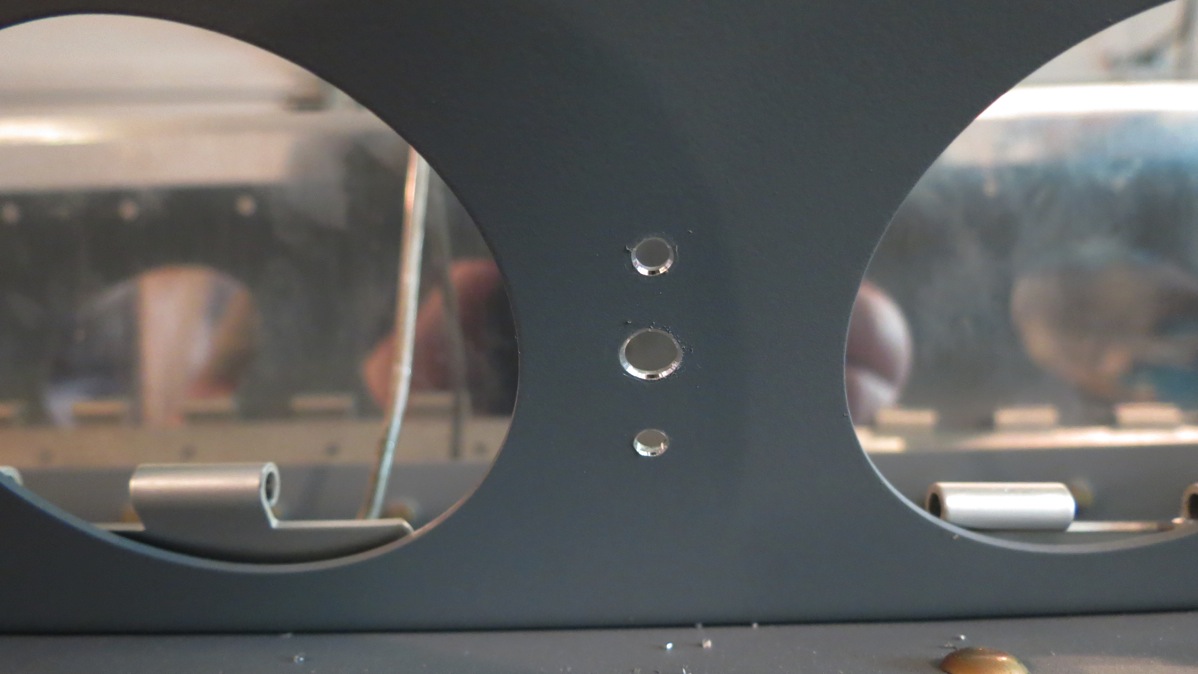 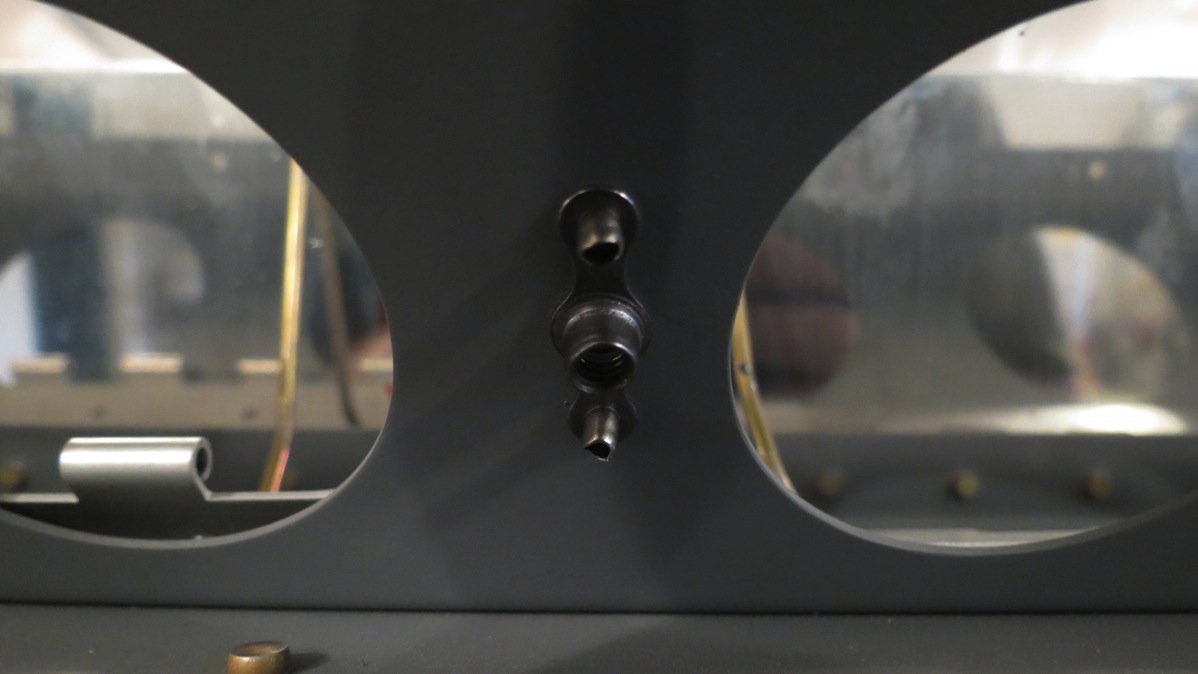 Unfortunately, I ran into a problem here. When I removed the wing-side hinge halves from each wing, I found that the rivet holes on the inboard end did not have sufficient edge distance. With the flap aligned to the aileron, there’s a very slight angle between it and the wing, so the rivet holes slightly crooked on the hinge, and they’re closest at the inboard end. I need to have 3/16” edge distance here (from the center of the hole), and I’m significantly under that. The calipers in this photo are set to 3/16”, showing the issue: 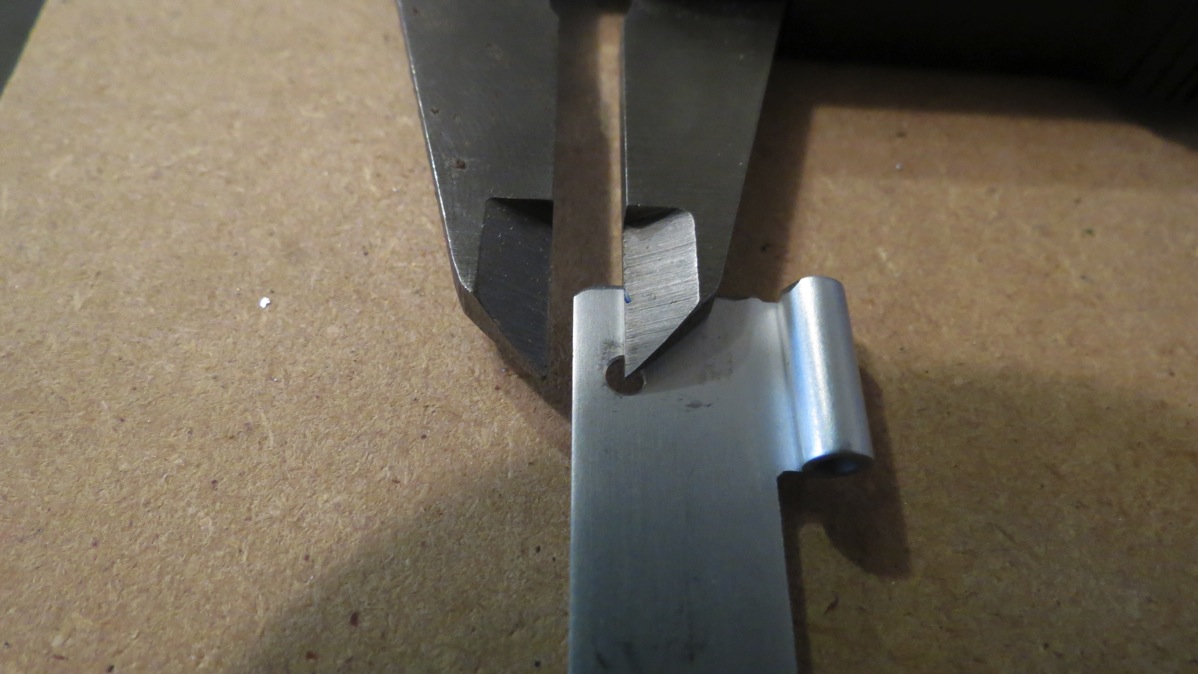 This seems to be a common issue for builders; my bit of research ran across lots of instances. It’s common enough that there’s an accepted solution: replace the hinge half with a wider piece. The provided hinge material is 1.25” wide, so I’ll just order some 1.5” material. About the only downside is that it’ll probably be too wide to fit inside the flap brace, so I expect I’ll have to trim it some. I’ve been meaning to start up an Aircraft Spruce wish list for a while now, looks like I’ll be making my first order sooner than I thought.

Anyway, despite the hinges being subpar, I clecoed them back in place and went ahead and mounted both flaps. Mainly this is just for storage purposes; seems better than finding somewhere to lay them: 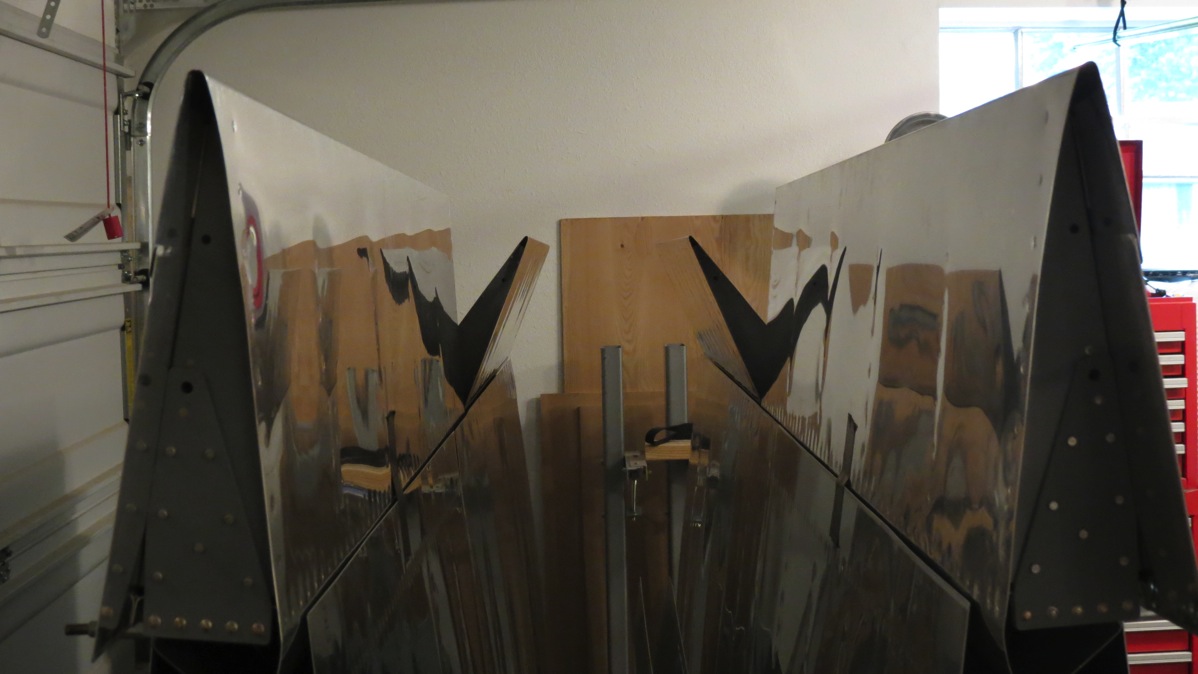 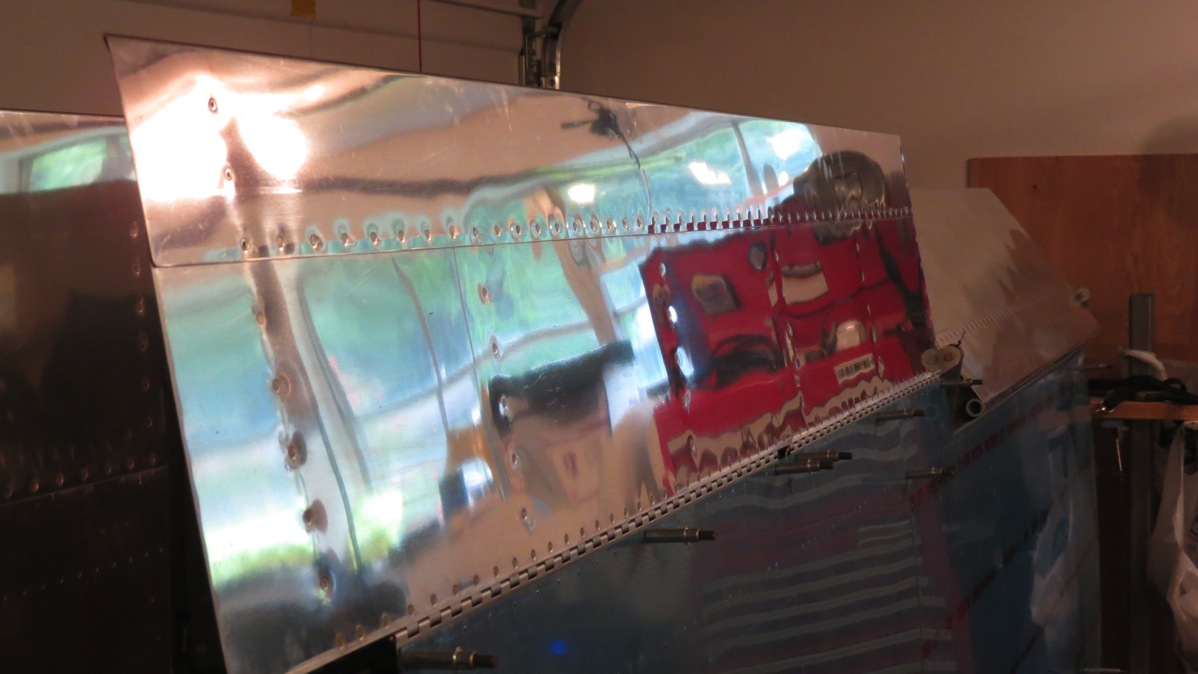 So I guess I’ll get back to work on the firewall until I get some goodies from Spruce.