Did all the riveting on the right aileron today. It sure goes a lot faster the second time around… I did have a heart-stopping moment while riveting the top spar-skin rivets though. As before, I had the aileron standing up on end, and I was almost done, just three rivets left to go. I turned to grab another rivet, and when I turned back, there was my aileron, toppling ungracefully over. Unmindful of my cries of dismay, it rebounded off my work stool and plunked to the concrete. Fortunately, it was undamaged. I figure that between the stool breaking its fall a bit and it landing on the nose skin – which was reinforced by the counterweight – I got off lucky.

There are a lot of blind rivets in the ailerons, which means a lot of rivet stems left over after everything is done: 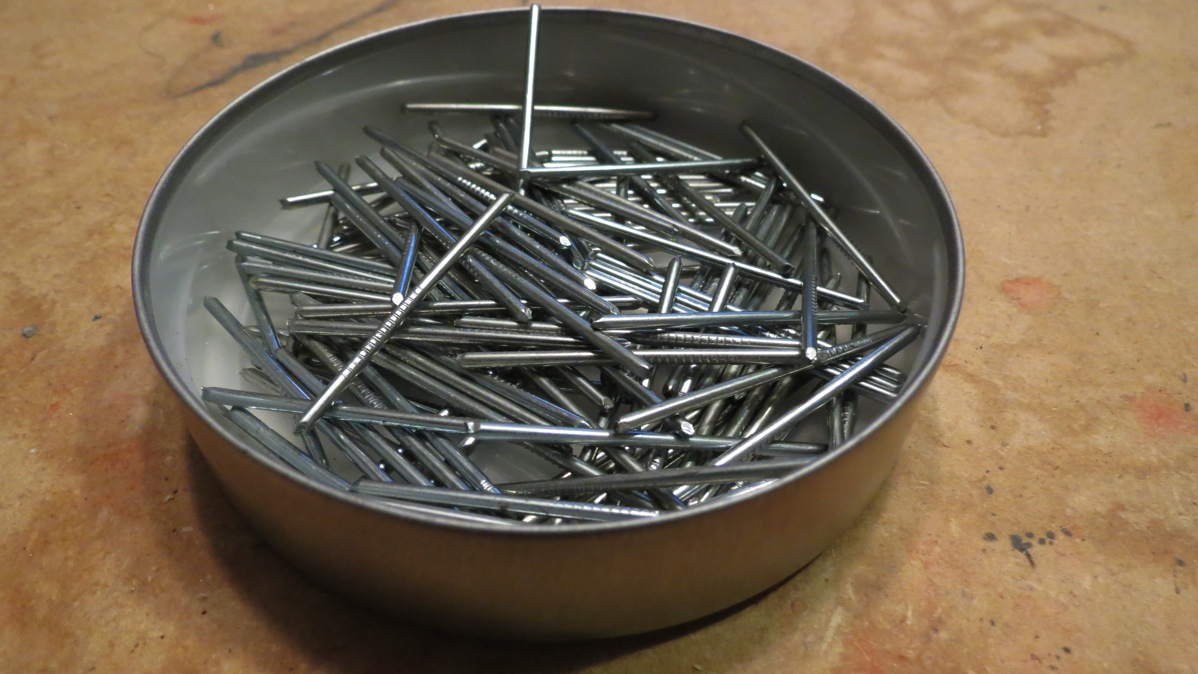 Once I had the aileron done, I mounted on the wing as with the left one. Next I went to work putting the appropriate washers and spacer in place at the hinge points. The outboard hinges are easy, requiring only washers, but the wider inboard brackets require a spacer to be fabricated from aluminum tubing. This isn’t a complex process, but it is painstaking, carefully shortening the cut piece of tubing to the proper length for a snug fit.

Here’s the inboard bracket and the washer and spacers and such in place: 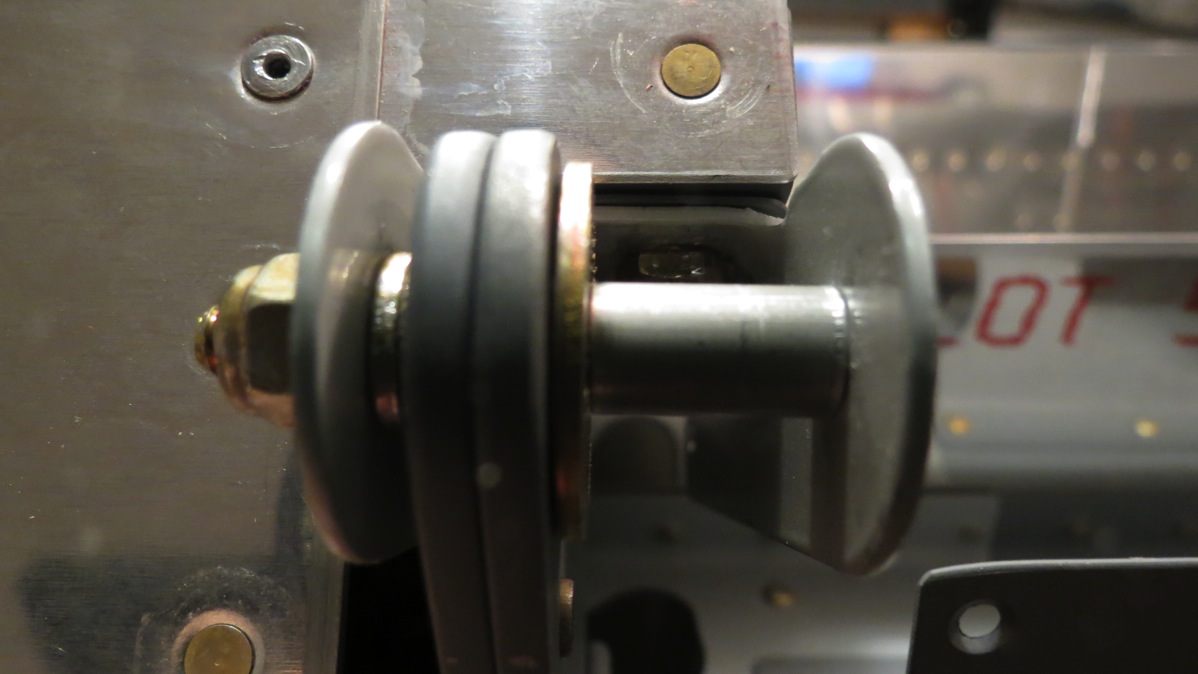 Both ailerons in place on the wings: 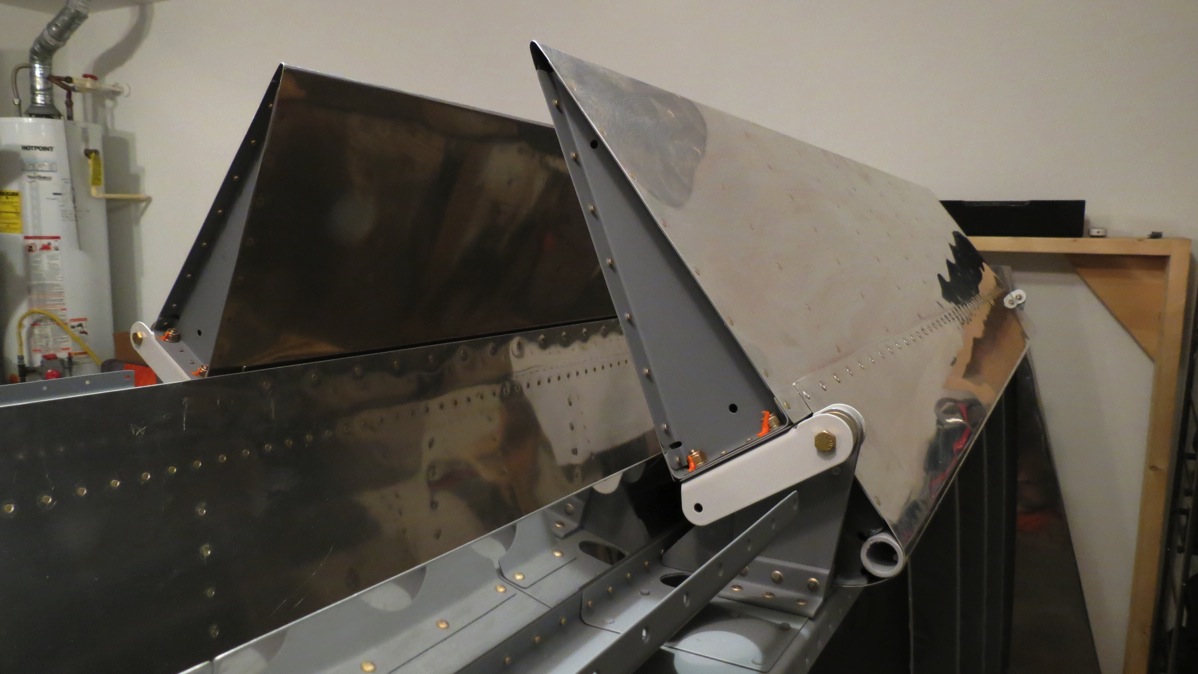 Next I decided to work on the aileron pushrods. I started with the shorter rods, which connect the bell cranks to the ailerons themselves. These pushrods are made from steel tubing, with rod ends riveted into the ends. I spent a fair amount of time carefully cutting the provided tubing to length and then laying out the rivet hole locations – no prepunched holes here! After drilling everything, it was time to rivet.

Riveting these pushrods seems to be a frequent source of consternation for builders. The rivets are very prone to folding over when driven, making for ugly shop heads. I chose to use shorter rivets than the plans call for, and I figured it couldn’t be that bad…wrong. The first rivet I tried with the squeezer clinched in nasty fashion: 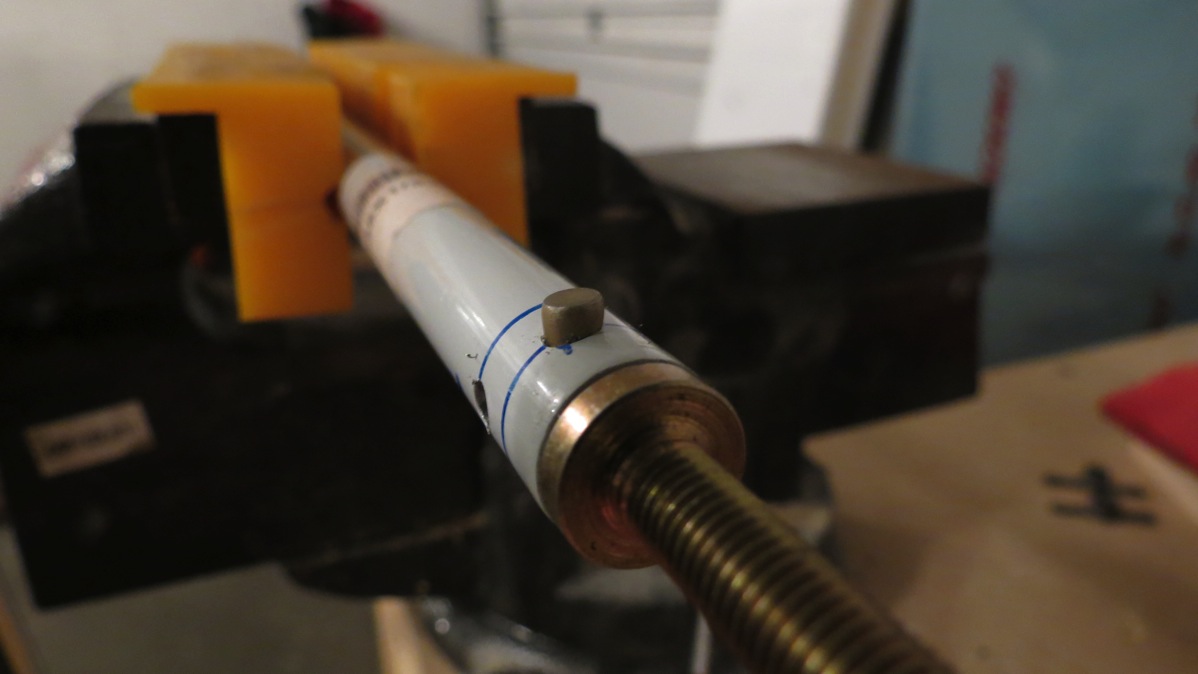 The problem was immediately obvious: I’d tried this with the squeezer held in the vise and me holding the rod in my hand. I imagine the rod rotated a bit when squeezing. That wasn’t too smart of a way to do this.

I decided that there was no way to hold the squeezer and the rod steady for this procedure, so I decided to try the rivet gun instead. I clamped the pushrod in the vise with the rivet as close to the jaws as possible. This worked great on the first two rivets, and for a moment I thought I’d cracked the code.

Nope…the next two clinched despite me being really careful with the bucking bar. So I drilled those out and then decided to call it a night. I was getting into the mindset where I really wanted to solve a problem, at the expense of really thinking through the options. That’s the kind of mindset where I tend to make problems worse.

So I’m not really sure how I’ll handle this. I’ve seen where guys have set the rivets using a C-frame, but I don’t see how that will make the rivets any less likely to clinch. The plans mention the option of welding the rod ends, which I guess I could do, though it seems kind of ghetto to do that after drilling the rivet holes. Another couple of builders have addressed the issue of the rivets bending inside the hollow rod end by filling the rod ends with something like JB Weld to hold the rivets better. I thought about doing that, but it’ll be a little messy since I already drilled the rivet holes.