Well, that was a lot of fun. Assembling the ailerons starts off deceptively easily: you attach the nose ribs to the counterweight with blind rivets. Then the nose skin goes on, followed by the trailing edge skin, and this is where the fun begins. The top of the trailing edge skin is attached to the nose skin and spar with solid rivets, but even with the bottom of the skin not clecoed to the spar, access to the inside is pretty tight. I must have spent half an hour just trying to figure out how to position the aileron so I could get the riveting done. In the end, my solution came from reading Jamie Painter’s build log, not my own ingenuity. You just put the aileron on end and now you can (relatively) naturally access both sides: 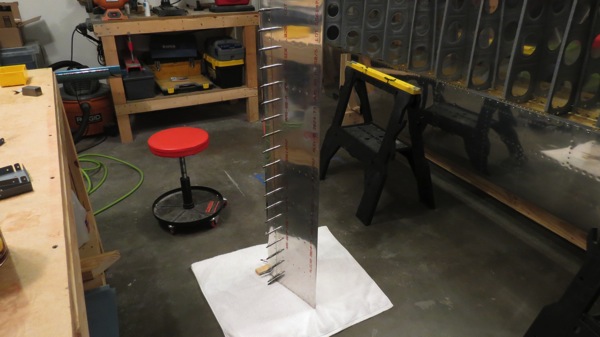 Even so, bucking has to be done by feel. But I got the hang of it pretty quickly, until I got to a rivet that was close enough to a stiffener that I couldn’t use the tungsten bucking bar. It took three tries to rivet that thing, and I ended up having to draft Josie to hold a flashlight and hold the skin while I worked. Removing the first two bad rivets marred the skin around the rivet head too, but hey, that’s what paint’s for…anyway, getting that one stupid rivet took probably half an hour total. But finally, I had all those top rivets done: 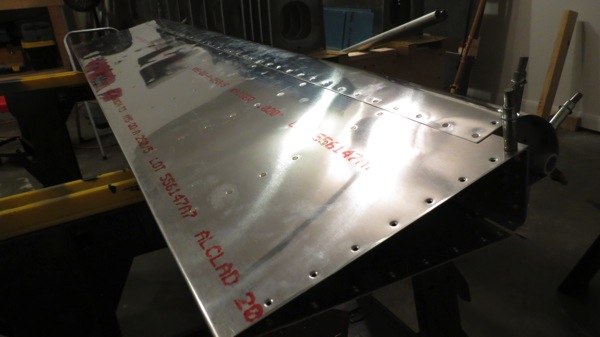 I’d kind of hoped to get this thing finished tonight, but oh well. It wasn’t for lack of trying, that’s for sure. The good news is that things should be easy from here on out; the rest of the rivets on the aileron are either accessible with a squeezer or are blind rivets. I imagine I’ll have this thing wrapped up pretty quickly tomorrow, and hopefully riveting the left aileron will go faster now that I’ve worked out the technique for the most part.