A little priming, a lot of flap work

So my first order of business for the day was to run to the nearest Napa and buy up their entire stock of 7220 self-etch primer. I should be set on that stuff for a while now, I think. Back at home, it was fairly rainy today, so I ended up priming just inside the garage door again. First up, I shot 7220 primer on the aileron spars. Next, I mixed up a small batch of EkoPoxy for the counterweights. Since I knew that I’d have a ton of extra epoxy primer mixed up, I decided to use the surplus to prime the insides of the counterweights as well as both pairs of aileron pushrod. The instructions recommend pouring the primer into the pushrods to do this; I decided to just spray it into one end with the spray gun until it ran out the other. It worked, but there’s a whole lot of waste in this technique: 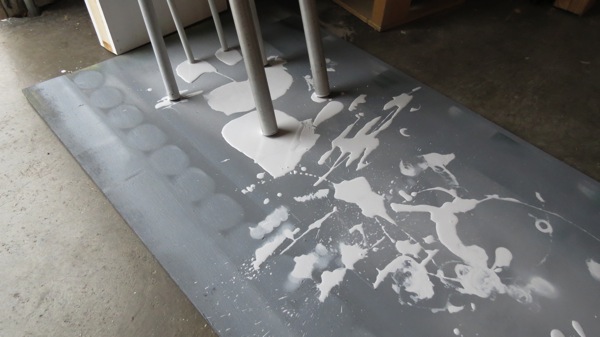 The bigger issue was that instead of using the surplus primer for this, I used all of the batch just on coating the insides. And I hadn’t sprayed the outside of the counterweight; that was going to be my last step. Fortunately, it’s acceptable to apply this primer with a brush, so my ghetto solution was to dip a paintbrush in all that extra primer that had run out of the tubes, and then I brushed that onto the counterweight tubes. The finish will look cruddy, but that’s OK, it won’t be on display.

Next, I went to work riveting the aileron skeletons, though I didn’t get very far. Step 1 was to rivet the hinge reinforcement plates onto the spar. Most of the rivet holes remain unfilled, since they rivet in assembly with the ribs: 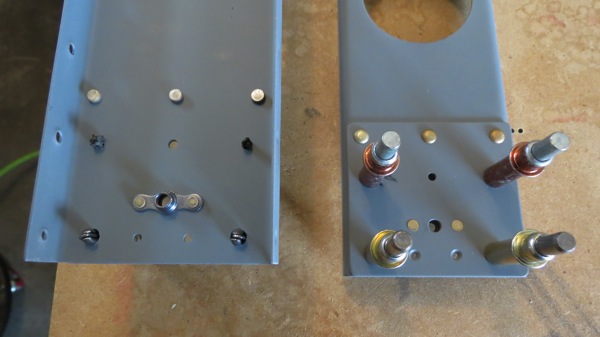 The next step in the instructions is to rivet the counterweights to the nose ribs. The counterweights that still had wet primer on/in them. So that was the end of aileron work for today. Time to move on to the flaps. First step was to match drill the ribs to the spars, then the bottom skin gets clecoed on, the holes in the reap spar are drilled to the internal ribs, and finally the bottom skin is match drilled.

Next up is drilling the piano hinge half that the flap will rotate on. The provided hinge pieces are much longer than needed; the plans say the hinges should be 56”, but the spars are a little longer, so I cut the hinges to be the same length as the spar. I realized about halfway through the drilling, when checking the plans, that the hinge doesn’t actually go the full length of the spar, hence why it should be a little shorter. I just went ahead and drilled the entire length of the hinge; I’ll trim it to the proper length when the time comes.

Anyway, drilling the hinges was fairly repetitive: After clamping the hinge in place, I just went down the spar, drilling, reclamping, and clecing as I went: 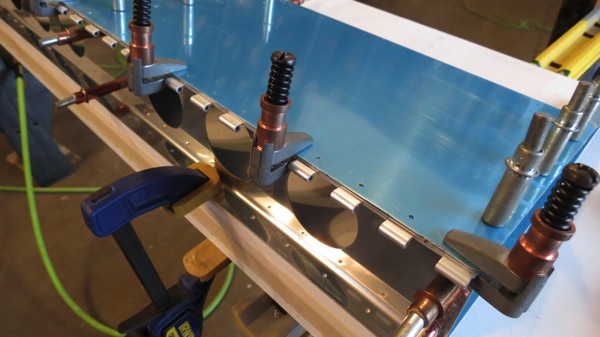 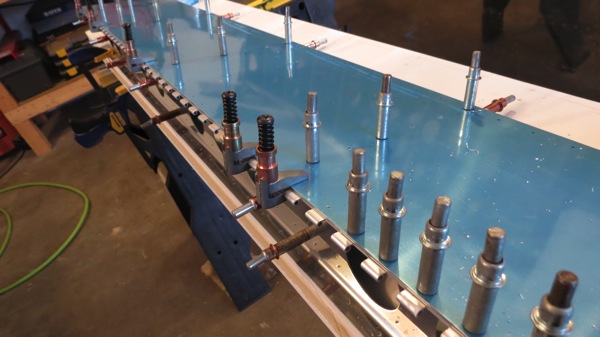 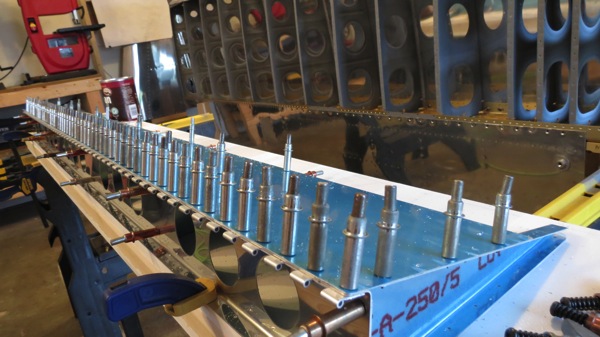 Finally, I clamped the top skin into place on the right flap: 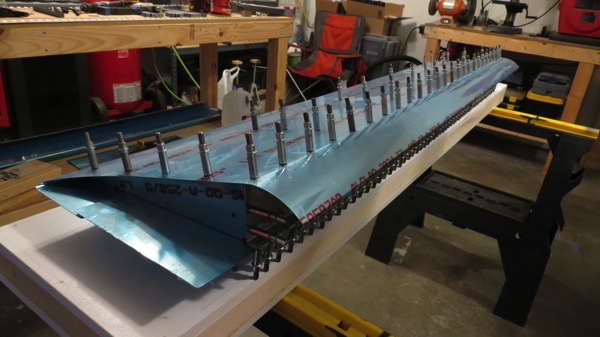 The next step is to match drill this skin, but I stopped short of doing that. We’re going out to catch a movie, so I needed to get showered and ready to go. I guess I’ll keep going on the flaps for the time being, since my workbench is now covered with all the stuff I’ve been using for the flaps.

In other news, I called Van’s last week to check on the status of my fuselage kit. The only big piece I’m waiting on is the roll bar, which is off getting powder coated now. Sounds like the kit will be crated and shipped this coming week!