Didn’t get a lot done today. The main thing I wanted to get done was priming, but no sooner had I finished cleaning all the aileron parts when it started to drizzle. So I brought all the parts inside the garage and waited for them to dry even longer than I’d originally expected. I was able to set up my table and shoot primer on the small parts just inside the garage door though: 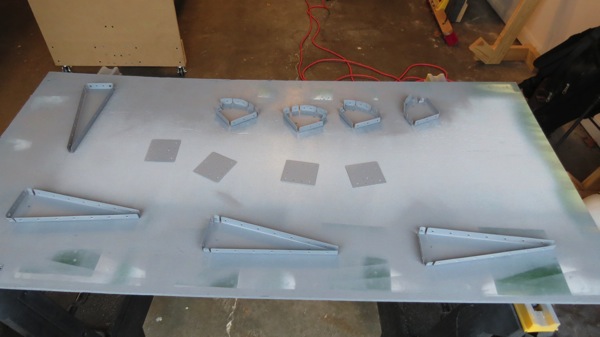 But that’s all the priming I got done. I’m on my last can of 7220, and I think I’m going to keep using the 7220 for internal parts that don’t need to necessarily look good or have a tough finish. The rattle can is much easier than mixing up batches of epoxy all the time. So I suppose I’ll make a Napa run tomorrow morning and then try and get the spars primed. I do still want to use the EkoPoxy to do the counterweight pipes, and while I’m mixing up a batch, I figure I’ll prime the insides of the aileron pushrods as well. I cleaned those today too, and considered trying to prime them, but I thought it was better to let them dry overnight to ensure there’d not any remaining water inside them.

In the meantime, I started tinkering with the flaps a bit. The instructions say these are the easiest control surface to build, but I’m skeptical. The construction is actually kind of interesting. First off, in lieu of using stiffeners like the ailerons, the flaps have ribs throughout; I presume this is because they’re subjected to greater aerodynamic loads. Even more interestingly, the skins come in two pieces, but not joined at the trailing edge. The bottom flap skin terminates in a sort of quasi-spar that rivets to the trailing end of the internal ribs. The top skin, in turn, wraps around the trailing edge and includes the aft 20% or so of the bottom skin.

Kind of hard to explain, but here’s the bottom skin with an internal rib in place, showing the design: 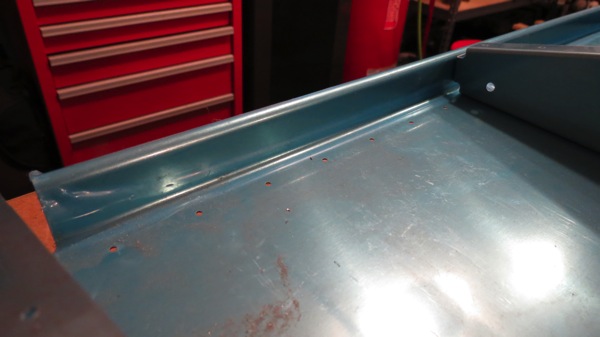 I didn’t really mess with the flaps much though. Some shims have to be constructed before doing any real match drilling, and I didn’t really feel like getting involved with all that today. Kind of feels like I have too many separate things going on right now; I’d rather finish the ailerons before I go nuts messing with flaps. Or maybe tomorrow I’ll feel more like playing with the flaps, we’ll see.