So yeah, still no more riveting activity. Josie has been under the weather the last couple days, and as much as I’d like to go shoot some rivets, it’s not worth pushing her to help when she’s tired and/or not feeling well. No rivets is better than bad rivets. So I took last night off and then started tonight with some general housekeeping – first tidying up the area and then working up a materials list for the wing cart. Then I jumped ahead to working on the ailerons.

Task #1 is making a bunch of stiffeners, 32 to be exact. The good news here vs doing this for the elevators is that all the stiffeners are the same, instead of having various lengths. But like all the other stiffeners, they come in long angle pieces that have to be cut down to size and trimmed: 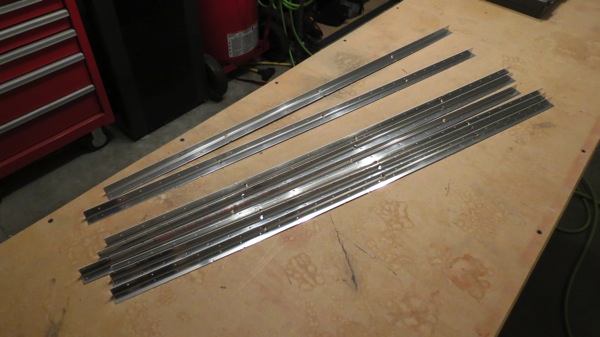 I started out using the bandsaw to make the taper cuts at the ends, but I was about halfway through when a loud thud erupted from inside the thing. Seems the blade broke – maybe I shouldn’t set it so tight. But no worries, I had a spare blade to swap in! Except it turns out I bought the wrong length blade. So I finished up the taper cuts using snips.

I almost quit for the night at that point – it was getting towards 11 – but I decided to go ahead and fire up the bench grinder to clean up the edges. I’d figured on maybe doing some of the work and then stopping, but of course I just ended up doing all the deburring, which took over an hour. But now I’ve got a nice set of stiffeners, ready to be match-drilled to the skins: 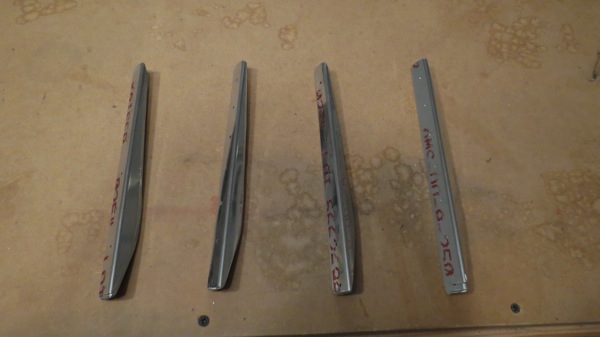