So after last night’s back riveting debacle, I posted over at VAF to ask for help with the technique. Turns out the main issue is really cranking up the air pressure to the rivet gun. I’d turned it up a bit last night, but just a touch, like the change I make when shooting -4 rivets instead of -3s. Seems I need a lot more juice than that to overcome the extra mass of the long rivet set.

After work we went to an AOPA safety seminar, which lasted until 9 or so. After that, I decided to practice some to try and get the hang of the technique. I used a scrap stiffener angle and a chunk of my junk LE skin, drilled and dimpled them, and then tried the back riveting. I started out by shooting a few rivets agains the back rivet plate on the bench. Sending about 80 PSI to the gun makes it set the rivets much better, though even then I have to shoot for what seems like a really long time.

Once I’d set a couple that way, I clamped my practice piece in the vise and had Josie come out to hold the big bucking bar while I shot a few more, to better represent the real application of the technique. I smeared a few of those rivets, I think partially due to the work piece tending to move around and partially due to me being a little sloppy. 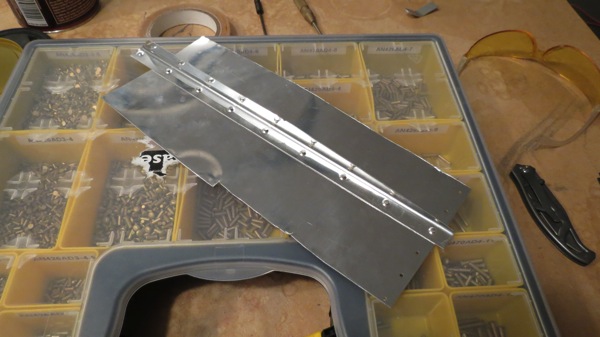 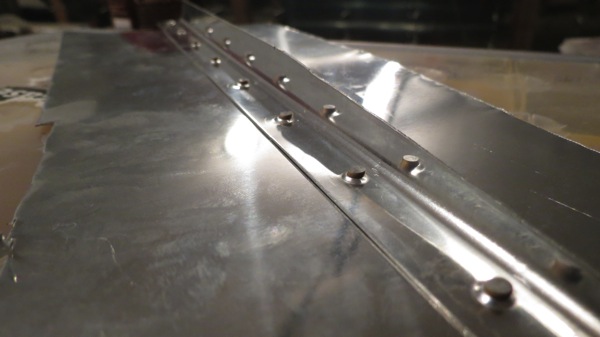 Bottom line, I feel way better about the back riveting technique, so we’ll give it another try tomorrow night.

I also drilled out (for the third time) that bad rivet from last night. Upon checking the hole afterwards, it was clearly oversized by this point, so I went ahead and drilled it out to #30. That’ll get a NAS1097 rivet…which should be fun to back rivet…but whatever, we’ll make it work.