I started out today by dimpling all the main ribs and both rear spars. The instructions say you should touch up the spar dimples with a countersink for a better skin fit, but when I did a test fit with a dimpled skin patch, I had really good fit with just the plain dimples. The instructions also warn against taking off too much material in this step, so I decided that not countersinking at all was the best choice.

Then it was time for some riveting. First I squeezed a few rivets on the spar; the main ribs that sit behind the fuel tank each have a hole on the top and bottom where there’s a rivet just through the spar and rib, which will then sit under the tank skin. Those were easy to squeeze, then I moved on to the big job – the LE units. I was mindful of the incident where I dropped a bucking bar and put a dent in my tank skins, so this time I put some old towels and rags down in the bottom of each bay just in case: 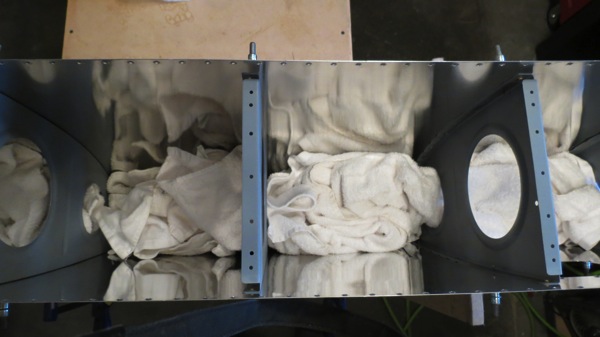 Then it was lots and lots of shooting. I got all the rivets except for the forward most three on the top of each unit – I’m going to need help for those, and since Josie was working most of the day today, I couldn’t recruit her. We should be able to get those rivets done one night this week, I think. In the meantime, I set the almost-finished LE units on the spars for a photo op: 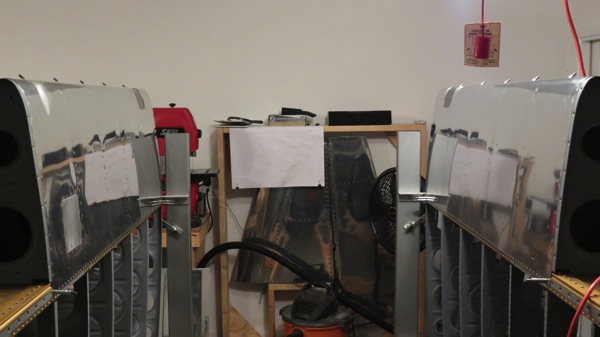 The afternoon was still young at that point, so I decided to go ahead and start dimpling the main top wing skins and the wing walk doublers. That took quite a bit of time, but I got all the skins done, at the cost of a couple blisters. Yep, there are lots of rivet holes in these wings. But hey, dimpled skins! 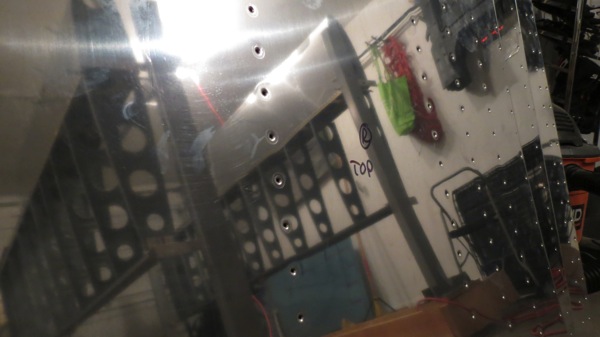 At this point, I figure my evening tasks for this week will be finishing the LE skin riveting, riveting the LE units to the spars, and priming the corners of the main wing skins where I made the scarf joints earlier. Then next weekend can be main skin riveting time!