Nice productive day today. I was supposed to fly this morning, but for the second weekend in a row the weather forced a cancellation. But hey, more time to work on the plane. Despite it raining all night and there being a persistent overcast in the morning, I knew it was going to clear up later, so I went ahead and cleaned the few parts I had so they’d be ready to prime. Of course, they took forever to dry in the cool humid air outside.

Meanwhile, since the first landing light lens work was still fresh on my mind, I decided to go ahead and do the other one. I clecoed together the right LE, sans the inboard rib and joint strip, since they were on the priming list for today. They’re at the other end of the unit from the landing light, so they won’t affect the fit of the lens. As is usual with things like this, my second lens came together quicker and was better quality than the first: 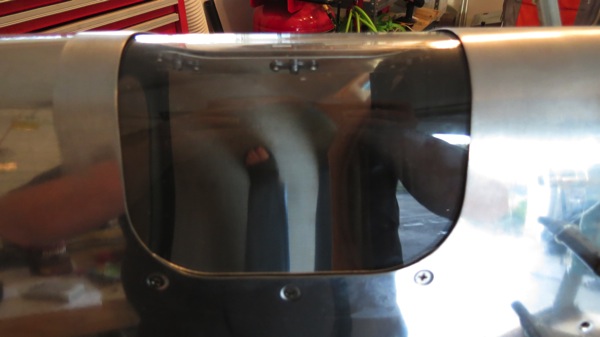 By this time, it had cleared up outside and the cleaned parts were dry, so I got started priming them, and in between spraying coats, I did some tidying up in the garage. The floor was getting kind of nasty, especially under my main workbench, which hasn’t moved in probably six months or so. The composite of spider webs, dog hair, and metal shavings down there was quite impressive.

So now what? Spar countersinking will still have to wait until next weekend or after whenever my in-out deburr tool comes in. I could go ahead and start riveting the LE units, but I wasn’t in a riveting mood (whatever that means). Instead, in keeping with the instructions, I decided to turn my attention to the top wing skins. They need to come off anyway so I can deburr and dimple the main ribs and the rear spar, and of course the skins need to be deburred and dimples as well.

It’s been a while since I had bare skeletons sitting out here: 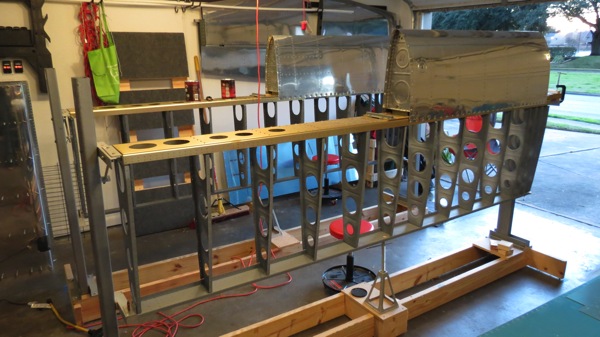 Now for the real fun…removing the blue vinyl. I need up with a vinyl pile the size of a small child: 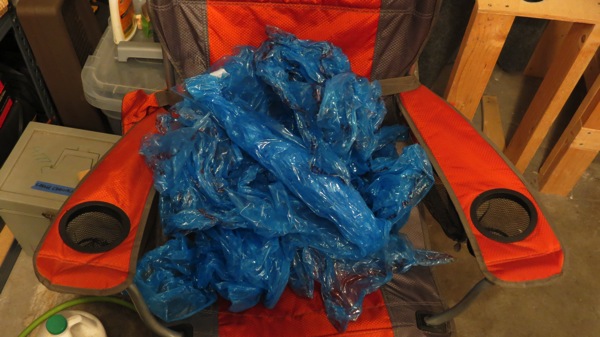 And then I went to work on the rivet holes. Sorry, no exciting pictures here…just me doing lots of menial work. I got all the holes in the top skins done and quit for the night at that point. Tomorrow I suppose I’ll take care of the skin edges, get them dimpled, and probably dimple the main ribs and rear spar as well. And then I guess I really will have to get into a riveting mood and go to work on the leading edge units.

I’m finally reaching one of those building stages where things start coming together quickly. Once the LE units are riveted together, they’ll get riveted to the spar. Then the top skins get riveted. And then the wings come off the construction stands and I start working on control surfaces. My fuselage kit is expected to ship the second week of February, so I should have no trouble having the stands out of the way before the fuse gets here, though I might still be working on the flaps and ailerons.