Well, that’s it. I think these things are done with the exception of the baffles.

I started out the night by working on the inboard sender plates. I had figured that these might be a bit of a pain, and I was right. The main issue is that the final work on these things has to be done within the confines of a tank bay. First, the wires from the outboard plate and the inboard terminal are pulled into the second bay and cut to length. Next they get stripped and crimped into a ring terminal – this was a lot of fun. Stripping the wires was easy, but getting my crimpers way in there while not pulling the terminal off the wires was quite a challenge. This was especially difficult since the tight quarters made it tough to squeeze the things with sufficient force to get a good crimp. I was glad an extra terminal came with the kit, since I failed in my first crimp attempt.

With those guys crimped, now they had to be attached to the plates. This was even more fun – trying to manipulate a stubby Phillips screwdriver and a combination wrench at arm’s length inside that bay. I found that I could reliably turn the screwdriver about 1/8 of a turn without it slipping off the screw, so needless to say, tightening those things was rather tedious.

With the terminals secure, I mixed up a couple ounces of sealant and put it in a bag for application. More fun here – I needed to coat the exposed terminals in sealant, once again in the tight space. I did the best I could to squirt a liberal amount of sealant on each terminal, then I smeared it all over the place with a gloved finger. I set the bag of sealant aside for later use and mounted the plates to the ribs.

The last step was to get out the multimeter and check for good continuity in the circuit. The general principle of the capacitive senders is that the tank structure acts as one half of the capacitor, and is grounded to the outside of the BNC connector. The sender plates act as the otter half, and are wired to the center terminal of the connector. So the expectation is that the plates have continuity with each other and the center terminal, and no continuity with the tank structure. Similarly, the structure should have continuity with the outside of the connector. All of these checked out (whew!).

One inboard plate, mounted in place: 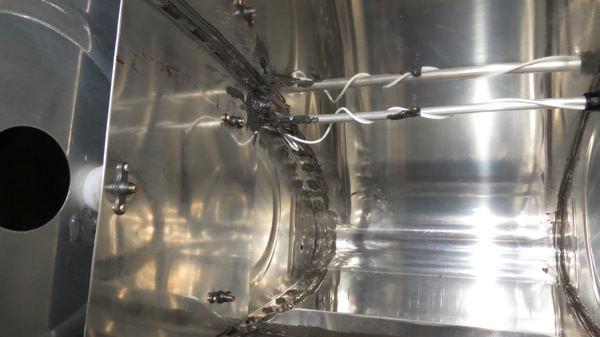 I also added dabs of sealant along the wire run to hold it to the vent line, and also on the snap bushings to prevent rotation: 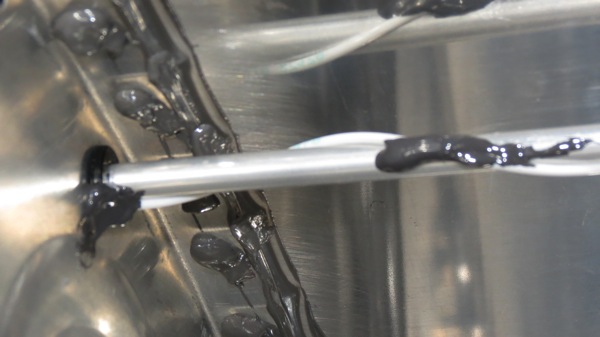 I used the rest of the mixed sealant to cover all the shop heads on the end ribs. I did some research on this and the results were unsurprising: Some builders felt it was unnecessary, while others took a “can’t hurt” approach. I agreed with the “can’t hurt” folks, so the heads got coated: 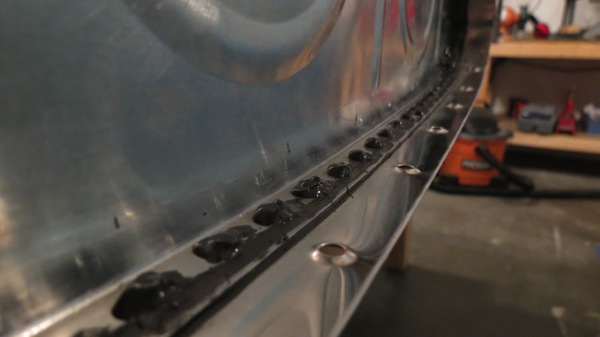 Finally, I unscrewed the B-nut between the vent lines and their bulkhead fittings, coated the fittings with fuel lube, and then reinstalled the B-nuts and torqued them. And that, my friends, completes the tank internal stuff. I’ll probably do a final inspection of everything tomorrow night, just in case anything needs touching up, but I don’t expect any problems.

For the last picture of the night, here’s a family photo: 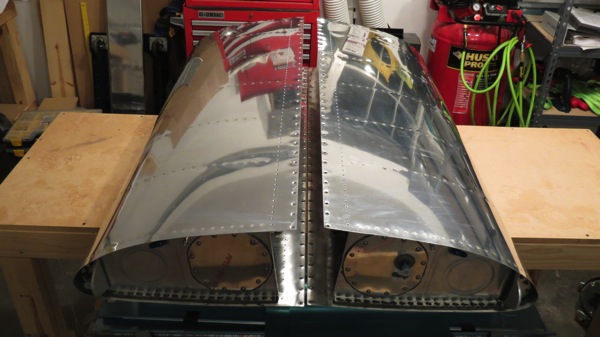 Now to decide what to do with the rest of the week. Do I take a few evenings off and relax, or start looking at leading edge stuff? I’m very ready to work on stuff that doesn’t involve sealant…