Whew…I’m finally getting there! I got out to the garage around midday today and started by removing most of the clecos, cleaning out the holes, and then I mixed the sealant and got down to riveting. Things went well for the most part, except that I had some problems with the squeezer sliding around, and I ended up with a fair number of clinched rivets like this: (note: there were some much worse than this, I took this picture mainly because it was the best-lit example) 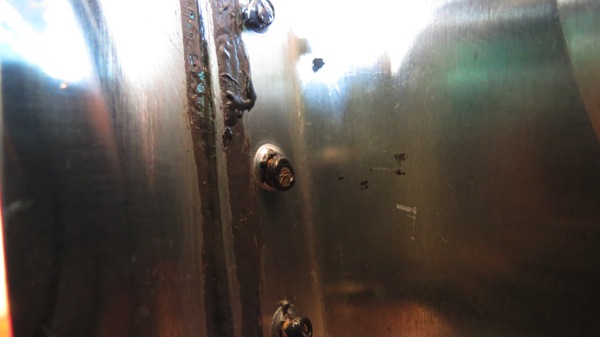 So after I had Josie come out and help me rivet the forward attach bracket, I took a little break and then went back to inspect the rivets. I ended up marking about fifteen or so that I felt were bad enough to merit replacing, and those got drilled out.  Many of the holes ended up oversize; I suspect this was the problem from the start, since oversize holes can easily promote clinching like this. So I ended up drilling out to #30 and using NAS oversize rivets in most of the drilled-out holes. Tougher to squeeze, but they set nicely and now I can live with the state of the tanks.

Meanwhile my first batch of sealant had cured to the point that it was unusable, so I mixed up a new small batch to use replacing the rivets. That, in turn, meant I had some surplus left over afterwards. This worked out well; I still needed to encapsulate all the shop heads on the nose reinforcement rivets. I had just enough to put a good dab on all of those guys.

One thing I’m debating now is whether to encapsulate the shop heads on the end ribs. These are outside of the tank itself, so they won’t be exposed to fuel, and thus it’s probably OK to skip them. On the other hand, on the off chance any fuel is able to get between the rib and the skin, sealant on the shop heads could be a last line of defense to prevent a leak. I guess I’ll see what other builders have done, and if I’m still on the fence, I’ll go with the old “it’s cheap, don’t be skimpy” line.

So these things are almost done! This week I just need to finish the wiring for the fuel senders and torque the vent line fittings, and I imagine I’ll do a final inspection of the tank internals. Maybe Thursday and Friday evenings I can do my water leak tests, and Saturday I can get rolling on the baffles.

Oh, and here’s one more picture. It doesn’t show anything I built really; it’s actually the big empty shelf space where all these wing and tank ribs used to live. The pile of parts is gradually getting smaller! 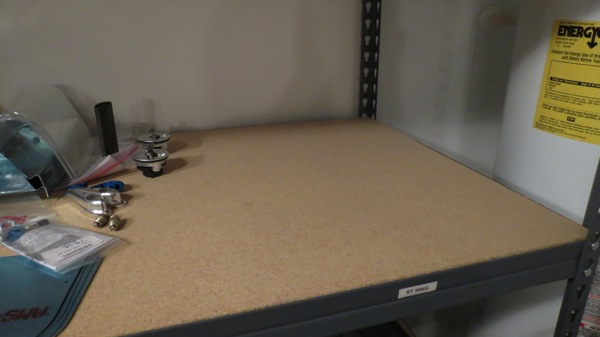