Since I still had some sealant mixed up, I decided to go ahead and put the access plate on as well. I hadn’t scuffed these mating surfaces, so that was step 1, followed by a good acetone cleaning. For this application, I put a bead of sealant both on the rib and the access plate. I also swirled a bit of sealant on the tip of each screw before installing it, which gave me a nice sealant bead at the base of each screw. There shouldn’t be any issues with leaking around these guys: 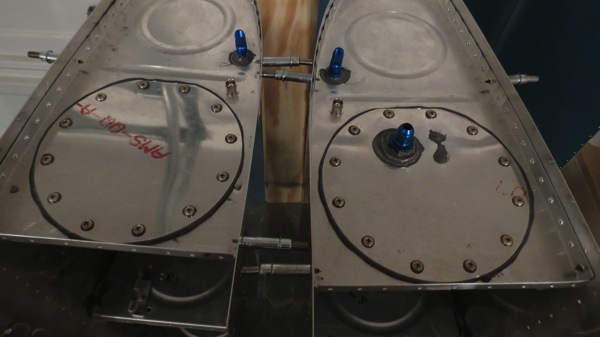 A brief comic aside while I’m on the access covers: some of the nutplates had sealant built up in them, so I wanted to run a #40 drill through them to break up the buildup. When drilling like this, I’m used to holding the drill bit lightly with the fingers of my left hand to help guide it. Turns out that doing this wile wearing nitrile gloves can result in a pretty amusing tangle situation: 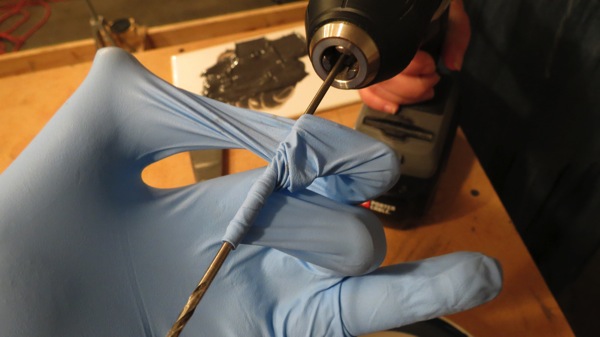 Finally, here’s a shot of one of the outboard sender plates: 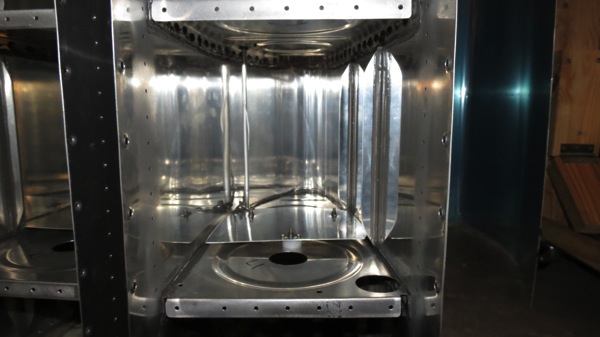 I didn’t install the inboard plate yet because I’ll have to solder and crimp the ring terminal in place after I run the wire from the inboard end rib. That should be lots of fun. Tomorrow I’m going to shoot for getting the end ribs installed and wet riveted. I read an interesting idea for an early leak test, wherein you fill the tanks with water prior to installing the baffles. It’s not a perfect test, since fuel is less dense than water and can probably seep through bad spots better than water, but it’s still a way to maybe identify trouble spots and fix them before the tank’s closed – at which point fixing leaks might require creating some new access plates in the baffle. Thing is, the sealant needs to be decently cured first. I’m hoping that if I get everything riveted tomorrow night, then three days of sitting in a warm Houston garage will cure the sealant enough for me to do the water test on Saturday.