Well, the main thing I learned/concluded tonight is that I won’t be closing the tanks this weekend – at least not both of them. I think the best-case scenario is that the right tank might be ready for the water test Saturday or Sunday. This isn’t because I broke anything, just that I once again overestimated how much I can get done in the evenings after work.

I did realize earlier today that I made a mistake though – when I installed the outboard fuel sender plates last night, I forgot the little nylon tubing spacers that surround the screws to ensure they’re electrically isolated from the ribs. So first thing when I got out today, I got to put those in. At least I was able to do it without totally removing the plates; I was able to remove one screw at a time, insert the spacer, and then reinstall the screw. Bit tedious, but far better than completely removing and reinstalling the plates.

Next, it was time to address the end ribs. I was already beginning to suspect at this point that my goal of installing and riveting all the end ribs tonight was horribly optimistic, so I reduced my goal to only doing the end ribs for one tank. I was still intending, though, to just wet seal the rivets instead of doing the whole fay sealing thing – but that didn’t go so well. It didn’t take long to put a bead of sealant on each rib and get them in place, although getting them align was a bit of a pain. I put a cleco in every third hole or so, intending to rivet in between and then remove the clecos. I even got so far as to dab extra sealant into the dimples where needed, but when I tried to put the rivets in their holes, I had a fair amount of trouble. I don’t know if the holes are a little undersized or slight misaligned or what, but they’re going to need a little work before I can rivet.

It was getting late at this point anyway, so I removed all the rivets I’d tried to insert and reverted to the fay seal method. I 100% clecoed, and then went to work smoothing out a good fillet with the squeezed-out sealant. Cleanup was a little more fun for several reasons: first, the way these ribs go in kind of smears sealant around anyway, and I also wanted to clean up all the excess sealant from the outboard tank skin, outside of the rib. This area will overlap the joint plate by the leading edge, and I don’t want any sealant buildup here to affect the fit there.

So I guess tomorrow night I’ll clean up the holes as necessary and wet set the rivets. If I can get the rest of the sealing in the right tank done tomorrow, then I’ll have three days of curing in by Sunday, so maybe I can do the water test then. Even that might be a stretch though – in addition to setting the rivets, I’ll have to finish the wiring for the fuel senders, which has to be done inside the tank itself, and that terminal has to get sealed once it’s finalized. At this point, I should probably just resign myself to another weekend going by before I’m ready to close these things out. I know I’m just dealing with arbitrary goals I’m setting rather than true setbacks, but boy, does it ever feel like sealing these things is an endless job.

Here’s the inboard rib in place with the sealant and so forth: 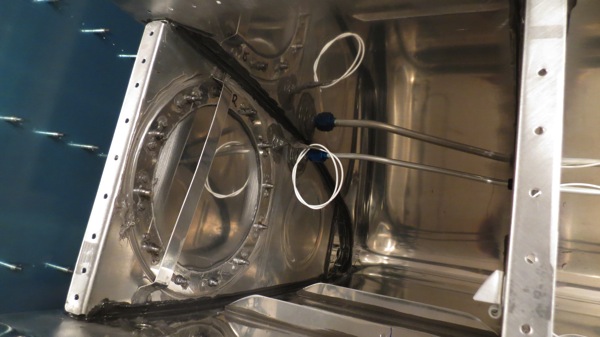