So yeah, once again, we didn’t get around to actually finishing up the tank riveting today. That was the original plan, but when I went out to remove the last of the clecos from the right tank and clean out the holes, I ran into a problem. I’d estimated that my gallon jug of acetone was about 20% full, but boy, was I wrong. It had about a cup or so left in it. Normally, this wouldn’t be a huge issue – just run to the store and get a new one – but we had a busy day, and we were already sort of cramming in a couple hours for the skin riveting. Throwing in a 20-minute trip to Home Depot seemed like enough to make it smarter to just put it off, so that’s what I did.

Instead, I focused on getting everything as ready as possible for when we finally do do the riveting. I went ahead and cleaned all the remaining holes in the right tank, cleaned up the dimples with a countersink bit, and test-fit rivets in each hole. Next I did a secondary inspection of the left tank – when I went after the proud skin rivets before, I was picky about which ones I’d drill out, since I expected it to be an ordeal, Now that I knew it was much easier than expected, I went back and was more liberal about marking rivets I didn’t like, and I ended up drilling out about ten more. Then I cleaned those dimples with the countersink as well, and test-fit rivets to make sure everything looked good. With that, I set the tanks aside; tomorrow I’ll just need to give them a final acetone cleaning before we start setting them.

The only other thing I wanted to get done today was to rivet in the inboard tank attach bracket nutplates to the left wing spar. I found when doing these on the right wing that back riveting seemed to be the most reliable method, so I did that again here, though the challenge was increased by having to work in the narrow space between wing walk ribs with the rivet gun. Instead of a back rivet plate, I used a tungsten bucking bar, which I had Josie hold in place: 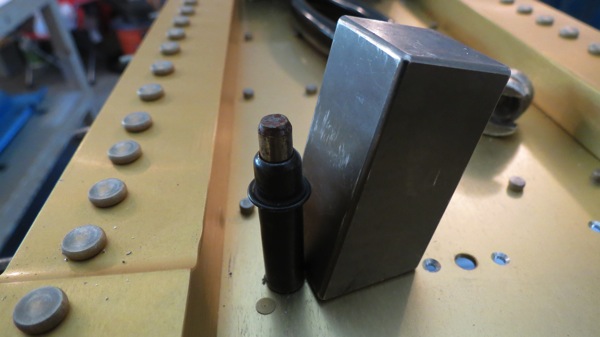 The technique worked fairly well, although one of the rivets sat a little proud. And this was when I made a stupid error. I wanted to try and knock the head down a bit, so I tried hitting it with a flush set – but it was too close to the spar reinforcement bar for me to really get on it. So then I had the “bright” idea of using the back rivet set on the thing. It’s a smaller diameter, with a flush face, much easier to get in tight by the spar bar.

Except I did this: 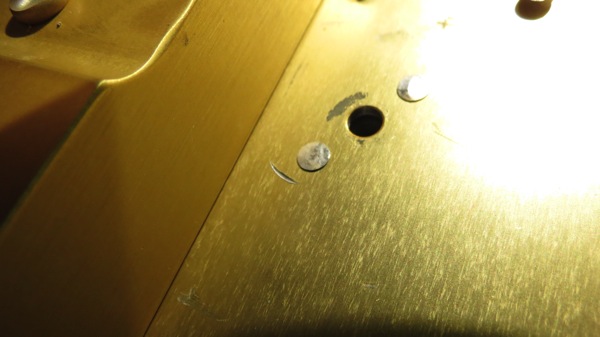 Yep, a nice little ding in the spar web. Some VAF research indicates that it’s most likely OK to dress the nick out and alodine the newly exposed aluminum, so I think I’m OK here. Still, given that this is the main wing spar, and particularly the inboard portion which will see some of the highest loads, I’ve already sent off an email to Van’s builder support. This is not an area where I’m willing to take the “eh, that looks OK” approach. Again, I’m 99% sure this is OK, but I definitely want a second set of eyes on this.

So here we have yet another recurring lesson: It’s a good idea to take some time and think about these things before just shooting from the hip. That’s when stupid things happen.