Yay for proseal! Today wasn’t so bad working with the stuff, I had more of an attitude of “I’m getting closer to being done with this” instead of “ARGH THIS IS ANNOYING.” Which I suppose is a good thing.

Anyway, I continued with my theme of being much more thorough about dimple preparation. In addition to my usual routine of getting accumulated sealant out of the holes, I hit each dimple with a countersink bit to ensure there was no buildup of partially-cured stuff. This added a bit of time to the prep, but it beats drilling out bad rivets. Other than that, it was the usual routine of dabbing sealant in each hole before setting the rivets. At least I didn’t drop the bucking bar this time.

On the other hand, when I first tried the rivet gun, it did its buzzing thing again, and for a moment I thought the entire afternoon was going to be a bust. But it worked after that and I had no problems. Still, I’m kind of wondering if I want to keep trusting this thing. I bought it secondhand and it already looked old and beat up, so maybe a new gun would be a worthwhile investment after all.

Also, after finishing up the riveting for the day, I used the leftover sealant to seal the noses of the ribs in the right tank. Previously I hadn’t been sealing this area, my rationale being that there are no rivet holes there and thus no need to seal. But after doing some research on VAF, I found that many builders felt this was a potential leak path where fuel could maybe get under the rib. In the end, I fell back to the “sealant is cheap, don’t skimp” truism and lathered that area up. I’ll do the same on the left tank at some point too.

Rib noses all sealed up: 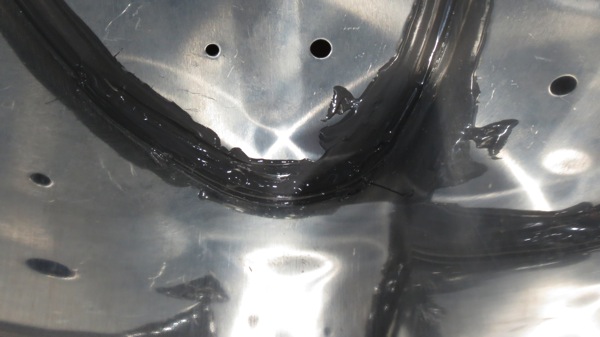 Hopefully tomorrow we can get the rest of the nose rivets done, the ones I can’t shoot solo. I also need to replace the rivets in the left tank that I drilled out. And now that I know that drilling out sealed rivets isn’t a big deal, I may go over the left tank again and be more liberal about proud rivets I want to replace. Finally, I need to re-rivet the inboard tank attach nutplates to the right spar…that’ll be a two-person job too.

I’m still hoping I can be ready to seal the baffles next weekend, though that may be asking a bit much. Maybe if I can really commit to being productive int he evenings this week…