Whew. I think I’m starting to see the light at the of the Proseal tunnel…

I still haven’t gone back and finished riveting the left tank, both the nose rivets and the ones I drilled out. We’ve talked about doing them a couple night this past week, but always either Josie was working late, or I was feeling tired, so forth and so on. I wanted to do the right tank ribs between tonight and tomorrow; Friday night to fay seal the ribs and Saturday to rivet them. I’m trying to not let a lot of time pass between those two tasks, on the off chance that sealant buildup there might affect the fit of the tank. Anyway, my conclusion was to go ahead and do all the solo stuff possible on the right tank, and then we can just knock out the two-person rivets in one session instead of two.

I was mindful tonight of all those proud rivets on the left tank, so I started by inspecting all the dimpled holes. I went so far as to insert a test rivet into each one to ensure that it sat satisfactorily flush. Almost all the holes were fine, but I did touch up a couple with the countersink for a good fit. It was a little tedious, but better than dealing with unexpected stuff.

Then it was into familiar territory of cleaning the mating surfaces, mixing up the sealant, painstakingly applying it to the rib flanges, and clecoing everything. I took a picture before I got the tank all clecoed together to kind of show the process: 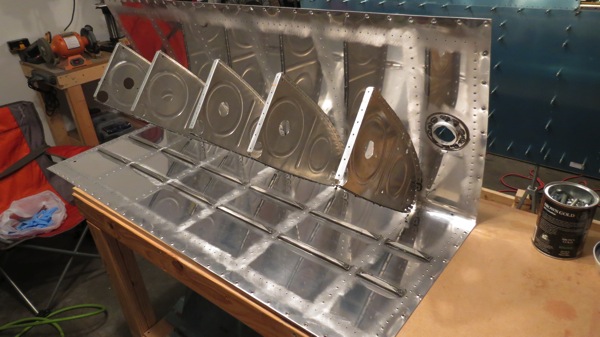 I start by putting two clecos in the upper nose of each rib (shown above), just to hold it in place while I take care of the other ribs. Next I add a few more clecos on the top before putting the whole assembly in the cradle. Then I put two clecos in the bottom rear of each rib, which pulls the skin tight all around, and then it’s just a matter of clecoing all the other holes. Then I get to go bad with a popsicle stick and work the squeeze-out into nice fillets. Finally, as before, I used the aileron counterweights and clamps to pull the trailing edges of the skin together: 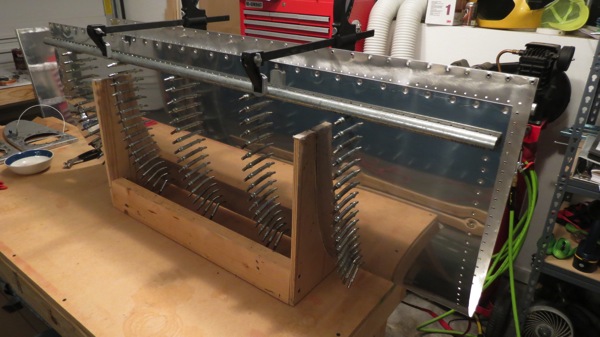 Since I had a little sealant left over, I also went ahead and installed the vent line fittings in the inboard end ribs: 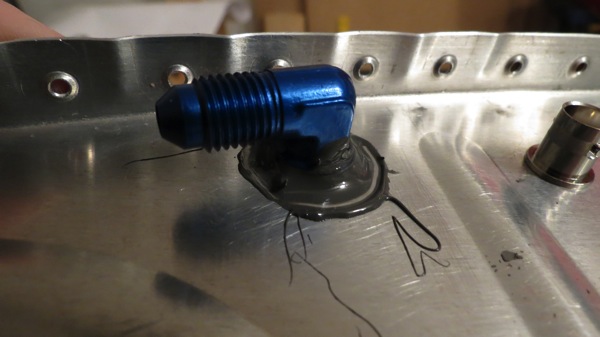 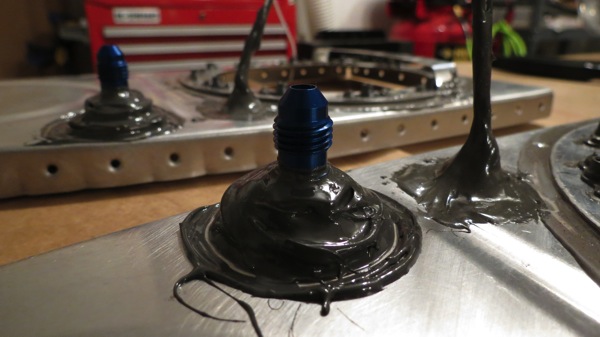 That second picture is the inboard side of the rib. I probably used way more sealant than necessary, but I figured that covering the entire nut and washer assembly was a good way to ensure no leaks. There a couple of maxims I’m keeping in mind from former builders: the first goes “Proseal, is cheap, so don’t skimp.” The second goes “If you look at a joint and say ‘I don’t think that will leak,” it probably will. If you look at a joint and say ‘There’s no way that will leak,’ you’ll probably be fine.”

So that’s it for tonight; tomorrow morning will be messy time again, doing all the riveting. Hopefully I won’t drop the bucking bar this time. Or maybe I should, so the tanks will be symmetrical…

I probably shouldn’t get ahead of myself here, but I might be to the point of closing these things out next weekend! I will be really, really, really glad to be done with this stuff.