Well, I suppose I was overdue for a good frustrating day like this. I don’t think I’ve had one of these in a while.

Things seemed to start off OK, save for me noticing that I’d neglected to dimple one of the end ribs. Didn’t really affect today’s work, but I went ahead and fixed it up. From there I set about doing some general cleanup in preparation for shooting rivets. Most notably, I pulled 2/3 of the clecos, figuring on riveting those holes then coming back for the last set. That led to the fun of cleaning out the holes. I’m starting to become a little disenchanted with this whole fay sealing process. It’s supposed to significantly cut down on the mess of riveting, and I suppose maybe it does, but the big downside I’ve seen is that when I come back the next day to rivet, I find that many of the rivet holes have sealant buildup that needs to be cleaned out prior to riveting. Bottom line, I’m not sure if I’ll continue using this method for the rest of the project or not.

Anyway, with that done, I mixed up a batch of sealant and went to work dabbing the holes, then inserting the rivets, and finally going to town with the rivet gun. This was going fairly well – actually, I was surprised how easy it was to rivet these solo. I’d kind of been expecting to need more help here. That is, until I got distracted and dropped the bucking bar, which made a couple of nice little dents in my skin: 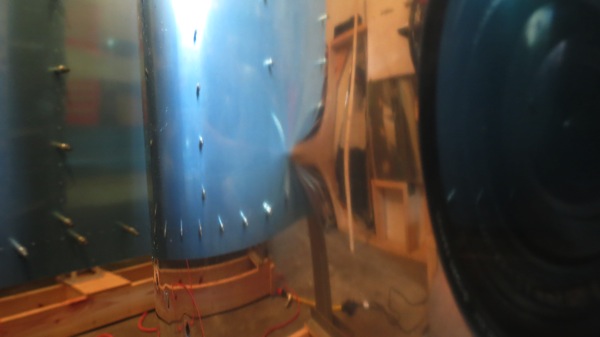 I suspect I can probably knock those back down with a flush set and a bucking bar on the inside, though the inner curve may present a problem. So yeah, from that point on I was much more careful to keep a grip on the bar. After a while (and a lot of pairs of gloves), I’d set all the rivets that were accessible with the tank in the cradle. That left the toughest ones, all the way up at the nose of the tank.

I was working on setting those when I ran across another problem: the forward most skin hole on one of the ribs had a badly-done dimple. I guess when we were dimpling this hole only got a soft hit and we didn’t catch it. Kind of a problem now, since everything is more-or-less permanently assembled. I tried dimpling with the pop rivet set I have, but if it did anything I couldn’t tell. Not really surprising though since the void between the skin and rib is undoubtedly filled with partially-cured sealant. I’m thinking maybe I can put a NAS1097 rivet in this hole; they need a much smaller dimple, and while that compromises strength a bit, it’s probably better than making a countersink. I may shoot an email off to Van’s for some support here just to be sure.

And this led to the final nail in the day’s coffin. I’d gotten Josie to come out and help shoot those nose rivets; they were too far in for me to rivet solo, even with my gorilla arms. Previously, I’d noticed the rivet gun sporadically making a buzzing sound instead of hitting when I squeezed the trigger, but it was rare enough that I didn’t think much of it and just kept pushing through. But once Josie came out and we’d shot a few rivets, the thing wouldn’t shoot at all, just buzz. I pulled it apart and I’m pretty sure I found the problem: 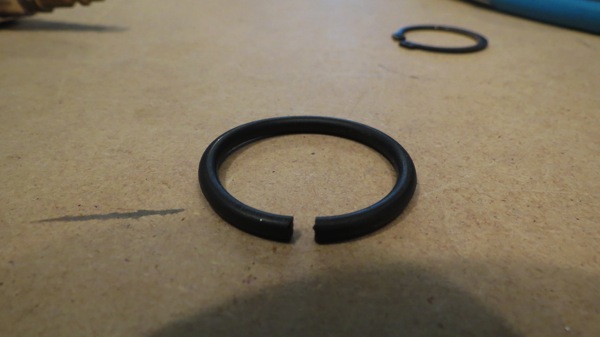 All told, this is better news than I was prepared for. I was about ready to just order a new rivet gun come Monday morning and replace this beat-up US Tools thing. But if I can replace a ten-cent O-ring and get back in business, that’ll be much better.

So in summary, I got about 80% of the rivets set, and the rest will have to wait until I get the gun fixed. Normally it would bug me to wait this long between fay sealing and riveting, but given how tightly the tank skins fit, and that the remaining rivets are at the nose where things are the tightest, I think there won’t be any issues here. So I’ll leave you with a photo of the mostly-done left tank: 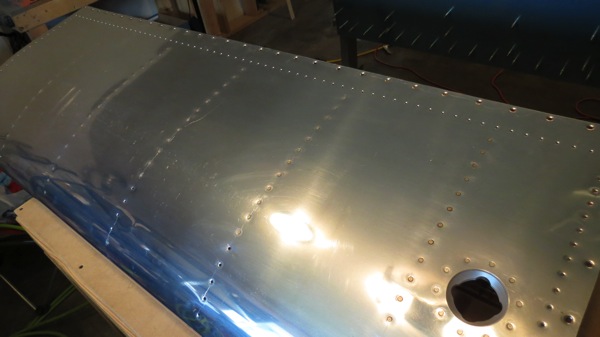 Coda: I didn’t really get at it earlier, but today I kind of hit a point where I was really tired of messing with sealant. I’ll be glad when I’m done with this stuff. On the other hand, this rib riveting is probably the most challenging part of the tank build, so at least I’m about halfway through that.