So I kind of took most of the evenings this week off the project. Tuesday I had a friend from out of town come by for a bit, and Thursday I did an EAA webinar on recreational aerobatics. I could have worked the other two nights, but really, my next sealing task would be the main ribs for a tank. I knew that would be a time-consuming job and felt it would be best saved for the weekend.

Of course, this morning, I abruptly remembered that I had a few more prep tasks to do. The ribs for one tank still needed to be scuffed, and I hadn’t yet dimpled any of the ribs. So those were my first two tasks today, hitting the edges of the left tank ribs with the scouring wheel, then dimpling away with the squeezer. I wish I had thought of the dimpling earlier, specifically before I installed the BNC connectors for the senders. They got in the way of dimpling a couple holes. But the forward most holes were also inaccessible with the squeezer, so I had to get out the tight fit dimpling tool anyway.

Then it was time to clean all the mating surfaces, mix up a big batch of sealant, and go to town. Here I am painstakingly paying a bead of sealant on a rib: 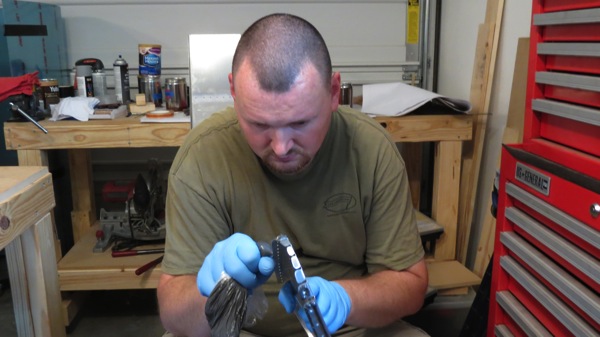 I had a little moral support along the way: 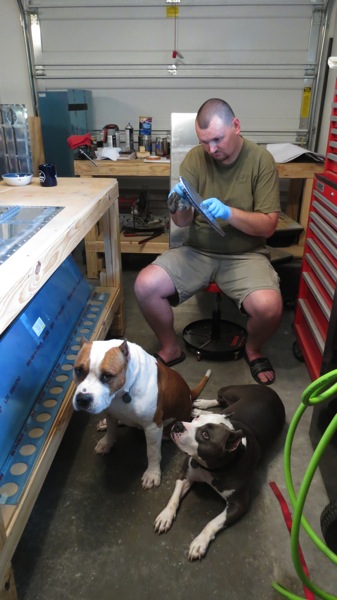 Then, once I’d gotten each rib started, it was time to cleco away. I was slightly concerned that I might come up short on clecos and need to pull some from the main wing skins, but it turned out I had plenty: 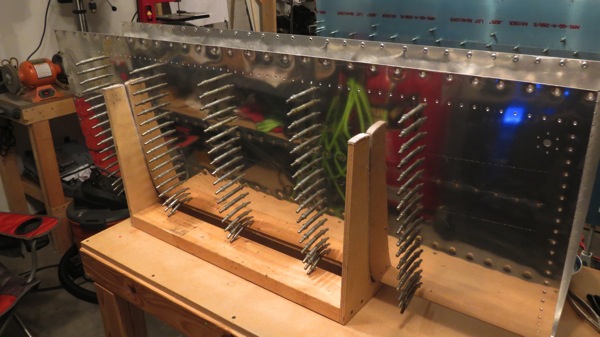 Before going in and working the squeezed-out sealant into fillets, I took care of some small tasks with my leftover sealant. Item #1 was the tooling holes in both outboard ribs. These holes were covered by the access plate reinforcements in the inboard side, but out here I had to do something different. Some guys buy 3/16” rivets just to squeeze in these holes, but I chose to just use some 3/16” pop rivets I had lying around. This isn’t structural at all, so no concern with strength. And both rivets got covered with sealant on both sides anyway: 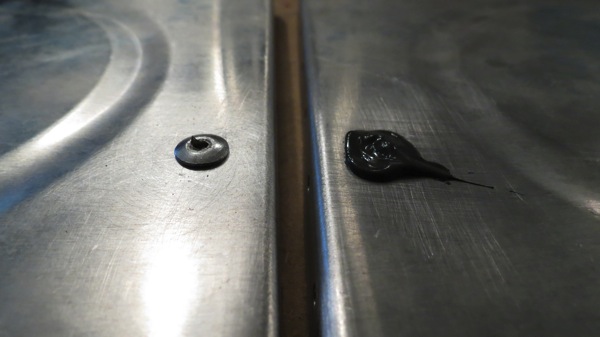 I also put the nose reinforcement plates in place and clecoed them; I’ll rivet them tomorrow: 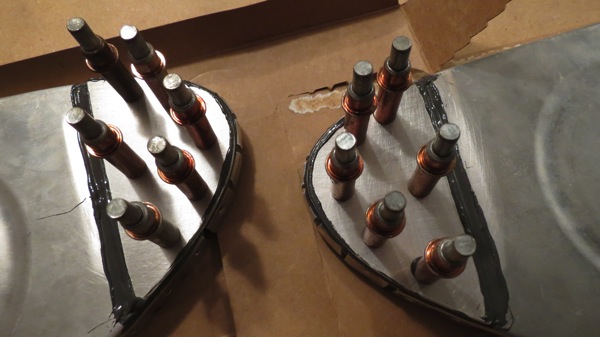 Then it was back to the tank, where I spent some time reaching in and digging around with a popsicle stick to make the seams nice. Most everything looks good, though there are a few spots where I’ll probably add some extra sealant later on: 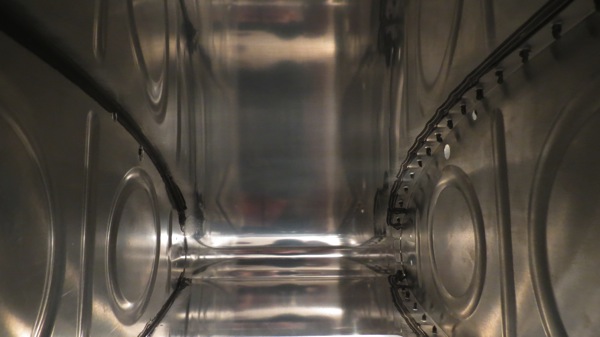 Finally, before calling it a night, I decided that I wanted to clamp the trailing edges of the skin behind the ribs. I figured this would help pull everything into assembly and maybe get a little extra squeeze out from the back ends of the ribs. Problem was, I only had two clamps big enough to cover the width of that area, but I needed to distribute the force all along the length of the skin. Oh, I know, I can use the steel pipe lengths that will eventually be the aileron counterweights: 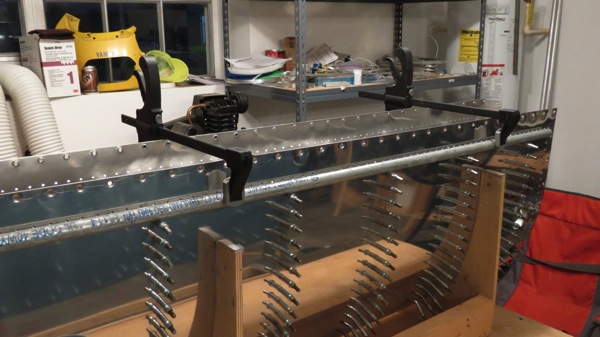 And that’s it for now. This is the easy part; tomorrow we get to go in and buck a whole bunch of rivets. Later on I’ll fay seal the end ribs in place, but first I’ll have to put the sender plates and the vent tube in. Which reminds me, I still need to install the vent tube fittings in the inboard ribs…