So the main order of business tonight was to seal over the shop heads of the stiffeners I riveted Friday night. But since applying sealant isn’t an exact science and I hate to waste more of the stuff than I have to, I’m trying to keep a few small jobs prepped so I can make use of leftover sealant. Tonight I decided my “extra” items would be some of the connections for the capacitive tank senders. This whole system won’t go together completely until the tanks are almost ready to be closed up, but some reassembly can be done. One part is the wire connecting to the BNC connector on the inboard rib, the other is the wire to the outboard plate. Final assembly will consist of attaching the unterminated ends of both these wires to the inboard plate.

So I dug out the soldering iron, which I don’t think has seen the light of day in quite some time (actually, it took me half an hour to find the thing). The BNC connectors get a short ~12” wire run; it only has to cross one bay in the tank. Soldering those took far longer than I’d like to admit. Yeah, it’s been a while, I’m kind of rusty. The second wire run was ~48”, since it has to cross four bays, and this run terminates with a simple ring terminal. The instructions recommended soldering in addition to crimping here for additional security, which I did.

With the soldering done, I scuffed and cleaned the mating surfaces on the inboard ribs and the outboard sender plates, along with the terminal assemblies, then put everything in place, the BNC connectors in the ribs and the ring terminals screwed to the plates. Then it was time to mix up the sealant.

After putting the sealant in my application bag and dabbing all the shop heads, I had plenty left over for all the terminals, so I went to town. These actually use a fair amount of sealant, since you want to thoroughly cover any exposed wire as well as the terminals themselves. I ended up sculpting little volcanoes on the BNC connectors, and the ring terminals – well, I’m not sure what to call those other than straight-up blobs. 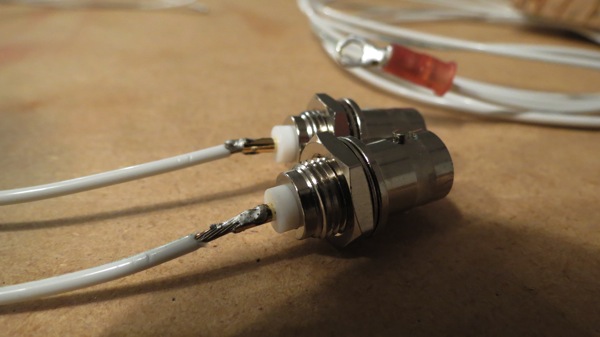 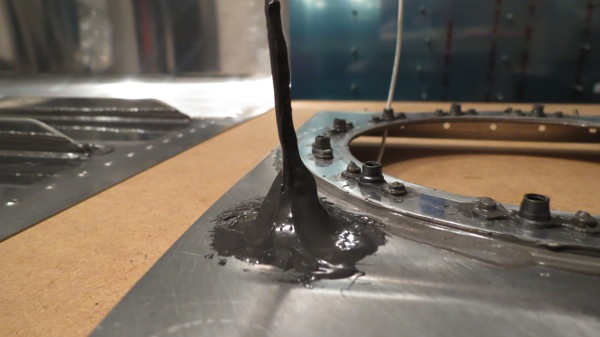 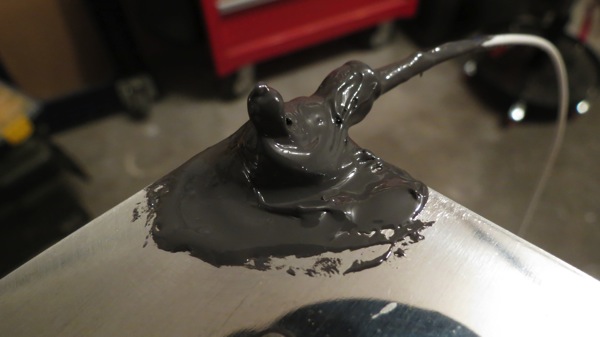 In other news, I got my final shipment from Spruce today, which contained my Whelen landing lights:

I’d previously bought a little 12V power supply specifically for testing stuff like this, so of course I went out in the driveway after dark to test them out. They’re pretty bright, though in fairness I’m barely 20’ or so from the fence. I should probably be testing them individually to get a better real-world look; in practice, one light will be aimed as a landing light and the other as a taxi light. At least that’s the plan for now…