I think I’m starting to reach the point where I’m tired of tank sealant. Which is unfortunate, since I’d estimate I’ve maybe done 30% of the sealing tasks on these tanks.

Anyway, I popped out after dinner and went to irk on the stiffeners – removing the clecos, cleaning the holes, swirling sealant in the dimples, placing the rivets, and finally back riveting. It’s almost absurd how fast the actual back riveting goes compared the painstaking work of inserting those rivets without getting sealant everywhere. It’s been a while since I had an Official See, I Really Am Doing The Work On This Thing photo, so I got Josie to come out and snap a few pictures while I was placing the rivets: 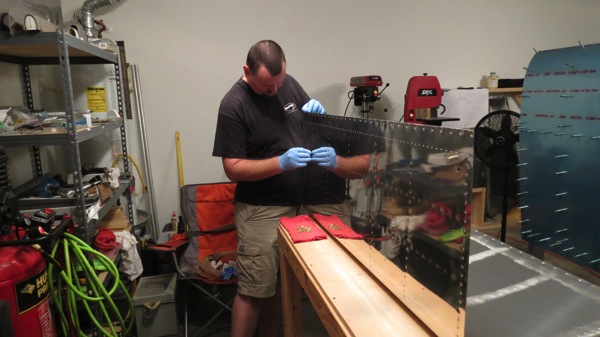 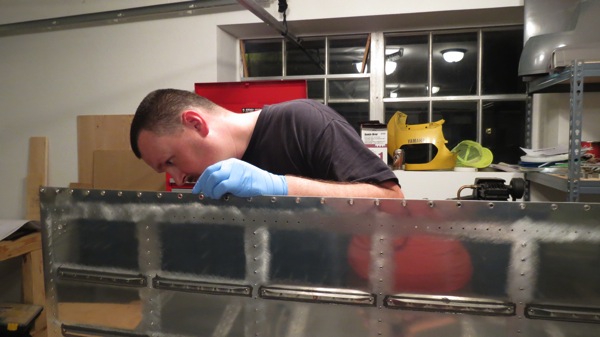 Next up, I wanted to rivet the fuel cap flange in place. This was just as much of a hassle as last time. I thought that I’d learned some lessons on the other one that would help here, but that didn’t seem to be the case. On the plus side, the new rubber-surrounded flush rivet set I bought is much better about staying in place. But I still clinched two rivets and had to drill them out and replace them. I also squeezed the two rivets that hold the anti-rotation bracket on the access cover I put together last time out.

I had a lot of sealant left over, which I’d intended to use to cover the shop heads of all those rivets, but it had already gotten pretty stiff by this point, and I was kind of over dealing with the stuff for the night anyway, so I quit while I was ahead.

In other news, I placed some orders this week for some important items. I’ve decided to go with the leading edge landing lights instead of waiting and hoping that Aveo Engineering actually has a workable Ziptip kit out in the next couple years. So I ordered two Duckworks Aviation light mounting kits along with a pair of Whelen LED units. I also ordered a pitot mount kit from Gretz Aero – and since that came from Spruce, I also ordered some other misc stuff, most notably some extra piano hinge wire. I’ll be needing that to make the final hinge pin for the fuel tank trap door and the elevator trim tab, and besides, it can’t hurt to have some extra material lying around. Most everything came in today except for the Whelen lights, which I should have on Monday.