So today’s goal was to rivet the reinforcement rings I sealed previously, and then get the stiffeners sealed in place on at least one of the skins. By combining tasks like this, I can avoid sating sealant; I hardly need any to seal while riveting, to the point that it’d be hard to mix up a small enough batch for there to be no waste. Instead, I’m going to shoot for doing one large sealing task at the same time as doing the small task of sealing rivets. The fun part of this is being really sure of preparation. Once a batch of sealant is mixed up, it has a working time of a couple hours, so it’s important that everything is ready to go.

I started out by roughing up parts. The stiffeners themselves came first, and I took care of some other small parts while I was at it: gas cap flanges, drain flanges, and the anti-hangup guide for the right tank that goes on the outboard rib (no need to seal the other ones since its attachments won’t penetrate the tank exterior). Then I put my scuffing wheel in an air drill and went to work on the skins. I learned during this time that the drill will consume air about as fast as the compressor will pump it; basically the compressor ran nonstop the entire time I was scuffing, and even the breaks I took to switch skins weren’t long enough for it to catch up.

Here’s one of the scuffed skins: 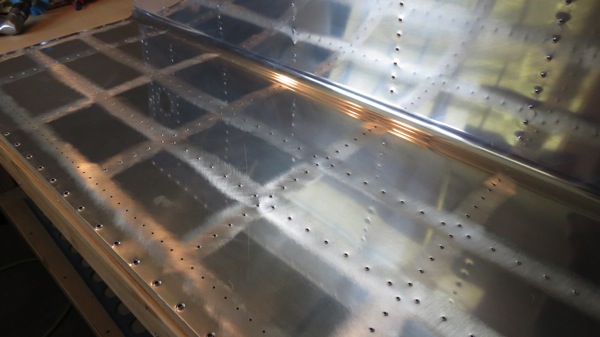 OK, so much for prep work. I made sure everything I needed for the reinforcement rings was laid out, and got to mixing up a 4oz batch of sealant. Just look at this lovely goop: 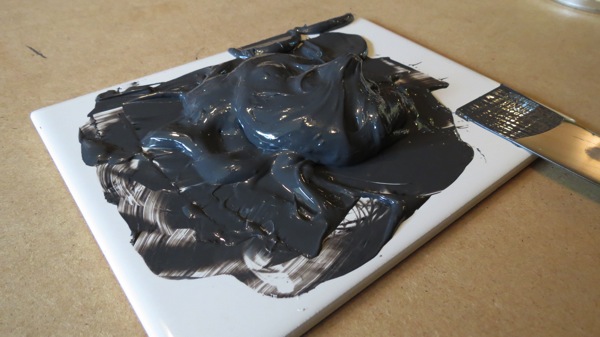 Next part was pretty easy. I removed half of the clecos, used a Q-tip to swirl a bit of sealant in each dimple, placed the rivets, squeezed them, then did the other half. Repeat for rib #2 and done. Finally, all the exposed rivet heads on the interior get sealant swirled around them to ensure a good seal.

Finished rivets. Hard to see, but there’s a little dark ring of sealant around each head: 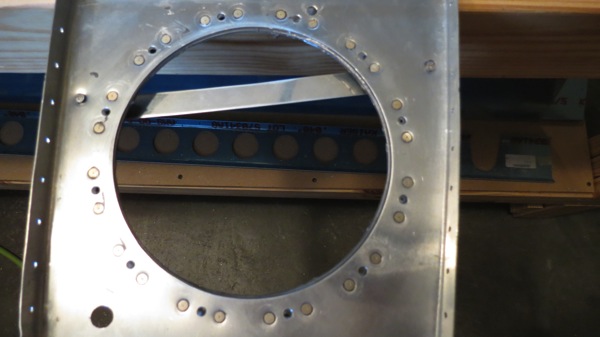 I also went ahead and put the anti-hangup guide in place and riveted it. Here you can see that and also the sealant covering the interior rivet heads: 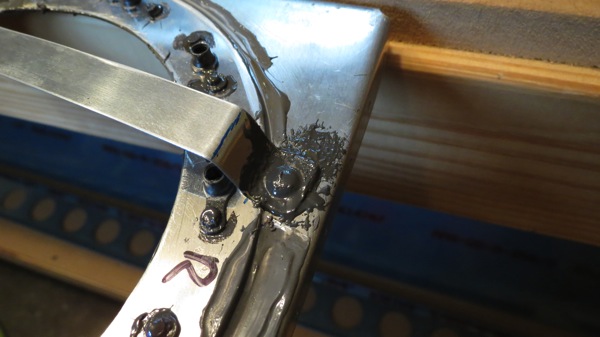 And then it was on to the stiffeners. I scraped the rest of my mixed sealant off the tile and put it in another food bag with the corner cut off. Got the skin on the table, cleaned the mating surfaces, and started laying a bead of sealant on the first stiffener. Then I ran into my first problem. Seems I made the corner hole in the bag a little too small, which in turn caused me to squeeze it a little too hard while laying the bead. I was looking at the bag bulging in my hand and wondering if there was going to be a problem when…there was a problem. The bag split. And here I am with a sealant-covered stiffener in one hand and a ruptured bag in the other.

Fortunately Josie was around, and she fetched me a fresh bag and then held the stiffener by a clean part while I transferred the sealant to the new bag and cut the corner (larger hole this time, thankyouverymuch). Then back to laying the sealant bead. This is a pretty tedious job for sure, holding a tiny part in your hand while carefully squeezing the sealant out. Especially since  was now nervous about the bag ripping again…

As I finished each stiffener, I just laid it in place on the skin, no clecos. Only after all the stiffeners had sealant on them did I go back and 100% cleco them in place. Confirmed good squeeze-out of sealant all around, then went to work making a fillet with a popsicle stick. I did end up squirting some more sealant on the back side of the stiffeners (where the flange bends up). I could see that sealant had squeezed out of those spots, but I wanted to be really, really sure. I don’t want to close my tanks, find out they have leaks, and then have to figure out how to patch them. Better safe than sorry, etc, so forth and so on…

Stiffeners in place with finished fillets all around: 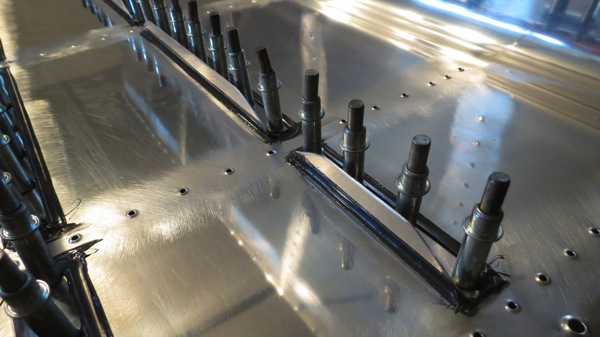 And a long shot of everything: 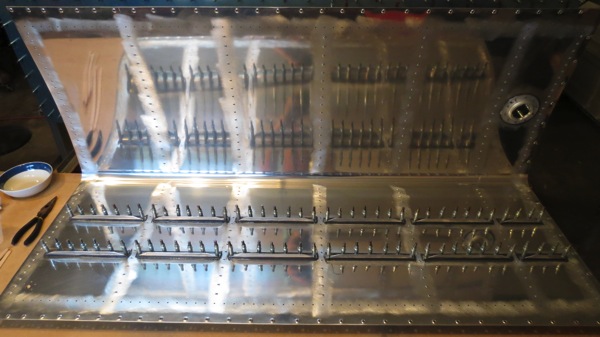 I still had a little sealant left over in the bag, so I went ahead and put the right gas cap flange in place as well: 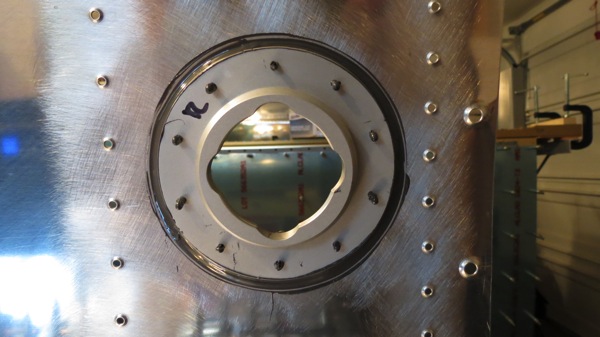 So tomorrow I should be able to back rivet all these stiffeners and then get the left tank stiffeners in place as well. I’m knocking off early so we can go have dinner out together for once…it’s been a while.