Boy, I really wish I’d done this yesterday…but my chronic bad back become acute, and I spent most of the day in bed. Went and got some drugs today, so I’m feeling better.

Goal for the night was to rivet the stiffeners and gas cap flange that I fay sealed Saturday. First, though, I needed to clean my mixing tile. I was somewhat amused to find that the putty knife had become more-or-less permanently attached to the tile. It was pretty easy to remove with a razor blade, but before that I stopped to get a humorous photo: 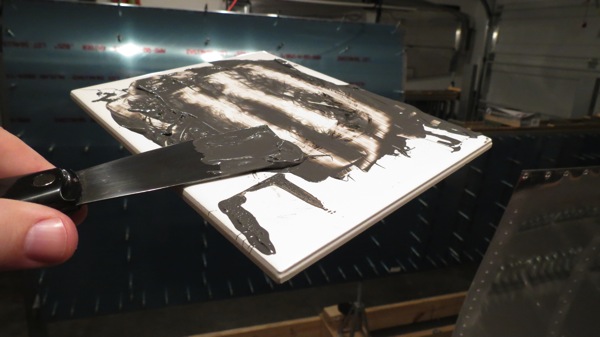 OK, on to the fun part. Remove the clecos from the stiffeners and make sure everything is ready for the rivets. I learned a bit of a lesson with the rings I did before: the fay sealing process tends to leave sealant in the rivet holes, which gets in the way later. I had lots of this with the stiffeners, so I wanted to clean it out first. After trying a few things, I ended up just running a #40 drill bit at low speed through the holes.

Next I mixed up a batch of sealant and put a dab on each dimple. Then a rivet in each hole (TEDIOUS), followed by rivet tape. At least the back riveting went pretty quick; I forgot how easy back riveting is. I think I did all the stiffener rivets in about 20 minutes.

Here I made a mistake in thinking that I was almost done; I “just” needed to rivet the gas cap flange, and then just seal the shop heads of the rivets. The fun part about the deluxe cap flange is that it varies in thickness, meaning I need different rivet lengths for different parts of the thing. And I came really close to forgetting to put the vent line clip in place. I could get to about half of these rivets with the squeezer and a 4” yoke, but the rest had to be shot. Boy, is it fun trying to hold the flush set in place with a layer of greasy sealant between it and the skin…I botched one rivet and had to replace it.

Finally, that frustrating thing was done and I just needed to seal the shop heads. I strongly considered leaving this for another night, but most of the sealant I’d mixed up was left over, and it would have just gone to waste. Rather than swirl the stuff in place with a q-tip like I did with the rings, I loaded it up in another bag and deposited giant dollops on each head. Bit messier, but hey, it’s the inside of a tank, who cares what it looks like, right?

Stiffeners and cap flange with the shop heads sealed: 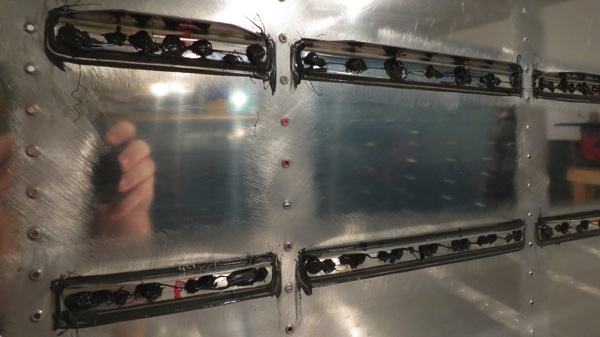 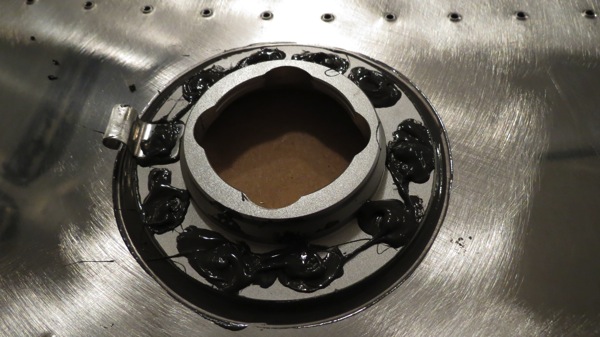 And that’s all! I’m thinking maybe tomorrow night I’ll fay seal the left stiffeners and plan on riveting them Wednesday night. Tonight’s lesson was that the gas cap is a job all its own, so I think I’ll leave the left cap to be done at the same time as the drain flanges. I’m also a little worried now about riveting the skins for these things… it’s going to be tedious holding the rivet gun still for all those, especially while reaching way inside to buck too.