Well, this night didn’t go exactly as planned. My original intent for the night was to rivet the reinforcement rings I sealed up last night. I probably could have gotten that done tonight no problem, but I had to complicate things. See, I’d need to mix up sealant again and put a dab in each rivet hole before squeezing, but the issue I had was that I doubted I could mix up a tiny enough batch to not waste a significant amount. So I decided to try and combine tasks tonight; in addition to riveting those rings, I could attach and seal the gas cap flanges too!

Only problem with that was that I still had one skin prep task left: countersinking the rivet holes between the skins and the baffles. The directions say to countersink these holes instead of dimpling; the apparent reason is so the baffle can slide into place more easily during final assembly (the baffle goes on last). A fair number of people go ahead and dimple the skins and baffle anyway, and most report no issues with inserting the baffle even like this. I considered this a bit, but in the end I decided against it mainly because the baffles look like they’d be very difficult to dimple; the flanges on them are rather narrow, putting the holes close to the baffle web. Tight quarters indeed.

Anyway, for reasons that I no longer remember, I wanted to get this countersinking done before I attached anything to the skins, including the caps. So I busted out the first skin and went to work.

By the way, there are a lot of skin-baffle holes. My right arm actually feels a little stiff and sore now from pushing the drill for all those holes. Long story short, it took far longer to do that countersinking than I expected. I was almost two hours in by the time I finished up, and it was creeping up towards 11:00.

I actually started to lay things out to mix up some sealant and get to riveting, but then I thought it over and decided to call it a night instead. I would have felt rushed, and maybe messed something up in the process, especially since I would still have had to scuff and clean the gas cap flange mating surfaces. Definitely best left for another night.

Here, look at a photo of some countersunk holes: 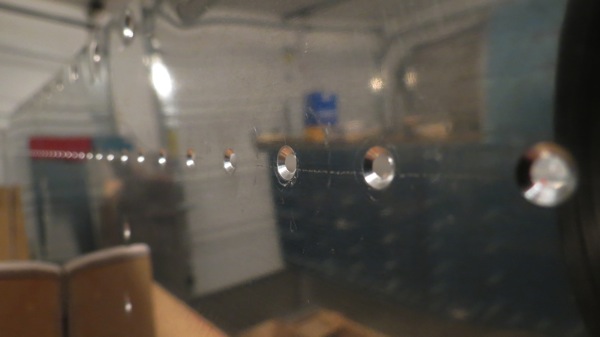