Spoiler alert: I got all the right tanks stuff finished up today. That just leaves deburring and dimpling, and then it’ll be time to break out the sealant…

First up, I addressed the trapdoor from yesterday. I decided to go with my idea of putting a shim between the hinge an the rib, extending further forward to give some additional support. So I just cut a strip of .020” sheet to size, deburred it, and got to clamping and drilling.

Drilling the top hinge half to the rib: 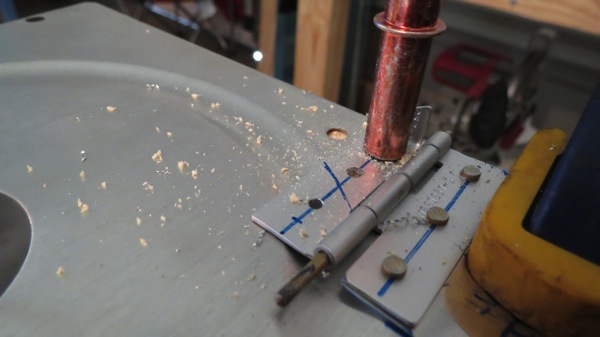 And the completed assembly in place: 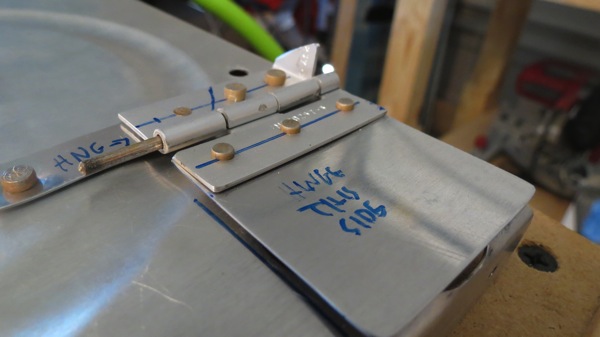 I did make one kind of dumb mistake with this though. The end of the shim (to the left in the photo) got distorted as I was squeezing the rivet. For the two -4 rivets in the hinge, the correct orientation was with the manufactured head against the rib (thinner material). But then I got on autopilot and did the same orientation for the last one, which was wrong – in that case, the shim is the thinner material. Sure enough, it distorted a bit when I squeezed the rivet. It looks ugly, but should be structurally sound – so I left it. The trapdoor itself doesn’t quite naturally sit flush against the rib, but in practice it’ll have the weight of fuel on it to help it seal a little better. And in any case, I doubt I’ll frequently be doing the kind of flying where this thing will be needed.

Next up were the anti-hangup guides for the flop tube. These presumably exist to keep the flop tube from getting hung up on stuff in the tank – the plans don’t explain much, they just show where to put them. The first guide goes across the access plate hole. The plans show this guide riveted to the plate reinforcement ring, but that would leave some space below and also block the access hole itself. So I decided to move it further back and make it longer, which necessitated having it rivet to the rib outside the trim ring.

Everything went well and I was feeling quite pleased with myself until I realized that the upper end of the guide was going to interfere with the cover reinforcement. Well, that’s a bit of a problem, especially since I’d already drilled the holes in the rib for the guide. I could relocate the top end further aft, but that would leave me with an open hole to plug – which isn’t really a huge deal – but more importantly, it would put the top end far enough back that the flop tube might get caught on the guide itself. Kind of counterproductive.

After thinking it over, I decided to notch the ring to fit around the guide. I don’t believe there’s an issue with material strength here – this area has three layers in total, the rib itself which is riveted to the reinforcement, and the cover plate which will be screwed into the nutplates on the ring. With a bit of trial and error, I had a good clearance notch: 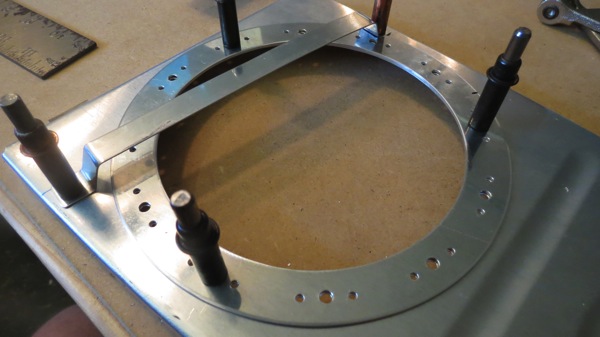 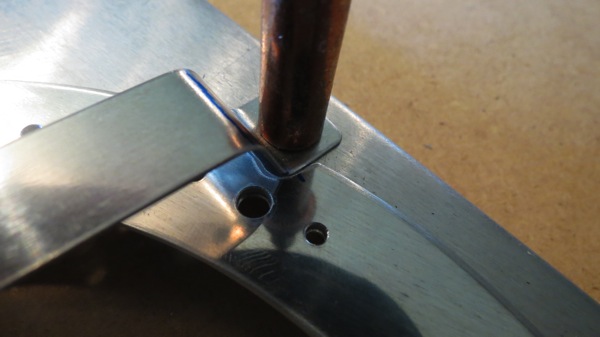 I’m still going to run that little mod by the VAF gang as a sanity check. Worst case, I have to replace that ring, which isn’t a huge deal.

Next up I fabled the second guide, which runs at an angle between the second rib and the rearmost stiffener. This was easier since I didn’t have other stuff to get in the way, but kind of odd since the guide has a twist in it. Nothing really to it though. Finally, I put the inboard rib in place and installed the flop tube to see how it interacted with the guides.

Normal resting position (where this thing will probably spend 99% of its life): 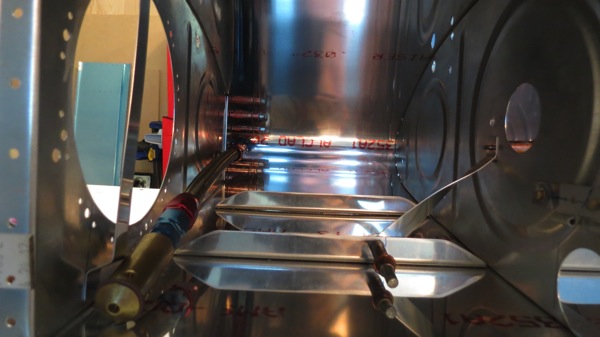 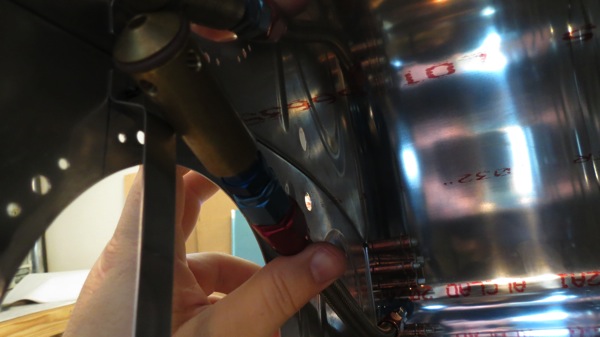 And the tube swung out to outboard: 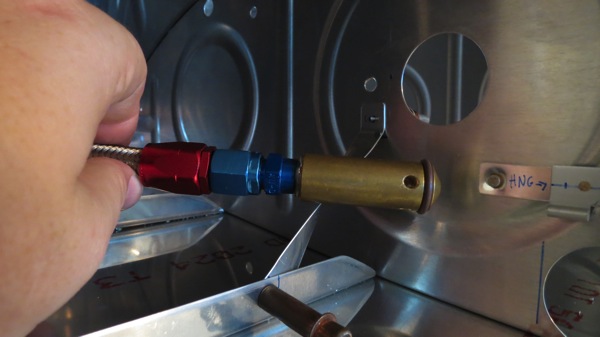 That made the inboard rib almost complete; the only thing remaining was to make the hole for the fuel sender connector. Five minutes with the unibit and that was done. Then I moved on to fitting the gas cap and drain flange. Nothing to really see here that wasn’t shown in the left tank, but I did actually cleco the drain flange from the inside this time to show how it will look, and more importantly, to do a quick test fit with the drain fairings. 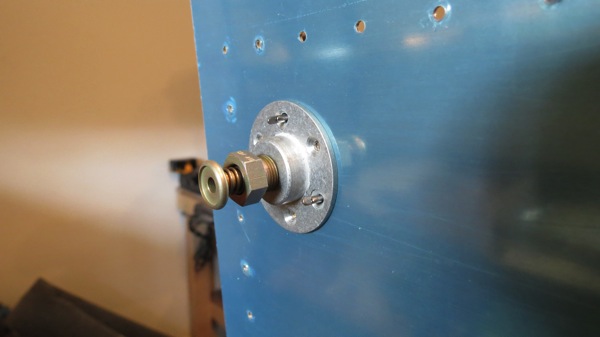 Flange with fairing. Looks much better, and I’m sure the small children who will actually see this will be appreciative: 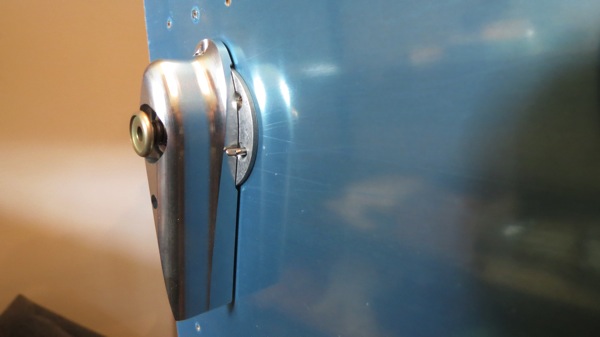 That just left the fuel vent line; I rolled off a length of tubing, cut to rough length, flared the inboard end (after botching the first try), and slid the thing into place. Then I dropped in the inboard rib and put the two bends in that bay to match the tube up to the fitting. Looking good: 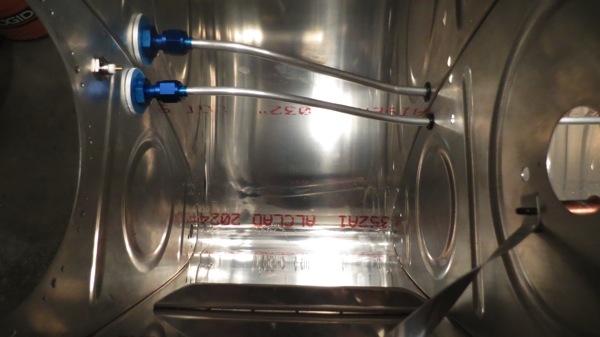 That only left one more thing: drilling the spar screw holes to final size. I’d put this off because a while back, I read about someone having problems with these holes cracking when they were dimpled. H recommended drilling them to a larger size, which I considered, but ultimately rejected. Instead I just drilled them to the normal size, and I’ll take extra care to clean the inside of the holes before dimpling to help stave off any potential cracks. I also pulled the left tank off the stand to final drill those holes in its skin too.

So that’s it…that makes this Deburring Week. And maybe next weekend will see my first sealing session…time to get messy!