Tonight’s goal was straightforward: to lay the groundwork for the impending marathon of deburring and dimpling. Basically, I wanted to take down both tanks and in the process, take care of deburring anything that wasn’t either a rivet hole or the edge of a skin. The second part was almost entirely done anyway, as I’ve been tending to deburr along the way as I took care of tank bits. The only items I found that really needed attention were both access covers and the thick aluminum washers that will go on some of the AN bulkhead fittings. Deburring the washers may have been overkill, but oh well…

So here are my tanks as of now: 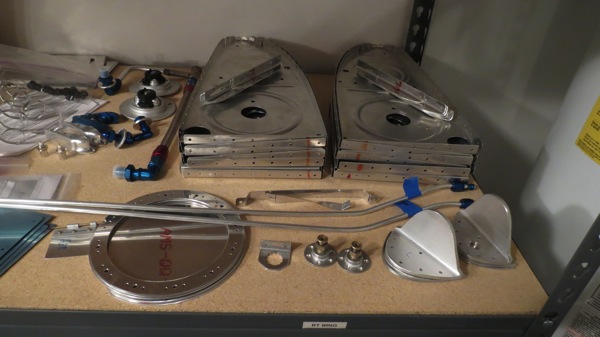 In a way, it feels weird to take everything down like this, but I also know that it’s the preface to final assembly.

In other news, I’ve decided to keep the notched doubler ring that I made yesterday; consensus is that it’s not a problem. I also second-guessed my decision to leave the tank screw holes at #21 before dimpling, so today I ordered a #17 reamer. That will let me open the holes up a bit while also leaving a better hole finish than a drill bit would. I also ordered a good set of wire strippers, which I’ll need for the fuel sender wiring, and last but not least, I’ll soon have a safety wire kit in hand. I’ll need that to safety the flop tube to the bulkhead fitting, and I’ll probably also do something similar to retain the hinge pin for the right tank trapdoor.