So I stopped at Home Depot on the way home as planned and snagged a shiny new air hose. The good news is that I have a new hose. The semi-bad new is that they had only two lengths, 50’ and 100’. I got the 50’ hose, which is roughly twice the length I should ever need in this 20×20 garage. Which in turn means that I now have perpetual hose slack lying around. Might have to figure out some way to store this thing at some point…

Anyway, after dinner I headed out, grabbed the drill and #40 reamer, and went to town on the skin holes. About 90 minutes and several hand cramps later, all the holes were match drilled, and I removed and stored the lower skins. Then I pulled out the right leading edge parts, clecoed that whole assembly together, and set it in place on the spar. I was in the process of clecoing it to the spar when I ran across another clearance issue with the wing stand: the leading edge skin interfered with the upper outboard arm. The previous owner of the stands had cut a slot there previously, but it wasn’t deep enough to accept my skin. 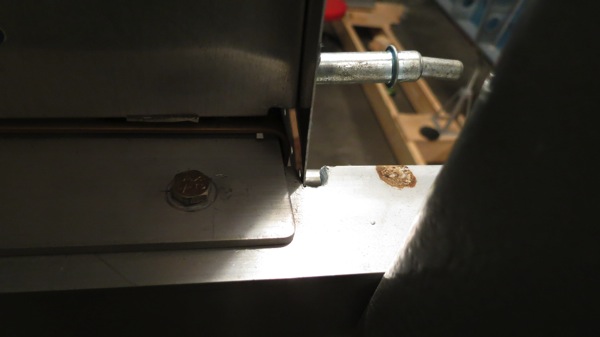 Nothing that couldn’t be fixed with the Dremel and a cutting bit though. I took some material off the other slot on that same arm just to make sure I had plenty of clearance over there. Then I really did cleco the leading edge in place for good: 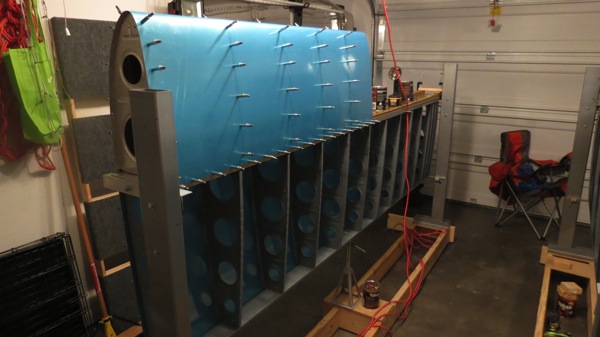 That’s it for the night. I think I’ll start tomorrow by match drilling the leading edge; that’ll free up some clecos for use on the tank. Plus I might as well match drill now instead of waiting, since I’ve got the thing clecoed in place. I know from experience that it’ll come off and go back on several times, but once match drilling is done I can just use minimal clecos to hold it in place.