Another so-so weekend. Josie had to help out with some testing with her job Saturday, so I had visions of getting up early with her and putting in a long productive day in the garage. That was before I realized she’d be spending that entire time on a conference call. Her work area is right by the garage door, which I leave open while working to help cool the place. And my first task would be match drilling, which would provide a double noise whammy of the air drill and the compressor cycling, which would in turn probably have a negative effect on her call.

So I instead took care of a couple work things of my own, and also spent some time doing some long-delayed improvements to this blog. The main thing I wanted was to start tallying up the hours I’ve been logging. I’ve put this off for a long time because I frankly hate getting into the guts of WordPress. Fortunately, I found another RV guy who was using some custom WP plugins, so I grabbed one of his and made some modifications to get the behavior I wanted. So now on the sidebar, there’s a running total of hours spent overall, plus numbers by each category link. Looks like I’m in for about 360 so far, so based on the Van’s estimates of 1600 hours, I’m maybe 25% done with this thing. I’d better start getting more productive on weekends…

Anyway, I did get out in the garage for a bit Saturday evening to get the right leading edge match drilled. Straightforward stuff, nothing much to speak of. Then I got the inboard leading edge rib – the one that’s not drilled at all – fitted it in place, and drilled the holes that attach it to the spar. I then moved on to the tank joint plate. Having learned from my mistake on the left wing, I took a different approach here.

The fun after doing this is trying to get the rib aligned; about all you can do is measure the joint plate protrusion from the skin and then try to match this measurement to the rib. It’s tedious, and I was getting frustrated, and just generally not feeling like I was in a good state of mind, so I abandoned the task and went in for the night. Better that than to misdrill and botch some more parts.

Today I was in a better mood, and got that rib aligned and drilled properly pretty quickly. After checking the holes to make sure they were fine (they were), the next task was to drill the tiedown hole. When I checked the location of the prepunched hole, it seemed off a bit, so I used a needle file to move it a bit before drilling to full size. I’m to really sure I improved anything, and I suspect I may have made the situation worse. The end result was a hole that doesn’t quite line up with the tiedown bracket: 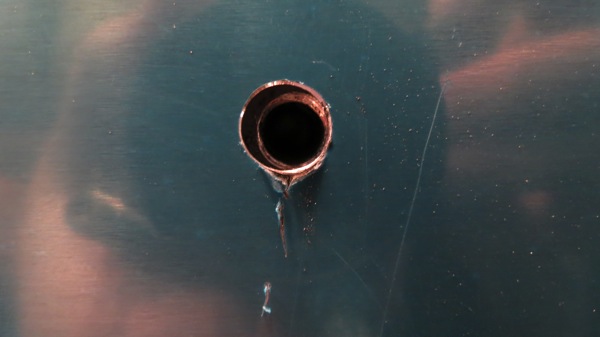 But the tiedown ring still goes in OK, so I’m OK with how things ended up: 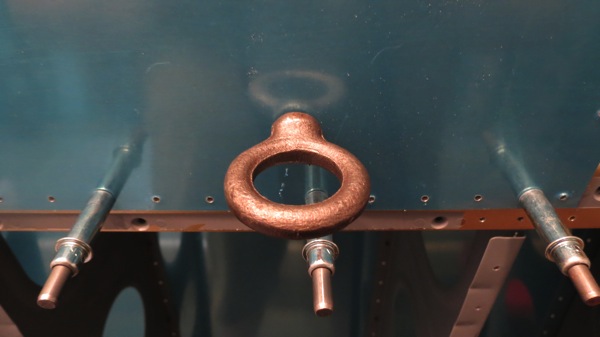 I may file the edge of the hole around some more when I take the leading edge assembly off though; I’m concerned the tiedown threads might be cutting the skin there, and I don’t want any accumulating damage from that.

Next up were the tank attach angles. The inboard one was already drilled, but the other six still only had their center hole drilled. I went through each of those, match drilling using the prepunch spar holes, then marked each for its location. Next came the sacrificial nutplates I’ve been using as drill guides; with the nutplate attach holes drilled, I countersunk by hand for NAS rivets, then took the angles out to be cleaned and primed. Like the left angles, I masked the face that will mate with the tank, since it’ll be covered in sealant.

That’s all for today…now it’s time to cleco the right tank together and get that thing fitted!