OK, so not much done tonight. After eating dinner and chilling for a bit, I was about ready to head out and get to match drilling, when I remembered something: I’d meant to stop at Home Depot on the way home from work, to pick up a second air hose. All I have right now is one of those little curly jobs, which has been a bit of a stretch to get just to the other side of the left wing. It might reach all the way to the far side of the garage (i.e. the top of the right wing), but it’d probably be really tight.

Oh well. At the least the hose should reach the bottom of the right wing, so I could at least match drill that and leave the top for later. I was just starting to get set to stretch the hose over when I decided to take a quick look at the directions – you know just for funnies. And I’m glad I did, because I completely forgot to make the wing walk doubler for this wing. That’s supposed to come before clecoing the skins into place. Whoops.

To follow the instructions to the letter, I’d have to completely remove the inboard top skin, since it’s supposed to be used as a drill guide for the doubler. Well, that would be kind of a pain, so I figured out a better way. The wing walk doublers are exactly identical, so I just pulled the left doubler and used it as a template for the right one. 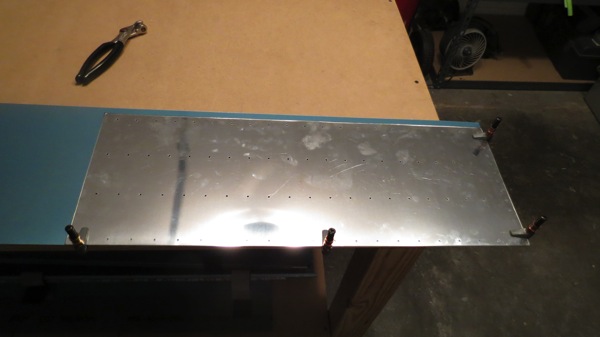 Drilling the holes using the left doubler as a guide:

Then it was just a matter of deburring the holes, putting the left doubler back in place, and sliding the right one in place as well. I decided to just call it a night instead of trying to work out the air hose issue. Now I just have to decide what hose to get. I had a nice spring-loaded wall mount reel back in Atlanta, and it was nice, but I don’t have a good place to mount such a thing here without making big holes in the walls, and since we rent…yeah, that’s a no go. I should probably just get a regular straight hose instead of another curly thing, but then I have to worry about rolling the thing up between uses. Harumph.